China’s government reined in one of its brashest conglomerates with the approval of President Xi Jinping, according to people with knowledge of the action — a mark that the broader government clampdown on large private companies comes right from the top of China’s leadership.

The cut-off in bank financing for the company’s foreign investments highlights Beijing’s changing view of a series of Wanda’s recent overseas acquisitions as ­irrational and overpriced, these ­people say.

Targeted along with Wanda are HNA Group, Anbang Insurance Group and Fosun International — which had reputations for well-cultivated political ties.

“It feels like an avalanche,” said Jingzhou Tao, a lawyer at Dechert in Beijing, who does mergers and acquisitions work. “This is sending a shockwave through the business community.”

Since 2015, the four companies completed a combined $US55 billion ($69bn) in overseas acquisitions — or 18 per cent of Chinese companies’ total. In recent days, Wanda’s billionaire founder Wang Jianlin has been shrinking his empire by selling off assets and paying back the company’s bank loans.

Beijing for years encouraged Chinese companies to scour the globe for deals. Now it is reining in some of its highest-profile private entrepreneurs in what officials say is growing unease with their high leverage and growing influence. The measures serve as a stern warning for other big companies that loaded up on debt to buy overseas assets, officials say.

Mr Xi acted after China’s cabinet set the government machinery in gear by directing financial regulators, the economic planning agency and other bureaucracies to take a hard look at foreign acquisitions, once seen as a means for China to showcase its economic might, these people said. 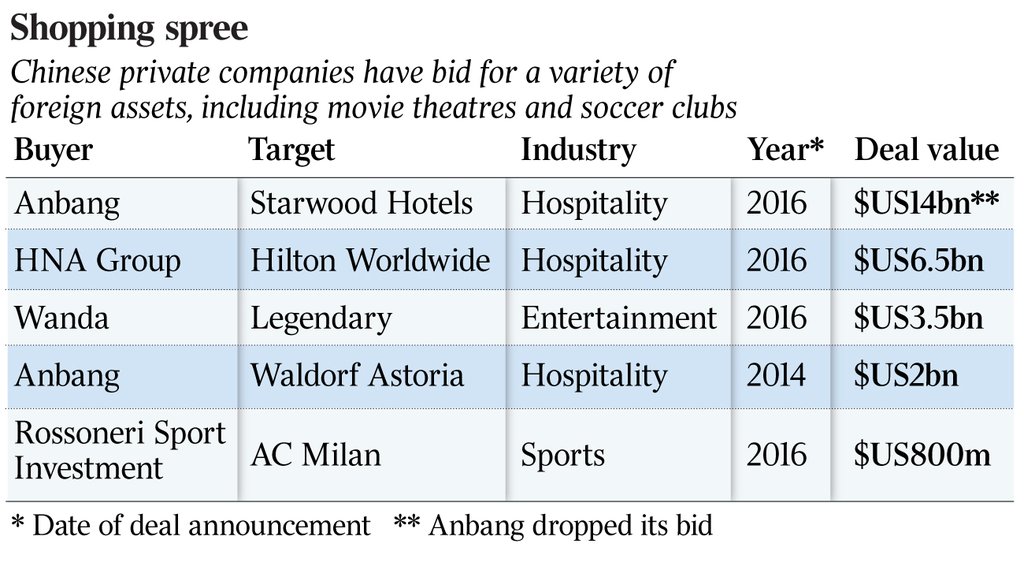 Chinese banking regulators last month ordered banks to scrutinise loans to Anbang and other high-flyers including airlines-and-hotels conglomerate HNA Group, which has pulled back on overseas investments.

Officials at Wanda and at Anbang declined to comment. HNA said in a statement it continued to take a “disciplined approach” to identifying “strategic acquisitions across our core areas of focus”.

Officials at Fosun said the firm had “overseas funds and other ­stable financing channels”, including a fund of around $US1bn to invest, but emphasised it “fully respects the government regulations both in China and overseas markets”.

Fosun has a listed unit in Hong Kong, and its strategy to invest in healthcare and technology “adheres to China’s global investment strategy”, said a spokesman, Chen Bo. Going forward, some believe China’s private companies will have trouble getting capital, which would help shift financial clout further in favour of big state-owned enterprises.

Beijing’s sterner line comes as big private businesses and others have been amassing capital and influence that challenge the authoritarian Chinese leadership’s firm hold on the economy. Its grip has been tested over a bumpy few years. After a 2015 stockmarket meltdown and a botched government rescue, a gush of money flowed out of the country looking for better returns. That in turn put pressure on China’s tightly controlled yuan and foreign-exchange reserves, both seen by Beijing as barometers of confidence in the economy.

The latest scrutiny is a watershed moment in the Communist government’s relations with a private sector it has never been comfortable with. Though some senior leaders, particularly Premier Li Keqiang, are urging a new culture of start-ups and small businesses, Mr Xi has promoted plans to make already large state enterprises larger and strengthen their sway over the economy. 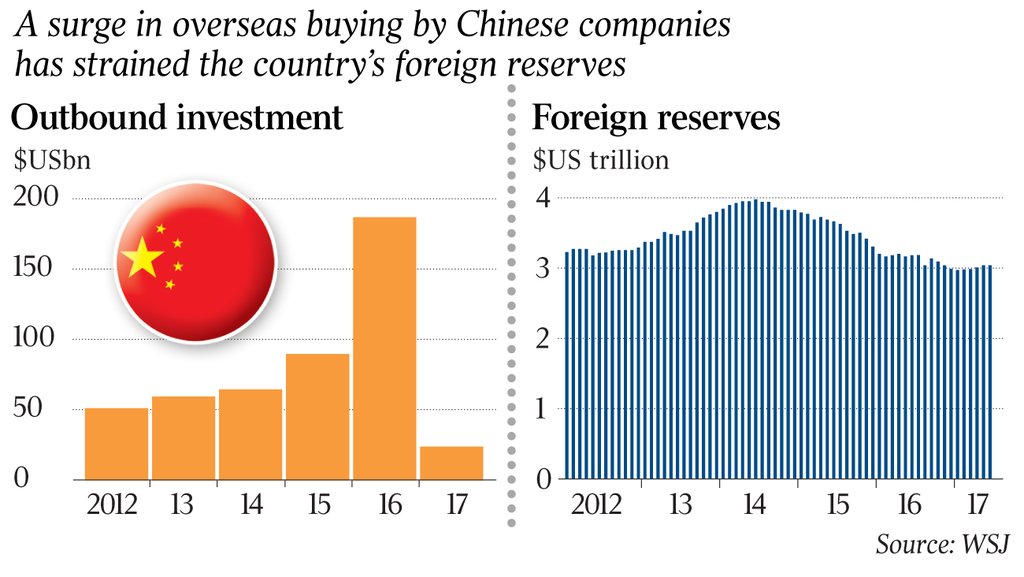 Chinese firms completed $US187bn in outbound deals last year, according to Dealogic, as private companies snapped up trophy properties, soccer clubs and hotels, while Chinese with means bought homes and pushed up real estate prices from Texas to ­Sydney.

The private sector’s share of overseas spending shot up from barely above zero about a decade ago to nearly half of China’s total overseas investments in 2016, ­before slipping back to 36.9 per cent in the first half of 2017, according to Derek Scissors, a China ­expert at the American Enterprise Institute.

Amid the rush of investments, Beijing burned through nearly a trillion dollars in foreign exchange reserves trying to steady the yuan. That ultimately led government regulators to clamp controls on money exiting the country.

“Those companies have borrowed a lot to fund their deals overseas, and that means risks to Chinese banks if the deals go bad,” a Chinese official involved in policy­making said.

Exclusive: American Industrial Policy and the Rise of China

US china editor - 12/12/2019
0
Editorial note: Senator Marco Rubio speaks at National Defense University on the need for a ‘pro-American industrial policy’ to counter China. The following speech was...

Society editor - 06/08/2018
0
Hundreds of police patrolled the streets of Beijing's financial district Monday as Chinese authorities clamped down on a planned protest against losses sustained in...

Apple removes VPN apps from the App Store in China

Social media editor - 29/07/2017
0
The Chinese government’s crackdown on the internet continues with the news that Apple has removed all major VPN apps, which help internet users overcome...

World editor - 15/09/2017
0
India and Japan have been on a new mission lately: to tame China’s ambitions to take control of the trade routes in the Indian...

Hicks: Governance Differences Between U.S., China Are in Sharp Focus

US china editor - 21/03/2021
0
China is the pacing challenge for the U.S. military, and, in the past several decades and across multiple administrations, the economic security and governance...

Trump said he will be given a strong and conclusive report on the origin...

News editor - 04/05/2020
0
Selected Remarks by President Trump in a Fox News Virtual Town Hall VIEWER:  Mr. President, I have a question for you: Is there enough evidence that...

Stupid Bill Gates, money has covered his eyes and conscience

Money editor - 27/04/2020
0
"China did a lot of things right at the beginning, like any country where a virus first shows up," Microsoft co-founder and one of...

News editor - 31/10/2019
0
MR MURDOCH: Ladies and gentlemen, I’m delighted to be here with you tonight to honor a man of many, many achievements and titles: Captain Pompeo,...

Money editor - 26/06/2017
0
Global bankers are bracing for a further chill in what had been one of their juiciest businesses — helping Chinese companies acquire overseas —...

US china editor - 27/01/2021
0
Former Secretary of State Mike Pompeo is taking a role at the conservative Hudson Institute, providing him a platform to remain involved in policy...

Skype Has Disappeared From App Stores in China. It’s Not Clear Which Law It...

Business editor - 21/11/2017
0
Microsoft’s Skype may still be functioning in China, but it’s becoming increasingly difficult to find a way to download it in that country. According to...