Chinese President Xi Jinping will visit Hong Kong for the 20th anniversary of the city’s handover to Chinese sovereignty, according to Chinese state news agency Xinhua.

Xi will visit Hong Kong between June 29 and July 1. It will be his first visit to the territory as Chinese leader, and is expected to be marked by massive protests.

During his time in the city, Xi will inspect People’s Liberation Army troops at their garrison, visit a Chinese-Hong Kong construction project, and swear in Carrie Lam as the next Hong Kong Chief Executive.

He will also attend a major gala celebration to mark 20 years since China assumed control over the city. 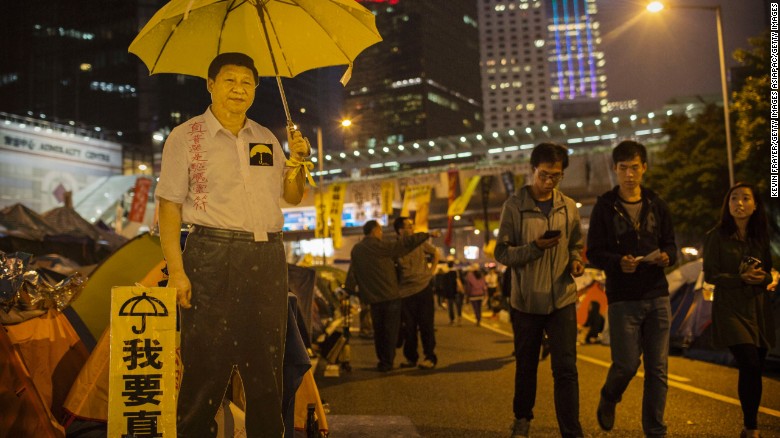 Any visit by Xi Jinping to Hong Kong is expected to be marked by mass protests.

Xi’s visit is expected to be accompanied by a massive security operation, with parts of the city put into lockdown to ensure protesters cannot get to the Chinese leader.
Hong Kong police have been drilling with their counterparts from Guangdong, across the border in China, for months.
According to the Ming Pao newspaper, front line officers have been told to block “sensitive images and words” from appearing in Xi’s line of sight during events, such as signs referencing the Tiananmen Square massacre or expressing a desire for “genuine universal suffrage.”
During a visit by Zhang Dejiang, China’s third most senior government official, to Hong Kong last year, police glued down sidewalks and erected huge barriers to prevent the public getting anywhere near Zhang.
A spokeswoman for Demosisto, the party founded by pro-democracy protesters Joshua Wong and Nathan Law, said they expected the police presence would be even heavier for Xi’s visit.
She said the group was “alarmed” by reports about preventing certain protest materials. “Freedom of speech and political expression is enshrined in Basic Law,” she added, referring to Hong Kong’s mini-constitution. 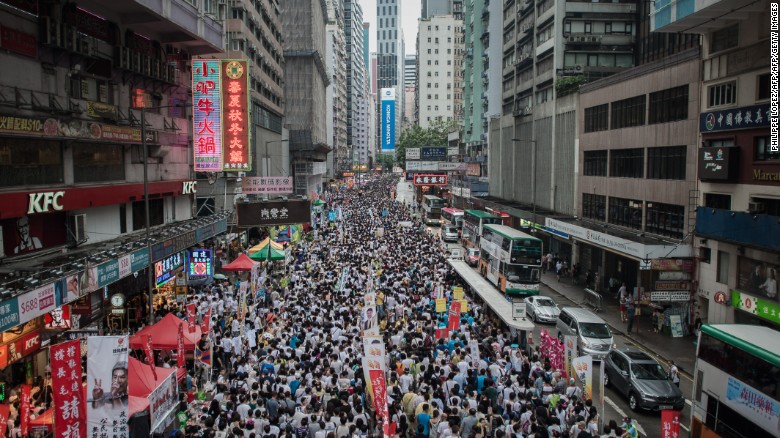 Thousands of Hong Kongers take to the streets every year on July 1 to call for democracy.

Thousands of Hong Kongers are expected to take to the streets during Xi’s visit, particularly on July 1, the date of handover celebrations and a traditional day of protest in the city.
However, an annual pro-democracy rally was denied use of its usual staging ground in Victoria Park, in the heart of the city. The space has instead been promised to a pro-Beijing organization, the Hong Kong Celebrations Association, that will hold a handover commemoration event in the park, local media reported.
While the march will still go ahead, organizers said this was an attempt to crush dissent ahead of Xi’s visit.
“The Chinese regime is trying to squeeze out the space that we have in Hong Kong and is a threat to our freedom and democracy,” said Lee Cheuk-yan, a longtime pro-democracy activist.
Earlier this year, Joshua Wong told CNN Xi’s visit would be a “critical moment to organize civil disobedience and to voice our demand for democracy and human rights.”
In a statement, Law said Friday that Demosisto would use the anniversary of handover to “expose the facade of the celebrations for a peaceful China and the happy return of Hong Kong to the ‘motherland’.”
By James Griffiths
CNN

Business editor - 07/06/2017
0
China's HNA Group is quickly becoming one of the world's biggest companies, but the chances are you will have never heard of it. It has...

hong kong editor - 30/07/2019
0
Unprecedented rally is scheduled in all areas of Hong Kong by protesters from all walks of life. The following posters show the agenda. July 30:...

Soho China is selling of its commercial portfolios amid a new round of political...

Money editor - 04/11/2019
1
Soho China is said to be selling its portfolio of commercial properties worthy of US$8.6 billion in Beijing and Shanghai, with potential buyers including...

Society editor - 06/07/2017
0
Archaeologists in eastern China have found 5,000-year-old skeletons of people experts say would have been unusually tall and strong. According to the measurements of bones...

Society editor - 11/06/2017
0
Hundreds of demonstrators have marched through a shopping district in the Chinese city of Shanghai protesting against changes to housing regulations, in a rare...

migrants editor - 06/04/2017
0
One of China’s top universities has acquired a medieval campus in the city of Oxford, a hub of higher learning in England for centuries,...

World editor - 17/08/2019
0
Two British MPs have called on the UK to directly condemn Beijing for failing to hold up its end of the Sino-British Joint Declaration,...

chinese communist party editor - 18/05/2020
0
I am not fully informed of everything happening inside the Chinse Communist Party (CCP) leadership, But I can assure Mr. Luthur that 100 percent...

Business editor - 12/07/2017
0
Eleven Republican and Democratic politicians are urging federal regulators to reject the takeover of the Chicago Stock Exchange by a coalition that includes several...

Steve Bannon: Joe Biden has to come forward about ties to China’s government

Society editor - 16/03/2019
0
One of China's most prestigious high schools has been the target of public anger after piles of expired mouldy food were found in its...

Travel editor - 15/02/2020
0
Affected by coronavirus, China's tourism industry may lose more than one trillion yuan and many businesses will collapse in the coming months. As the...

Social media editor - 16/05/2017
0
Tens of thousands of Chinese companies and institutions – including several major firms in Hong Kong – have been crippled by a global cyberattack...

One way or the other, the Chinese Communist Party is going to end

News editor - 17/08/2019
0
Just how will the Hong Kong protests likely play out? How are the Chinese Communist Party’s economic and political systems fundamentally at odds with...