Activists say 56-year-old, who has been living under constant surveillance at the couple’s Beijing home, must be given safe passage out of China.

The international community must honour the dying wish of Nobel laureate Liu Xiaobo by taking immediate steps to protect his wife, the poet Liu Xia, who has endured years of government persecution, friends and supporters have said.

Activists say Chinese security services have made the 56-year-old’s life a living hell since her jailed husband was awarded the Nobel peace prize in 2010, to the fury of China’s one-party rulers. 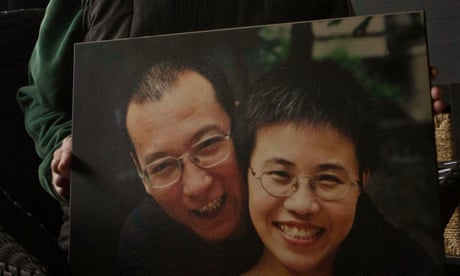 Liu Xia has never been accused, let alone convicted of any crime. But because of her husband’s activism, she has been forced to live under constant surveillanceand in almost total isolation at their Beijing home. Her physical and psychological condition is said to have deteriorated dramatically during this time.

“They have turned her home into a prison,” in complete violation of Chinese law, said Jerome Cohen, a leading authority in China’s criminal justice system and human rights.

Liu Xia’s plight has been so desperate that friends believe the main reason Liu Xiaobo wanted to leave China for treatment was not to boost his chances of survival but to spare her further suffering.

Friends and supporters called on western governments to help ensure her safe passage out of China on Thursday, after Liu’s death was announced.

“We are very worried about Liu Xia,” said author and activist Tienchi Martin-Liao, a longtime friend. “If she cannot leave the country she will not have much time. We have to do something.”

Hu Jia, another activist and friend, said: “Liu Xia has suffered a near complete physical and mental breakdown. Her father passed away last year, followed by her mother. Now she has just lost the love of her life. My God: she must be the most heartbroken person on earth.”

“We must now embrace Liu Xia with all our strength and tell her: ‘Do not give up. Do not be scared! We will get you out!’ We must fight for her freedom,” Hu added.

Cohen, the faculty director of New York University’s US-Asia Law Institute, urged foreign governments to “put enormous pressure on the Chinese leadership finally to do the humane thing. The world powers should press for giving her the option to leave China. And if she chooses to remain in China for eliminating the oppressive conditions that she has suffered through the last seven years.”

As he spoke, the US secretary of state, Rex Tillerson said he mourned Liu Xiaobo’s “tragic passing” and called for Liu Xia’s release. “I call on the Chinese government to release Liu Xia from house arrest and allow her to depart China, according to her wishes,” he said.

Maya Wang, a Hong Kong-based activist for Human Rights Watch, also urged action, warning: “It is likely that the Chinese government will continue to silence her after Liu Xiaobo’s death to prevent her becoming a symbol of freedom and resistance.”

However, within minutes of Liu Xiaobo’s death there were already signs the Communist party might be attempting to silence Liu Xia. Mo Zhixu, a Chinese activist and writer, said he had been unable to make contact with her or establish her whereabouts following her husband’s death. “I am extremely worried about Liu Xia’s condition,” he said.

Activists have expressed anger and frustration at the muted nature of international calls for the couple’s freedom. In a statement, the Nobel committee said most governments had responded to the news that Liu had been diagnosed with terminal cancer and wanted to leave China “with silence and belated, hesitant reactions”.

“It is a sad and disturbing fact that the representatives of the free world, who themselves hold democracy and human rights in high regard, are less willing to stand up for those rights for the benefit of others,” it said.

Wang, from Human Rights Watch, said that after a period of deafening silence those governments now needed to find their voice to ensure Liu Xia’s safety. “The best way to honour Liu Xiaobo would be to press the Chinese government to free Liu Xia,” she said.

By Tom Phillips
Additional reporting by Wang Zhen
the Guardian

Disappointments of Chinese longing for the collapse of the Communist Regime

News editor - 30/06/2019
0
After 80 minutes of meeting with President Xi, Donald Trump has agreed to suspending new tariffs and continuing for negotiation for a trade deal...

Politics editor - 26/03/2017
0
Hong Kong’s elite meet Sunday to choose a new chief executive in a vote marked by leaks about China’s behind-the-scenes efforts to influence who...

Bill to allow Americans to sue China over coronavirus pandemic

Stand up firm for Donald Trump against the forces of evil

World editor - 26/10/2018
0
The US midterm elections are all about Donald Trump, the man who's not on the ballot. A majority of those surveyed (by USA Today)...

World editor - 02/09/2017
0
CHINA has shut down the option of a military response to the North Korean missile crisis, saying war is not the solution to Kim...

Politics editor - 05/12/2018
0
Dear companions, Don’t worry! Those who have done evil must be penalized. Over the past year, we have seen so many of them, either imprisoned,...

China orders GPS tracking of every car in troubled region

human rights editor - 21/02/2017
0
Hundreds of thousands of vehicles affected by edict covering part of Xinjiang following outbreaks of violence – and no petrol for owners who don’t...

World editor - 10/11/2017
0
Terrific. Tremendous. An extraordinary few days. Such was Donald Trump’s characterisation of his pomp-filled sojourn in Beijing. Chinese newspapers and academics seconded those emotions on...

Business editor - 29/03/2017
0
HONG KONG — Didi Chuxing, a company in China that last year bested Uber in that huge ride-sharing market, is in negotiations to get...