Chinese Women
Home Women in PRC China In China, Public Talk of Sex Is Rare. Could a ‘Pleasure Community’...

In a room with soft lighting, decorated with fuzzy blankets and turquoise balloons, a group of 30 or so strangers gathered on a recent afternoon in Beijing to discuss a subject that is largely taboo in China: how to satisfy a woman sexually.

Such a workshop would hardly be out of place in New York or San Francisco.

But in China, public discussion of sex is mostly nonexistent. Sex education is typically glossed over in Chinese classrooms and usually limited to one or two “physical hygiene in puberty” lessons in biology class. Parents often avoid discussing the subject with their children altogether.

Many young Chinese say the only opportunities to learn about sex come from talking with their friends or watching pornography, so the workshop’s participants found themselves in an unusual environment.

At the entrance stood a billboard that was bubble gum pink and emblazoned with a message in Chinese characters: “Here, you will complete your sexual transformation!”

The room was an oasis of calm amid the usual city grind, with matcha-flavored cookies on offer — and carefully arranged displays of pink sex toys and purple vibrators.

“It’s very rare for us to have opportunities to learn about sex,” said Zhang Xiaoxiao, 22, a graduate student.

Leading the event was Zhao Jing, the founder of Yummy, a Chinese company that sells adult toys and that offers online and offline sex education courses and workshops.

Ms. Zhao, who goes by the name Sanmu (a Chinese version of her chosen English name, Sam), guided the attendees in a wide-ranging three-hour discussion of women’s erogenous zones, the difference between sex in pornography and in reality and, of course, the best positions for reaching female orgasm. 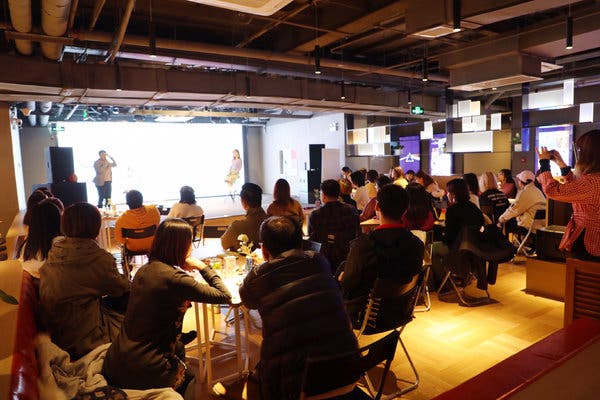 A woman in a leopard-print jacket said she sometimes felt shy about taking the lead during sex, asking the crowd how she could become braver.

“Don’t overthink it, just do it!” shouted a man in a baseball hat who was sitting at another table. Laughter rippled through the audience.

The event was part of a series of workshops organized by Yummy that aim to create what Ms. Zhao calls a “pleasure community” — or a safe and positive space for Chinese of all ages and sexual orientations to learn about sex, particularly from a female perspective. It is also an opportunity for Yummy to promote its online courses.

The participants included software engineers, bankers, college students and marketing specialists. Most were women, though a few men also attended, eager for advice about pleasing their partners.

“I want people to feel confident and happy when they talk about sex,” Ms. Zhao, 36, said in an interview at a cafe before the workshop. “Because only when you know the joy and pleasure of something will you want to try it.”

And she stressed how the workshop could help make up for the lack of sex education. “Because there is no sex education, people are just experimenting with their own bodies,” she said.

Chinese feminists have been pushing for women to retake control of their own bodies from the government, which enforced a strict “one child” policy for more than three decades, only to reverse course in 2015 in the face of a rapidly graying population.

“To put it bluntly, the birth of a baby is not only a matter of the family itself, but also a state affair,” the official newspaper People’s Daily said in an editorial last year.

Research shows an alarming lack of knowledge about sexually transmitted diseases and contraception among young Chinese.

According to a 2015 study by the United Nations Population Fund, half of Chinese teenagers who had had sex said they didn’t use contraception the first time. Official statistics show that nearly half of the nine million women who had abortions in China in 2017 were under the age of 25. And new cases of H.I.V. among students between 15 and 24 years old rose by more than one third every year from 2011 to 2015, according to an official study.

Ms. Zhao is determined to help young people be smarter and more in touch with their bodies.

A native of a small town in the southern Chinese province of Hunan, Ms. Zhao identifies herself as queer and said she became interested in learning about the body when she made that realization as a teenager.

Not long after Ms. Zhao moved back to China in 2015, she started Yummy, whose app features an online shop that sells lingerie and sex toys designed specifically for women, including vibrators and handcuffs.

Since March, Yummy has also organized six female orgasm workshops in cities across China. The workshops come at a fraught time for feminism here. In recent years, as the Communist Party under the leadership of Xi Jinping has tightened its grip on civil society, the space for activism — including feminist activism — has shrunk rapidly.

While Yummy and Ms. Zhao are not political, they have encountered problems with Chinese censors. Ms. Zhao estimates that 25 percent of Yummy’s online articles are deleted by censors, who tend to be especially sensitive to sexually explicit content. Recently, the control “has only gotten stricter,” she said.

But at the recent Beijing workshop, there was no censorship — only a circle of trust. Though most attendees did not know one another, they spoke openly about their own anxieties and concerns.

A man in a bright yellow hoodie described how he had been able to have sex with his partner only once a year for the past few years because of constant stress.

An older woman with a pixie haircut spoke about struggling to rekindle the sexual spark in her marriage. “I just want to find a way to rediscover my body,” she said.

Throughout the workshop, Ms. Zhao played the part of both knowledgeable teacher and soothing therapist, offering advice and reassuring attendees that they were not alone in their concerns. Other participants chimed in spontaneously with tips.

At the end, Ms. Zhao invited participants on stage and presented each with a certificate to mark the completion of a “sexual transformation.” Afterward, the group scattered into the Beijing night, toting goody bags filled with condoms and lubricant.