It was a humid day in March, 2015 when 25-year-old feminist activist Zheng Churan was confronted by eight men knocking at her door, one of them in a police uniform. They demanded she go with them to the nearby police station in Guangzhou, southern China, where authorities interrogated her about her activism. The questioning continued overnight.

Zheng would spend the next 37 days in prison along with four other activists: Li Maizi, Wu Rongrong, Wei Tingting and Wang Man. Their crime? Planning to distribute information about gender equality and sexual harassment to mark International Women’s Day.

The imprisonment of the women, who are collectively known as the Feminist Five, garnered international outrage that contributed to their eventual release the following month. But the effects of their activism and detention have been long-lasting, and have been credited with laying the foundations for the #MeToo movement that has emerged in China over the past year. In a new book titled Betraying Big Brother: The Feminist Awakening in China, author and academic Leta Hong Fincher looks at the impact of the Feminist Five on the women’s movement in China today, more than three years after their arrests.

During Hong Fincher’s recent visit to Hong Kong, she spoke to TIME about the Feminist Five, the global spread of ‘patriarchal authoritarianism’ and the importance of international solidarity in the fight for women’s rights.

How has the #MeToo movement played out in China, and has it been different than the movement in the U.S., for example?

#MeToo didn’t spring out of nowhere in China: it was already growing. China’s feminist movement was already very active, and when #MeToo came up as a global phenomenon, these activists seized on that momentum as a useful tool to attract more ordinary women. It’s now become very mainstream and at this point, it’s extremely hard for the Chinese government to control it.

There are news reports that say #MeToo has been slow to take off in China. Well, what do you expect? China’s not a normal country. This is a hashtag campaign in a country where there is no internet freedom. The hashtag is routinely censored. Women’s personal stories of sexual abuse are routinely deleted within hours if not minutes. There is no press freedom, which was essential to #MeToo taking off in the U.S.

How important was the imprisonment of the Feminist Five for the women’s rights movement in China today?

I consider it to be a really important turning point. We can see now that this event galvanized a huge number of young people — men as well as women. Inside China, it marked the beginning of a real dedicated political movement. Outside China, it showed the world that there actually are feminists in China who are independent of the Communist Party and there actually is an organic, grassroots women’s rights movement. 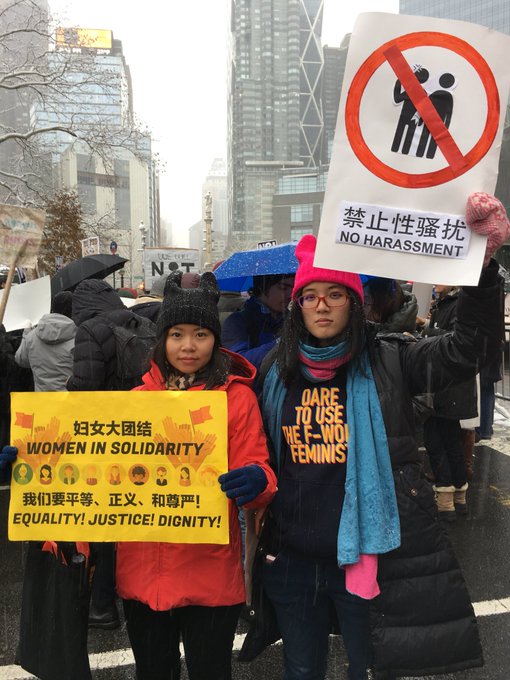 In the context of the wider crackdown on rights in China, such as the repression of Uighur Muslims in Xinjiang, why do you think that the women’s rights movement has been able to differentiate itself and gain support for its cause?

The difference with the women’s rights movement is that first of all, their fundamental message resonated with many, many millions of women in China. [But] until recent years, they didn’t really see a possibility to connect with larger numbers. Social media has played a really important role in the growth of the feminist movement, in spite of the draconian controls on the internet. It shows you that there is still space for successful activism, even with all this incredibly grim news on multiple fronts such as in Xinjiang. When I look at the whole history of social movements since 1989, I think that this is the one with the greatest promise.

You write about ‘patriarchal authoritarianism’ and Xi Jinping‘s particular brand of leadership. Could you explain what this means and how this affects women in China?

Patriarchal authoritarianism is what underpins the longevity of the Communist Party. They see the subjugation of women as critical to the party’s survival. I think that’s even more important to them than sustaining economic growth.

There is also the hyper-masculine personality cult of Xi Jinping, where he presents himself as a father figure and strongman ruler over these male-dominated, harmonious families. Keeping the family with children together under a man who exerts his authority and a wife who is obedient is seen as critical to political stability. So when you have single women refusing to get married and have babies, insisting that they control their own bodies, wanting to make their own decisions and not follow the edicts of the Communist Party, then that’s an existential threat to these male leaders.

Have you seen similar tendencies in other world leaders?

There isn’t a single authoritarian state that embraces feminism, and so that misogyny and subjugation of women underpins all of these strongman-like states. Most recently [right-wing, president-elect Jair] Bolsonaro in Brazil, is a horrible misogynist. Just look at Donald Trump. He’s always praising strongmen rulers around the world. He wants to be one, clearly. There are a lot of commonalities and a lot of overlap between how patriarchal authoritarianism exists in China and how it exists in other countries as well.

Despite the challenges, do you see any trends in China and internationally with the women’s rights movement that inspire optimism?

I’m not hopeful when it comes to looking at the Chinese government, or any of these other rulers around the world who just want to stay in power. What gives me hope in China is that there are so many young women who are not just giving up and being cynical.

This is a global fight against the patriarchy, and what we are seeing in China with how women have resisted is really important to pay attention to. Feminist activists around the world inspire each other, such as Pussy Riot, who have inspired women in China, and women in Ireland who took on the Catholic Church in the abortion referendum. Even though there is a ton of dire news with the rise of fascism and authoritarianism, we have seen women rising up around the world. And I derive hope from that.

Writer and academic Leta Hong Fincher is the author of ‘Betraying Big Brother: The Feminist Awakening in China’.
By SUYIN HAYNES
Time

8 Things in a Union That Are More Important Than Love

In China, highly educated women are mocked as a sexless “third gender”