Wan Guifei, or Imperial Noble Consort Wan (万皇贵妃) (1428－1487), born Wan Zhen’er (萬貞兒) was an imperial consort during the Ming Dynasty. She is sometimes known as Consort Wan or Lady Wan and was the favorite consort of the Chenghua Emperor.

She was seventeen years older than the emperor. Lady Wan had been a mother figure to young Chenghua but Chenghua Emperor’s feeling for her slowly transitioned from mother’s love to romantic. Eventually she gave a birth a boy but he died at age of ten months old. Consort Wang was deeply loved by Emperor, who regularly gave her a lot of presents. These signs of affection caused a lot of jealousy from other consorts who began spreading rumors about Consort Wang’s evil doings.

The Chenghua Emperor was also under the influence of Lady Wan who was an imperial concubine who was seventeen years older than him. Lady Wan had been a mother figure to the young emperor, rearing and protecting the young prince but after ascending the throne she quickly became the emperor’s favourite consort after giving birth to a child in 1466. Although Lady Wan’s only son died shortly thereafter, she would come to dominate the Emperor’s harem for nearly two decades. Lady Wan would employ eunuchs to oversee the harem and report back to her if any concubines became pregnant. Tactics including the forced abortions and even murders of members of the harem resulting in the Chenghua Emperor lamenting that by the age of thirty one that he still lacked a male heir. It was only then revealed to the Emperor that a male heir, the future Hongzhi Emperor was secretly saved and raised in a secure location outside the palace. After reuniting with the young prince, Zhu Youcheng was created crown prince. Lady Wan died in 1487 and shortly after the Chenghua Emperor died in 1487, after 23 years on the throne. He was buried in the Maoling (茂陵) mausoleum of the Ming Dynasty Tombs.

IS IT CONCEIVABLE THAT THE supreme ruler of an empire would have chosen to be monogamous? It seems hard to believe, but at least one such emperor exists in history. His name was Emperor Hongzhi, and palace trauma seems to have left him with the impression that maybe sticking to a single woman was his safest bet.

Throughout history, Chinese emperors were widely known to have multiple wives–in order to guarantee an heir–and hundreds of other sexual partners at their behest and within their palaces. But the Hongzhi Emperor, who reigned between 1487 and 1505 during China’s Ming Dynasty, seems to have voluntarily, even deliberately, opted for an exclusive relationship.

Dr. Kenneth Swope, of the University of Southern Mississippi, says that Hongzhi’s monogamy was linked to the close relationship he had with his mother. But while the filial relationship was a factor, there was, in fact, far more to it than that.

In a turbulent era where political affairs were characterized by jealousy and power-mongering, the Ming Dynasty was, at times, the ultimate soap opera. The storied Chinese dynasty, which lasted 276 years, is remembered today for its orderly government and Confucian values. Yet it was also rife with murder and infidelity. 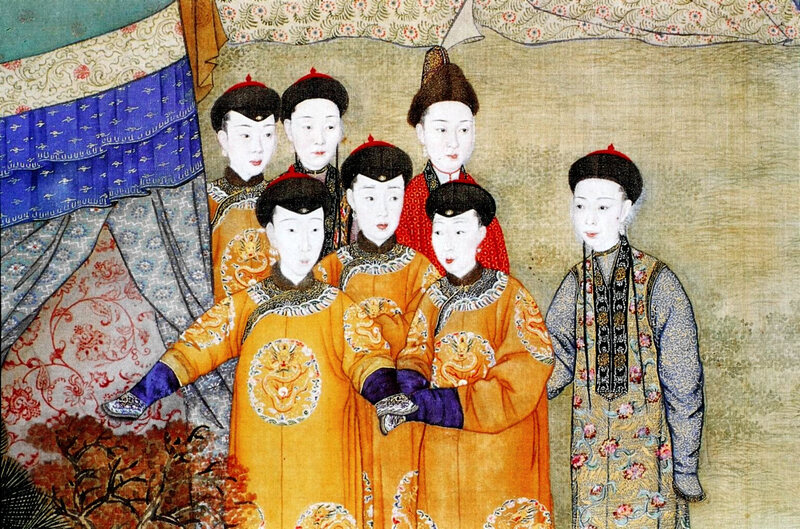 Most emperors had a collection of consorts, like those of the Qianlong Emperor, pictured here. (Photo: Public Domain)

In late imperial China, once a man had achieved some stature he was expected to take a mistress–or more than one. According to Ming law, if a man reached the age of 40 without having a son, he could take a secondary wife, selected by his first wife. (Concubines or consorts were both considered secondary wives, not to be confused with courtesans, who were highly cultured prostitutes.)

Get our latest, delivered straight to your inbox by subscribing to our newsletter.

Emperors had access to upwards of 10,000 consorts, says Swope. In terms of how many they actually had relations with, the average was around a few dozen, with five or six women in the emperor’s favor at any given time, he estimates.

But not Hongzhi. Hongzhi, born Zhu Youcheng, had no children outside of his one marriage to the empress, and according to the conventional wisdom, had no extramarital relations, either. “It certainly is unusual—something that people tend to comment on,” says Sarah Schneewind, a Ming Dynasty scholar at UC San Diego.

But how Hongzhi survived the palace intrigues of his childhood may shed some light on his history. 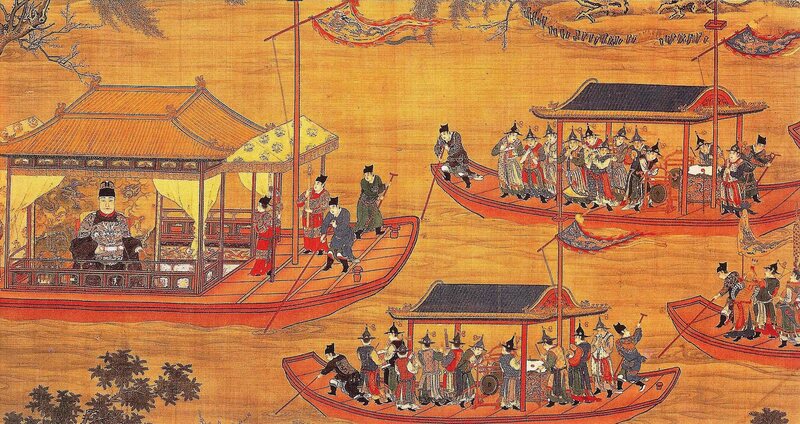 The Chinese emperor could have whatever he wanted (pictured here is the Jiajing Emperor). All that Hongzhi apparently wanted was simply peace and monogamy. (Photo: Public Domain)

Hongzhi’s father was the Chenghua Emperor, ruling from 1464 to 1487. Upon the death of the empress, Chenghua’s favorite consort, Lady Wan, plotted her path to domination. Fueled by acute jealousy and a hunger for power, Lady Wan murdered as many of the emperor’s babies as she could find, through poison and induced abortions, often killing their mothers as well. Chenghua was so debauched it seems he couldn’t keep track of his own children, yet there was one baby that both he and Lady Wan missed—and that was Hongzhi.

Hongzhi’s mother, another consort named Lady Ji, had put her baby in the trust of a eunuch, who, with the help of Chenghua’s empress, managed to keep him safe for five years. The emperor, thanks to Lady Wan, was still childless at that point, and seriously bummed out about it. Imagine his great relief when one of his court eunuchs informed him that he did indeed have a son! Once Chenghua named Hongzhi his heir, even the vicious Lady Wan couldn’t get away with his murder. Nonetheless, she managed to kill Hongzhi’s mother as a consolation prize.

“So in other words, as Hongzhi was growing up, his experience of polygamy was that it was murderous—incredibly dangerous for everyone involved,” says Schneewind. “He wanted his babies to live and his wife to live, and he didn’t want to be worrying about whether they were going to kill each other. So, he figured, let’s just stick to one woman.”

His father, Emperor Chenghua, was hardly a better influence. In fact, he was a real Ming Dynasty Hugh Hefner; he pored through sex manuals and was obsessed with pornography, cavorted with Taoist magicians, and was led astray by money-grubbing pals. As a result, government affairs ended up mostly in the hands of Lady Wan, who, surprise surprise, thoroughly abused her power. Isolated in the palace away from society, imperial politics often grew nepotistic and petty, with consorts and eunuchs wielding disproportional influence.

So when Hongzhi took the throne, he was eager to clean up the rampant corruption and promote Confucian morality. Leading an upstanding life and setting a good example, says Schneewind, was an important part of his anti-corruption, anti-decadence campaign. It may also have made him into what Swope describes as the “most uninteresting and colorless of all the Ming emperors.” Alas, tradeoffs.

There is another factor that is often overlooked: within Confucianism, fidelity is valued. Chinese men of the time were praised for refusing to abandon previous fiancées, even if they had surpassed the woman in status or she had become disabled. Schneewind says that these values, which were well known by Hongzhi, must surely have been on his mind. Plus, in both Taoism and the medical advice of the time, too much sex was believed to deplete a male’s energy, or ch’i. 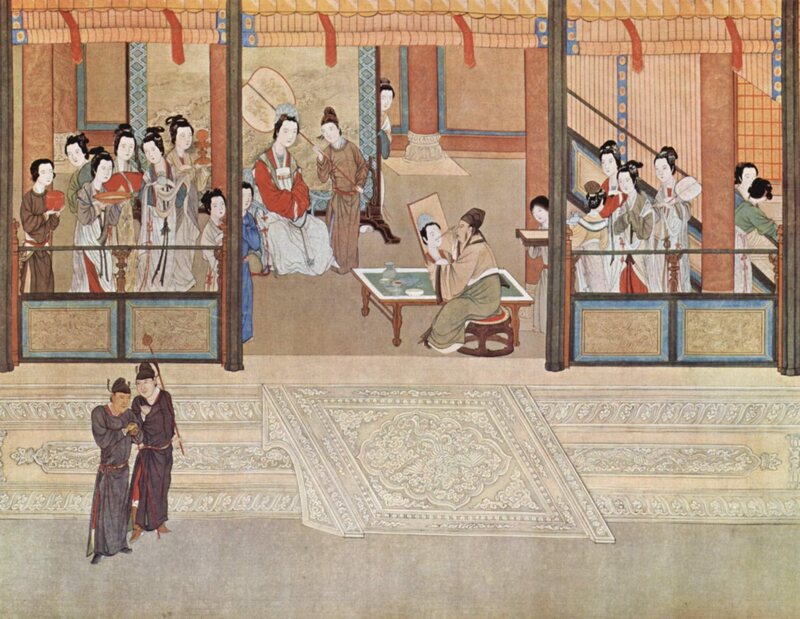 Hongzhi’s reign may have been the worst period of consort unemployment. (Photo: Qiu Ying/Public Domain)

And practically speaking, if the purpose of consorts was to provide offspring, then Hongzhi didn’t need any. He was endowed with two sons and three daughters by his single empress—or, as they say, “an heir and a spare.” He died in 1505 at age 35, blissfully ignorant of how his son, the Zhengde Emperor, would soon surround himself with women, die childless, and leave the government in shambles.

A debauched father, a eunuch guardian, a mother murdered by a ruthless consort, a dysfunctional government, the medical peril of too much sex, and a perfectly fertile, perfectly agreeable empress? When you look at the big picture, it seems quite rational for Hongzhi to have foregone a life of secondary wives and purposefully chosen monogamy.