Chinese Women
Home Legendary Nüwa
Discover the Life Secret! -Proven to break open an ocean of abundance, heavenly wealth and divine wisdom. And all you need is this 4-sentence prayer!

Nüwa was a serpent deity from ancient Chinese mythology. Sometimes she is pictured as a gorgeous woman, other times she is shown possessing a woman’s head but the body of a powerful snake. Nüwa was the creator of humankind and remained a powerful benefactor to people and all living creatures (many of which were also her handiwork).

When the world was new, Nüwa walked through empty plains and valleys.  Perceiving that creation was very desolate and lonely she began to craft living creatures in order to fill the waste.  On the first day she made chickens and sent them clucking through creation.  On the second day she fashioned dogs to run through the forest. On the third day she created sheep to graze the plains. On the fourth day she crafted pigs to root through the earth.  On the fifth day she made gentle cows and truculent bulls. On the sixth day she was inspired and crafted horses.  On the seventh day she was walking near a river and she saw her beautiful reflection.  She knelt down in the yellow clay and began to hand sculpt figures similar to herself.  As she set the lovely little forms down, they came to life and began to call out to her as mother.  All day Nüwa built more and more of the little people, after her long labors, her energy was waning.  To finish the job she picked up a strand of ivy and dipped in the fecund mud.  Then she flicked the mud across the lands.  Everywhere the little blobs fell, people sprung up, coarser and less lovely then the hand-made folk, but perfectly serviceable.  Thus did Nüwa create humankind, separating from the very beginning the rich and noble people from the commoners by means of her crafting methods.

Nüwa loved her creations and she continued to look after them quietly (for she was modest and disliked effusive worship).  She took Fuxi, the first of the three sovereigns of ancient China as her spouse.  Fuxi was a hero in his own right and is said to have invented fishing and trapping.  There are many ancient pictures and representations of the happy couple entwined as huge loving snake people.  However one day the great black water dragon Gong Gong put her marriage and all of her work in peril.  The story of what happened subsequently is of great interest (and bears directly on my favorite work of Chinese literature) so I will tell it completely tomorrow.

Nüwa or Nügua is the mother goddess of Chinese mythology, the sister and wife of Fuxi, the emperor-god. She is credited with creating mankind and repairing the Pillar of Heaven. Her reverential name is Wahuang(Chinese: 媧皇; literally: “Empress Wa”).

The Huainanzi relates Nüwa to the time when Heaven and Earth were in disruption:

The catastrophes were supposedly caused by the battle between the deities Gonggong and Zhuanxu (an event that was mentioned earlier in the Huainanzi),[b] the five-colored stones symbolize the five Chinese elements(wood, fire, earth, metal, and water), the black dragon was the essence of water and thus cause of the floods, Ji Province serves metonymically for the central regions (the Sinitic world).[6] Following this, the Huainanzi tells about how the sage-rulers Nüwa and Fuxi set order over the realm by following the Way (道) and its potency (德). 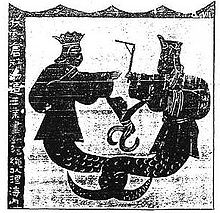 In Liezi (c. 475 – 221 BC), Chapter 5 “Questions of Tang” (Chinese: 卷第五 湯問篇), author Lie Yukou describes Nüwa repairing the original imperfect heaven using five-colored stones, and cutting the legs off a tortoise to use as struts to hold up the sky.

In Songs of Chu (c. 340 – 278 BC), Chapter 3 “Asking Heaven” (Chinese: 问天), author Qu Yuan writes that Nüwa molded figures from the yellow earth, giving them life and the ability to bear children. After demons fought and broke the pillars of the heavens, Nüwa worked unceasingly to repair the damage, melting down the five-coloured stones to mend the heavens.

In Shuowen Jiezi (c. 58 – 147 AD), China’s earliest dictionary, under the entry for Nüwa author Xu Shen describes her as being both the sister and the wife of Fuxi. Nüwa and Fuxi were pictured as having snake-like tails interlocked in an Eastern Han Dynasty mural in the Wuliang Temple in Jiaxiang county, Shandong province.

In Siku Quanshu, Sima Zhen (679–732) provides commentary on the prologue chapter to Sima Qian’s Shiji, “Supplemental to the Historic Record: History of the Three August Ones,” wherein it is found that the Three August Ones are Nüwa, Fuxi, and Shennong; Fuxi and Nüwa have the same last name, Feng (Chinese: 風; Hmong: Faj).

In the collection Four Great Books of Song (c. 960 – 1279 AD), compiled by Li Fang and others, Volume 78 of the book Imperial Readings of the Taiping Era contains a chapter “Customs by Yingshao of the Han Dynasty” in which it is stated that there were no men when the sky and the earth were separated. Thus Nüwa used yellow clay to make people. But the clay was not strong enough so she put ropes into the clay to make the bodies erect. It is also said that she prayed to gods to let her be the goddess of marital affairs. Variations of this story exist.

Nüwa is featured within the famed Ming dynasty novel Fengshen Bang. As featured within this novel, Nüwa is very highly respected since the time of the Xia Dynasty for being the daughter of the Jade Emperor; Nüwa is also regularly called the “Snake Goddess”. After the Shang Dynasty had been created, Nüwa created the five-colored stones to protect the dynasty with occasional seasonal rains and other enhancing qualities. Thus in time, Shang Rong asked King Zhou of Shang to pay her a visit as a sign of deep respect. After Zhou was completely overcome with lust at the very sight of the beautiful ancient goddess Nüwa (who had been sitting behind a light curtain), he would write a small poem on a neighboring wall and take his leave. When Nüwa later returned to her temple after visiting the Yellow Emperor, Nüwa would see the foulness of Zhou’s words. In her anger, she swore that the Shang Dynasty would end in payment for his foulness. In her rage, Nüwa would personally ascend to the palace in an attempt to kill the king, but was suddenly struck back by two large beams of red light.

After Nüwa realized that King Zhou was already destined to rule the kingdom for twenty-six more years, Nüwa would summon her three subordinates—the Thousand-Year Vixen (later becoming Daji), the Jade Pipa, and the Nine-Headed Pheasant. With these words, Nüwa would bring destined chaos to the Shang Dynasty, “The luck Cheng Tang won six hundred years ago is dimming. I speak to you of a new mandate of heaven which sets the destiny for all. You three are to enter King Zhou’s palace, where you are to bewitch him. Whatever you do, do not harm anyone else. If you do my bidding, and do it well, you will be permitted to reincarnate as human beings.” Thus, with these words, Nüwa would never be heard of again, but would still be a major indirect factor towards the Shang Dynasty’s fall.

Leizu: a legendary empress and wife of the Yellow Emperor