Here’s a statistic Chinese law enforcement would rather you didn’t know: Between 2000 and 2015, and in particular since 2006, the number of Chinese men aged 18 to 61 who have solicited the services of a prostitute generally rose. Current estimates suggest that by the year 2020, approximately 17 percent of all Chinese men in this age group will have solicited a prostitute at some point in their lives.

Selling sex and soliciting prostitutes are illegal in China. According to the country’s Public Security Administration Punishments Law, those who sell or solicit sex may face up to 15 days’ detention and a fine of up to 5,000 yuan ($750). Then there is the occasional well-publicized crackdown by police, though this has evidently not made much of a dent in what has become a booming industry.

The figures above come from my own research: My team and I have been studying sex work in China for about 20 years. Strangely, while the number of prostitution-related legal cases handled by China’s public security organs rose briefly at the turn of the century, it has declined relatively steadily ever since. This has come in spite of repeated attempts to “clean up” the industry, a commitment that would assume a greater number of cases being dealt with by the police. 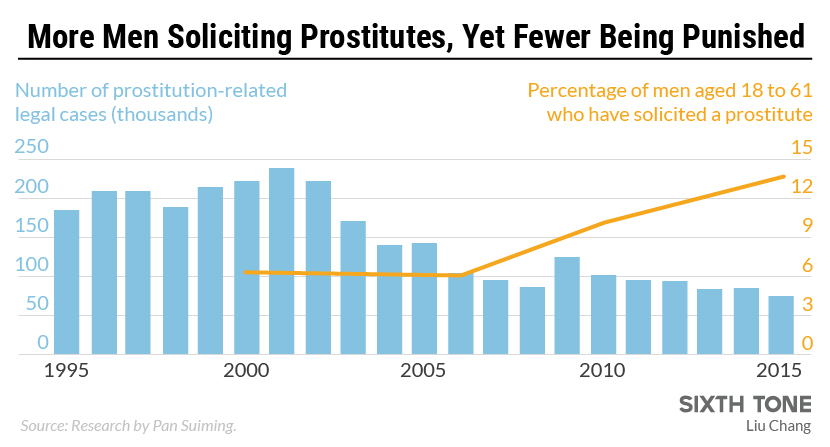 Why are more people reporting experiences with prostitution but fewer of them being punished for it? After all, China’s anti-prostitution campaigns have continued unabated. In 2010, China launched what has been termed the “most severe anti-pornography storm in history,” a broadly defined initiative that encompassed everything from purging pornographic content from the internet to ridding the streets of sex workers. Many assume this campaign has led to an unprecedented spike in arrests of prostitutes and their clients. But this is a misconception: The number of recorded cases involving prostitution during this time actually decreased.

The root cause of this issue is unrelated to politics, morals, or sex. Prior to 2001, due to budget shortfalls, China’s law enforcement departments took a cut of the fines they issued and used the money to fund their operations. The initiative proved to be an effective incentive for vigorous policing, and ensured an aggressive posture against illegal activities, including prostitution.

Later, national policy shifted toward the separation of revenues and expenditures. Law enforcement departments then had to hand over all the revenue from fines to the state, and their funding levels were no longer linked to the money they accrued through fines.

Ending the arrest of prostitutes, or even just reducing the number of arrests, constitutes progress.
– Pan Suiming, professor

Obviously, this meant that police took a laxer approach to prostitution. Soon, prostitution-related arrests ceased to be the result of a consistent effort to halt the practice, and were instead limited to a few mandated crackdowns per year. The end result has been a decline in the number of prostitutes being arrested, even as the number of men soliciting prostitutes has climbed.

This is the reality of China’s situation. The data asks profound questions about concepts such as legalization, decriminalization, legal red-light districts, and punishing clients instead of sex workers themselves.

In reality, all of the above proposals are out of step with the current reality in China. Since seizing power in 1949, the Chinese Communist Party has endeavored to cast prostitution as an oppressive vestige of the “old China.” On a fundamental level, the belief that sex workers represent the dregs of pre-1949 society has caused them to be seen not only as moral criminals, but also as political enemies. There is therefore little chance that the state will approve any policy that accepts and regulates the sex industry in the near future.

The vast majority of Chinese sex workers whom I’ve spoken to since 1998 harbor no illusions that their industry will be legalized; rather, what they hope for most is an end to the crackdowns. As best I can tell, due to the fact that these crackdowns are ordered from on high, police officers who might otherwise be sympathetic to the plight of prostitutes have no choice but to arrest them. At the same time, criminal organizations frequently take advantage of the threat of crackdowns to extort prostitutes.

The legality of prostitution in China is not open to debate, and this necessarily limits what we can achieve regarding the treatment of sex workers. In this context, whether we choose to arrest prostitutes is more important than the legal questions surrounding the sex trade. Ending the arrest of prostitutes, or even just reducing the number of arrests, constitutes progress.

This is the basis of a proposal I have been trying to make for many years: “hollowing out” the prostitution ban. It’s an extremely simple idea, and it would not require any changes to law or policy — only the adoption of a more lenient attitude toward sex workers. All we need to do is reduce the amount of resources devoted to rooting them out.

We can turn anti-prostitution work into an “official stance” rather than a concrete policy that endangers sex workers simply by raising the legal burden of proof — for example, by ending the practice of condoms being used as evidence of prostitution, a rule that makes many sex workers so fearful of being caught that, should they believe a police raid is imminent, they swallow used condoms after sex — something that obviously carries a raft of health risks.

In a sense, the hollowing-out has already begun. Over the past 15 years, the number of people involved in prostitution-related cases nationwide has fallen each year to about one in every 20,000, and only about 1 percent of the nation’s prostitutes are being swept up in the crackdowns.

We should publicize and praise the stories of police officers who show sympathy to prostitutes. If we can ensure that less than one out of every 1,000 sex workers is arrested over the next few years, then the risk of arrest will be roughly equivalent to the normal occupational hazards found in other professions. At present, this is the most realistic positive outcome we can hope for.

What this ancient calendar will reveal about your destiny will surprise you! Discover your Mayan Day Sign and the clues it has to your future.

What are the pros and cons of dating a Chinese girl?