After months of back-and-forth negotiations, Washington moved rapidly this past week to fend off the increasing transcendence of China’s tech industry, with Congress passing expanded national security controls over M&A transactions and the Trump administration heaping more pressure on China with threats of increased tariffs.

We’ve been following the reforms to CFIUS — the Committee on Foreign Investment in the United States — since the proposal was first floated late last year. The committee is charged with protecting America’s economic interests by preventing takeovers of companies by foreign entities where the transaction could have deleterious national security consequences. The committee and its antecedents have slowly gained powers over the past few decades since the Korean War, but this week, it suddenly gained a whole lot more.

Through the Foreign Investment Risk Review Modernization Act of 2018, which was rolled into the must-pass National Defense Authorization Act and passed by Congress this week, CFIUS is gaining a number of new powers, more resources and staff, more oversight, and a charge to massively expand its influence in any M&A process involving foreign entities.

Lawfare has a great summary of the final text of the bill and its ramifications, but I want to highlight a few of the changes that I think are going to have an outsized effect on Silicon Valley and the tech industry more widely.

One of the top priorities of this legislation was to make it more difficult for Chinese venture capital firms to invest in American startups and pilfer intellectual property or acquire confidential user data.

Congress fulfilled that goal in two ways. First, the definition of a “covered transaction” has been massively expanded, with a focus on “critical technology” industries. In the past, there was an expectation that a foreign entity had to essentially buy out a company in order to trigger a CFIUS review. That jurisdiction has now been expanded to include such actions as adding a member to a company’s board of directors, even in cases where an investment is essentially passive.

That means that the typical VC round could now trigger a review in Washington — and in the fast timelines of startup fundraising, that might be enough friction to keep Chinese venture capital out of the American ecosystem. Given that Chinese venture capital (at least by some measures) has outpaced U.S. venture capital in the first half of this year, this provision will have huge ramifications for startups and their valuations.

The second element Congress added was requiring that CFIUS receive all partnership agreements that a company has signed with a foreign investor. Often in a transaction, there is a main agreement spelling out the overall structure of a deal, and then side agreements with individual investors with special terms not shared with the wider syndicate, such as the right to access internal company data or intellectual property. By requiring further disclosure, CFIUS will have a more holistic picture of a deal and any risks it might add for national security.

It’s important to note that Congress was keen on balancing the need for investment with the need of national security. Through oversight provisions, including allowing CFIUS decisions to be contested in the DC Court of Appeals, Congress has designed the reform to be fairer, even as it takes a harder line on certain transactions.

It will take many months for the provisions to come in full force, so some of the effects of this bill won’t be felt until the end of next year. Nonetheless, Congress has sent a clear message of its intent.

Congress’ national security concerns in financial transactions are also crossing the Atlantic. British Prime Minister Theresa May  and her government are spearheading new controls over foreign investment transactions, and the EU has also launched more screenings to ensure that transactions are in the best interests of the continent. All of these legislative moves are a response to Chinese foreign direct investment, which has skyrocketed in Europe while almost disappearing in North America. 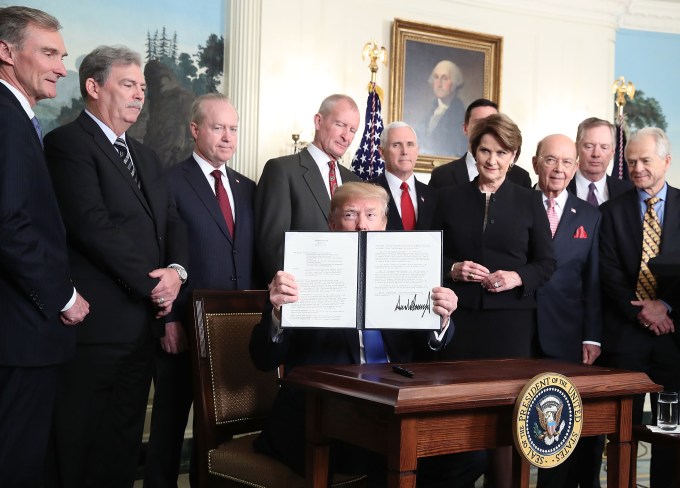 President Trump signed tariffs on China earlier this year. Now, the administration wants to more than double them.

That disappearance is a function of the on-going trade dispute between the U.S. and China, which crescendoed this past week. The Trump administration said it is considering increasing tariffs from 10% to 25% on $200 billion worth of Chinese goods, significantly heightening the tariffs it had put in place earlier this year.

That threat got a swift response from China overnight, with the Chinese Commerce Ministry saying that it would put tariffs on $60 billion worth of American goods in retaliation if the U.S. followed through with its threat.

So far, the tech industry appears to have been more insulated from the back-and-forth than expected, although the increasing scope and intensity of tariffs could change that calculus. Apple updated its quarterly filing this week to include a new risk around trade disputes, saying that “Tariffs could also make the Company’s products more expensive for customers, which could make the Company’s products less competitive and reduce consumer demand.” Legal boilerplate for sure, but it is the first time the company has included such a provision in its filing.

The tariffs drama is going to continue in the weeks and months ahead. But this week in particularly was a watershed for U.S. and China technology relations, and a busy week for tech lobbyists and policy officials.

For startups, most of this news basically boils down to the following: the U.S. is one market, and China is another. Cross-investing and cross-distribution just aren’t going to be easy as they were even a few months ago. Pick a market — one market — and focus your energies there. Clearly, it’s going to be tough times for anyone caught in the middle between the two.

Military editor - 06/01/2021
0
COVID-19 has taught the world that the Chinese Communist Party’s lies can have vast and terrible consequences. As the United States, our allies and...

Military editor - 22/03/2019
0
For the second time in a week, the Pentagon’s top uniformed officer has taken a shot at Google, warning that the tech company’s investments in...

The world’s largest amphibious plane has had a successful test flight in China following...

Lifestyle editor - 13/10/2018
1
Chinese media Caixin founder Ms Hu Shuli is seen in the west as one of China’s most respected journalists. She was called China’s most...

Beijing editor - 21/05/2019
0
China’s housing regulator has urged four more cities to prevent their residential property markets from overheating in the latest sign that authorities are not...

China to allow some drugs based on foreign approvals

Society editor - 09/10/2017
0
China will allow use of some drugs and medical devices based on approval by foreign regulators, the government said Monday, in a move that...

Business editor - 24/07/2017
0
At the National People's Congress meeting in early March, the Chinese Government set its annual growth target at 6.5 per cent, a couple of...

Man is doing, God is watching

Religion editor - 12/09/2018
0
Even though we used all the world’s pens and paper and ink, it would be impossible to record the crimes of the Communist Party...

Japan must tell its public of PRC’s threat: US military

Military editor - 21/10/2019
0
Japan should rethink its rejection of offensive weapons, a senior US military officer said yesterday in Tokyo, while the US Coast Guard chief warned...

The arrogance of Chinese diplomacy in the international arena

Guo Wengui editor - 09/09/2018
0
In recent weeks, with the trade war escalation, the Chinese leadership is much worried that the excessively positive propaganda about China’s rise to become...

North Korea is attracting thousands of vacationers every year. So who are they?

World editor - 26/07/2017
0
When a brutal, communist dictatorship is able to attract tourists, the most obvious question is: Who? North Korea was isolated further Friday as the United...

Religion editor - 27/02/2019
0
Pope Francis has called on Chinese bishops to show respect and loyalty to the ruling Chinese Communist Party as faithful “members of the Chinese...

Guo Wengui editor - 24/07/2017
0
The arrival of hot weather in Beijing spells the start of a sacred summer ritual — the retreat to a beach resort where, this...

Pollution editor - 20/02/2017
0
China's environment ministry has named and shamed several cities in the north of the country for not doing enough to cope with smog, state...