At the Xinjiang International Grand Bazaar in the heart of Urumqi, everything is bought and sold from tiny stalls blasting local music, in a square filled with Islamic architecture. It’s a place that feels more like Central Asia than China.

That’s might be because this western Chinese city, the capital of China’s Xinjiang Uighur Autonomous Region, is closer to Kabul than Beijing. And recently it received something else in common with Kabul: A hefty security presence.

“It makes me feel safer,” says one shoe vendor. “They’ve built police stations every few blocks or so. The police check us every day, no matter if you’re a doctor, teacher, anyone. It’s all for our safety.”

Increasingly draconian security measures make this vendor unusually cheerful — perhaps because a camera above her stall is capturing her conversation with a foreign journalist. I mention this to the woman, whose aquiline nose and large, deep-set eyes look more Middle Eastern than Chinese.

She dismisses this line of thinking. She says she and other Uighurs — members of a Muslim ethnic minority who make up more than 40 percent of Xinjiang’s population — are treated well by China’s leaders.

That’s not what protesters at this very place thought eight years ago. Nearly 200 people were killed and more than 1,000 injured in riots in July 2009. Uighurs, angry about discrimination from China’s ethnic Han majority and the government, took to the streets. The government responded by calling in the military, detaining thousands and shutting down the Internet. 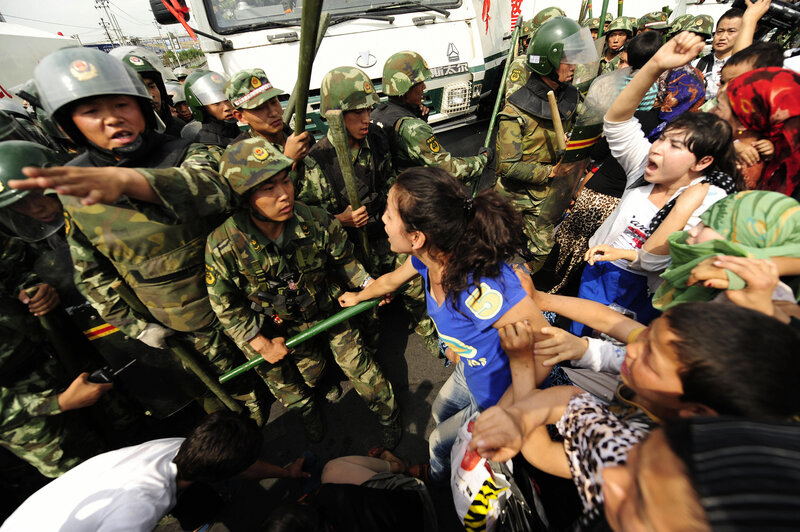 Ethnic Uighur women yell at Chinese riot police during a protest in Urumqi in China’s far west Xinjiang region on July 7, 2009. Nearly 200 people were killed and more than 1,000 injured in riots throughout July 2009. Peter Parks/AFP/Getty Images

In the years that followed, Uighur terrorists killed dozens of Han Chinese in brutal, coordinated attacks at train stations and government offices. A few Uighurs have joined ISIS, and Chinese authorities are worried about more attacks on Chinese soil.

Last year President Xi Jinping appointed a party secretary of Xinjiang, who is transforming this region — bordered to the west by Pakistan, Afghanistan and other Central Asian countries — into one of the world’s most tightly controlled police states. Earlier this year Chen Quanguo — whose name literally means “entire country” — addressed police in an impressive show of force: Ten thousand officers, all dressed in black riot gear, lined up in neat columns.

“The sword is drawn, and we’re about to hear the thunder,” said Chen to his officers. “Comrades: are you ready?”

“We are ready!” they roared in response.

Chen arrived in Xinjiang in 2016 fresh from Tibet, where his five-year crackdown on dissent had disturbed human rights organizations but earned him accolades from China’s president. He went on a police-hiring spree there, and promised to do the same in Xinjiang.

“Obviously, in order to replicate the same density of policing and surveillance, you need to hire tens of thousands of police forces. And that’s exactly what Chen Quanguo did,” says Adrian Zenz, a researcher at the European School of Culture and Theology.

Zenz says Xinjiang has posted ads for nearly 100,000 security personnel positions in the past 12 months — 30 times more officers than were hired annually a decade ago.

“This is Xinjiang’s new industry No. 1. It is becoming the most important source of employment,” says Zenz.

Drawing on central government subsidies, Xinjiang spent around $6 billion — nearly four times the region’s own income — on security in the first half of 2017, he says.

This massive investment on security measures can be felt along the streets of Urumqi, a city of 4 million people. Every few blocks there’s a police station, where officers routinely demand identification from passersby. City shops are forced to employ and pay security guards who wear red armbands and are armed with batons.

Gas stations are fenced off with razor wire, and guards demand drivers’ IDs to enter. Cameras lining the streets “capture every square inch” of the city, one resident boasts. Thousands of the region’s newest security jobs, says Zenz, are for video and Internet surveillance staff. 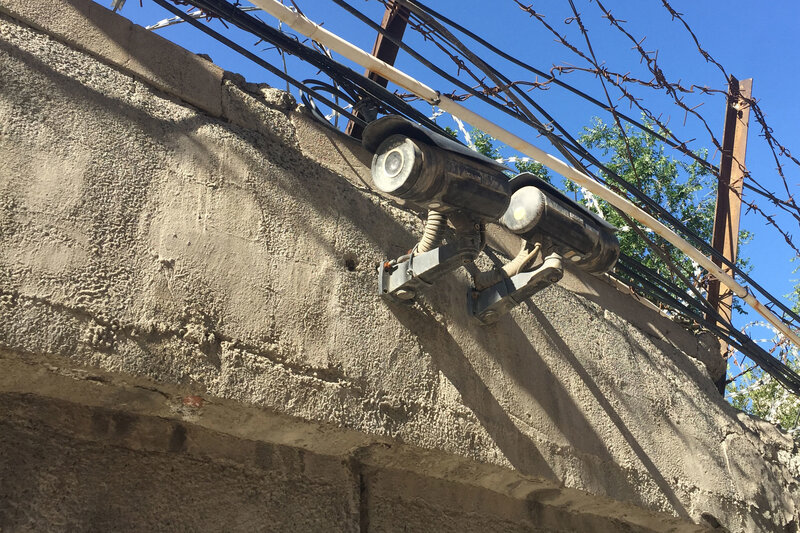 Security cameras line the alleys of Urumqi. Every few blocks, there’s a police station, where officers routinely demand identification from passersby. City shops are forced to employ and pay security guards who wear red armbands and are armed with batons. Rob Schmitz/NPR

The new police state comes with an eerie soundtrack. Along the streets, you hear the same pair of Mandarin-language propaganda songs: a jolly children’s song about obeying traffic laws, and a more somber acoustic tune that promotes core Communist values. The government forces shops and restaurants in Uighur neighborhoods to broadcast these two songs all day on a loop all.

A middle-aged man who trades auto parts tells me all this new security has killed the local economy. Like many Uighur men, he travels frequently to Central Asian countries on business — and like every Uighur I spoke to, he doesn’t want to use his name for fear of getting in trouble with police.

“It’s nearly impossible for me to run my business now,” the man complains. “I can no longer travel abroad because police have seized all of our passports. You have to ask permission to travel now, and once you return from a trip, they find you and ask what you did there, who you saw. It’s troublesome. Before we could come and go as we pleased.”

The businessman says all this security has had a personal impact, too.

“We can’t even visit our relatives anymore,” he says. “If we try, the local police will come to check on us to see what we’re doing there.”

In other parts of Xinjiang, the government has set up political re-education centers, where Uighurs who have managed to travel abroad are detained upon reentry — sometimes for months — and forced to watch propaganda videos and take classes in Mandarin language and Chinese identity before being released.

At a nearby coffee shop, a young Uighur woman says police now stop residents on the street and force them to hand over their phones. Then they plug them into a computer and force residents to download a government app.

“The app automatically checks to see if other apps on your phone are safe,” she says, meaning permitted by the government. “If not, it’ll ask you to delete them. It’ll also detect videos about terrorism and things like that. Some apps, like the camera apps that girls like that make you prettier, aren’t allowed.”

As she speaks, the café manager interrupts, quietly speaking to the woman in Uighur. She nods her head and adds, “don’t get me wrong — this is all for our own safety.” 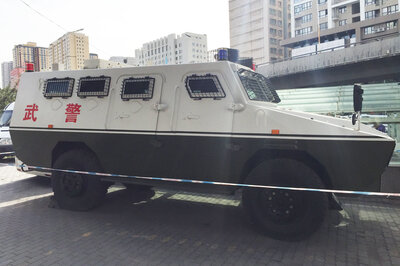 A military police vehicle on a sidewalk in central Urumqi. Rob Schmitz/NPR

Outside Urumqi’s city center is a ring of suburbs where most of the city’s Han residents live. He Jin, 36, says after the riots of 2009 she was scared of venturing into the city’s Uighur enclave.

“Without these new security measures, each time I see a face that doesn’t look like mine, I might wonder if they’re terrorists from outside the country or if they’re going to throw a bomb or something,” says He. “Now with a police station every few hundred feet, I feel safe.”

But Xiang Xin Xin, 27, has a different take. He’s Han, he’s young, and he says a rising police state is a drag to live in.

“Everywhere you go, they check your ID,” he complains. “Restaurants and shops waste money on hiring security guards. There’s nowhere fun to go out at night because everything closes early.”

Xiang says he went to college in Shanghai, nearly 2,000 miles away, where he admired the skyscrapers and walked along leafy lanes with no security personnel demanding to see your ID.

He says he felt free.

World editor - 25/04/2017
0
Chinese President Xi Jinping urged US. President Donald Trump to exercise restraint over North Korea and said he opposed any action that would violate...

chinese communist party editor - 13/08/2019
4
Tens of thousands of people, especially overseas Chinese, have appealed to the U.S. government to officially designate the Chinese Communist Party (CCP) as a...

Jetstar muscles in on flights to China

Business editor - 23/06/2017
0
Jetstar says it will be flying non-stop between Australia and China under a new charter arrangement before the end of the year, as it positions itself to...

Business editor - 13/08/2017
0
Chinese textile firms are increasingly using North Korean factories to take advantage of cheaper labor across the border, traders and businesses in the border...

Kyle Bass sits down with General Robert Spalding in a dialogue about Bloomberg’s deal...

News editor - 16/10/2019
0
General Spalding: What we know about the Chinese people and the Chinese Communist Party, well, who was supposed to warn us about this? We...

Business editor - 14/11/2017
0
One of Western Australia's most recognised household dairy names — the 130-year-old Brownes Dairy — has been sold to a Chinese firm. Brownes chief executive...

taiwan editor - 03/11/2021
0
Taiwan is "very high on the agenda" in the European Union, the grouping's first official parliamentary delegation to the democratic island said on Wednesday,...

Guo Wengui editor - 07/05/2019
0
Dear friends, this time, there are three core reasons why President Trump made his decision to raise tariffs. The Belt and Road Forum in...

Society editor - 16/08/2018
0
China's Communist Party has sacked a senior regional official over a vaccine scandal that inflamed public fears over the safety of domestically produced drugs,...

The Fourth Plenary Session of the 19th CCP Central Committee will be held from...

chinese communist party editor - 24/10/2019
0
The fourth plenary session of the 19th Central Committee of the Chinese Communist Party (CCP) will be held from October 28 to 31 in...

Trump said he has no plan for a meeting with President Xi before the...

World editor - 07/02/2019
0
US President Donald Trump on Thursday said he would not be meeting with Chinese President Xi Jinping before the March 2 deadline to reach a...

World editor - 13/12/2017
0
South Korean President Moon Jae-in has arrived in China with 200 business people, a sign of thaw in frosty relations with its major trading partner. As tensions...

Society editor - 15/02/2019
0
On Christmas eve, a group of construction workers stood on the edge of the roof of their former employer's building in Times Square in...

hong kong editor - 04/12/2020
0
The United States is appalled by the Hong Kong government’s political persecution of Hong Kong’s courageous pro-democracy advocates. The use of courts to silence...