President Donald Trump has made clear that the U.S. now considers China more a strategic adversary than a partner. While this shift in Washington’s view of Beijing showed up first in trade policy, a new front has begun to open in the capital markets.

Senator Marco Rubio fired the first major salvo last month by introducing legislation that would increase oversight of Chinese companies listed on American stock exchanges, delisting those that fail to comply with the new requirements. Days later, he queried U.S. index compiler MSCI about its addition of domestic Chinese stocks to its global indexes, saying it risked exposing American investors to corporate fraud.

Rubio’s bill seems poised to gain momentum. If indeed passed, it would represent a new front in the U.S. economic war with China and could have a dramatic impact on global investment flows. Such a law would weigh heavily on China-related stocks around the globe and could even have domestic political repercussions for President Xi Jinping.

Chinese companies have been tapping the U.S. capital markets since the early 1990s. A listing in New York has long been seen as confirmation that a company is indeed one of China’s best and brightest.

Yet an American listing did not necessarily assure good corporate governance. U.S. regulators have never been able to examine audit documents from Chinese companies as Beijing considers that practice a breach of its sovereignty and a risk to its state secrets.

The escalation from import tariffs to capital markets means that the U.S. and China are now engaged in the early stages of an economic war. It is only recently that the U.S. administration has recognized that America’s advantages in taking on China lie in its control over the global reserve currency and the world’s greatest capital market. The U.S. has many alternatives to China but China does not enjoy the same luxury of choice.

While many Chinese companies might seek to shift their primary listing to Hong Kong if Rubio’s bill were passed, success is not a given. Hong Kong would no doubt welcome a surge of such initial public offerings, but the world is a global marketplace and investors would still ask why the companies were unable to provide better disclosure in the U.S.

Other politicians would go further than Rubio. Some voices are demanding that Trump restrict U.S. pension funds and other such asset managers from investing in Chinese companies or at least blacklist state-owned ones.

The U.S. has the power and capacity to do this via the Department of the Treasury and the Office of Foreign Assets Control. Washington has already used this power to force U.S. money managers to divest from Rusal, the Hong Kong-listed Russian aluminum producer which at the time was controlled by an oligarch close to President Vladimir Putin. U.S. data provider Bloomberg would not even publish Rusal’s share price for months for fear for breaching sanctions.

If the U.S. blacklisted Chinese companies this way, billions of dollars of stocks would have to be dumped. U.S. investment company BlackRock alone holds around $3.3 billion of investor money in Hong Kong-listed exchange traded funds tied to domestic Chinese shares besides its China-focused mutual funds.

Indeed, regardless of where they are listed, affected Chinese companies would no longer be able to count on U.S.-based funds as investors. That would be an incredible blow to China Inc., and one that China would have little in its arsenal with which to react.

Beijing could not effectively reciprocate in kind because of the comparatively tiny sums of Chinese money invested in overseas stocks due to its capital controls. Even if China responded by dumping U.S. Treasurys and other bonds, it would be kicking itself in the teeth as there would be nowhere else to put their money and the U.S. bond market is liquid enough to absorb even aggressive selling.

The Chinese leadership could also face internal pressure in the case of such dramatic capital market conflict.

By listing their companies overseas, China’s business elites, and by extension their political associates, have effectively put billions of dollars of assets beyond the country’s capital controls. This has undoubtedly provided vast opportunities for payoffs and favors, free from local oversight and surveillance. 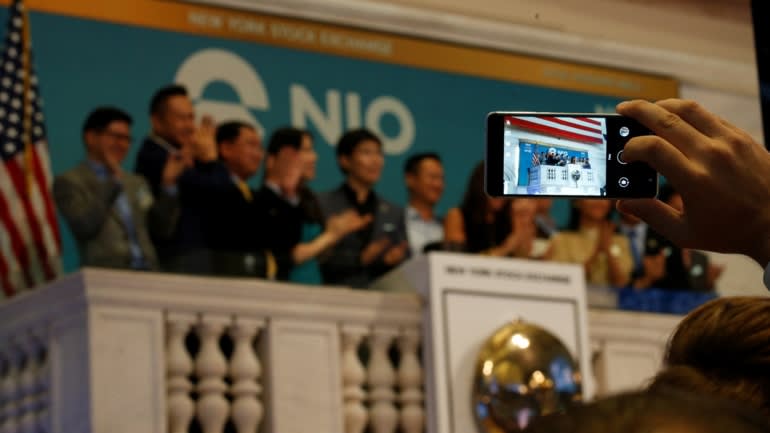 By listing their companies overseas, China’s business elites have effectively put billions of dollars of assets beyond the country’s capital controls.   © Reuters

If the most extreme sanctions were to gain traction, those who gained most from China’s economic rise would suddenly find their assets effectively frozen offshore or remitted back onshore. It surely would play badly for President Xi Jinping if the Chinese elites were thus left substantially poorer and very much shackled within the nation’s financial system.

The links between billions of dollars in offshore assets, self-made tycoons, bosses of state-owned enterprises and the nation’s political leaders are deliberately opaque. But it would be naive to think that a hard blow to the pocketbooks of China’s elites would not echo around the courtyards of the Zhongnanhai leadership compound in Beijing. Xi might then find himself forced to compromise far quicker than he would like and by those he needs to keep closest at hand.

The issue of inadequate disclosure by Chinese companies listed in the U.S. has been left unaddressed for too long. Now higher requirements will likely be enshrined in law.

Raising the stakes with restrictions on U.S. investments in listed companies in Hong Kong and China would truly be a nuclear option that the current situation does not require. Yet no investor can afford to overlook this possibility as we are in the early stages of a global realignment with China.

Rubio’s initiative marks the most dramatic escalation since Trump launched his trade offensive. But actions to contest the policies of the Chinese Communist leadership are multiplying across the spectrum, from human rights abuses to technology acquisition through cyber theft and the forced transfer of intellectual property.

If Chinese leaders are worried by the threat to limit their nation’s access to the world’s largest capital market, they should ask themselves what the effect would be if their banks were denied access to the U.S. dollar clearing market too. Inconceivable? Not if the shedding of the blood of the mostly peaceful demonstrators in the streets of Hong Kong remains a possibility.

By Fraser Howie,co-author of “Red Capitalism: The Fragile Financial Foundation of China’s Extraordinary Rise.” He has worked in China’s capital markets since 1992. Roger Garside, a former British diplomat, is the author of “Coming Alive: China After Mao.”
Nikkei Asian Review