Juan Guaidó, the opposition politician leading the push to topple Nicolás Maduro, has urged one of the Venezuelan president’s key international backers, China, to abandon him.

His remark comes after Beijing said it hoped to continue working with Caracas “no matter how the situation evolves”, suggesting China was now preparing for a future without Maduro.

In an interview with the South China Morning Post, Guaidó said China, which under Maduro and his predecessor Hugo Chávez became Venezuela’s biggest foreign creditor, had “extraordinary potential” to help rebuild his economically stricken nation.

“Maduro is increasingly isolated and is largely acting alone,” Guaidó said, calling China “a fundamental global player with whom we would like to relaunch our relationship”.

He added that Beijing had seen up close Maduro’s “plundering of our state resources”. Last month Guaidó declared himself Venezuela’s legitimate interim president, a move recognised by Washington and others.

His comments come after China’s foreign ministry, which officially continues to back Maduro, hinted its support for the president may not be everlasting.

“No matter how the situation evolves, China-Venezuela cooperation should not be undermined,” a spokesman, Geng Shuang, told reporters on Friday on the eve of the latest round of mass protests in Venezuela against Maduro.

China is estimated to have given Venezuela up to $62bn (£47bn) of loans since 2007 in an attempt to secure oil resources, construction contracts and a geopolitical foothold in a region the US has long considered its “backyard”. Experts believe that, to Beijing’s exasperation, almost half has yet to be repaid.

According to the Wall Street Journal, the Chinese ambassador to Venezuela, Li Baorong, congratulated Maduro on his new term at a function in a Caracas hotel last month and said China opposed “hegemonism and interventionism”.

“We insist on our policy of non-interference in other countries’ internal affairs,” he said.

But Margaret Myers, the director of the China and Latin America programme at the US-based thinktank Inter-American Dialogue, said Beijing had become increasing aware the situation in Venezuela was “unsustainable” and it was unlikely to mourn Maduro’s political passing, if it came.

“I don’t think there is any love lost over Maduro. They find the relationship to be a very challenging one,” she said, pointing to increased contact between Chinese officials and Venezuela’s opposition since Chávez’s 2013 death.

“My sense is that the Chinese government, although they would never say so, is hoping for a quick resolution to this and even for a new leadership that would be perhaps a better partner, even if it is an opposition one.”

Myers added: “The Chinese relationship with Venezuela is a very opportunistic and pragmatic one … They are not in any way tied to working with chavistas. They don’t have an ideological preference here. It is more a matter of maintaining stability and maintaining strong ties and working with whatever new government to ensure some form of payment for the loans they have distributed so far.” 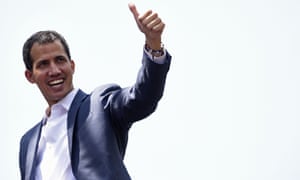 Guaidó told the Sunday Morning Post he also hoped to work with Beijing: “We are ready to begin a constructive relationship and dialogue with China as soon as possible.”

On Sunday, protesters who poured on to the country’s streets the previous day expressed optimism that their campaign to force out Maduro was advancing.

Sol Castro Sánchez, a retired university professor, said: “It is always very encouraging to know that … there are still people coming out and protesting their refusal to live under these conditions. The people are fed up. They are sick and tired of living like this.”

But there are also fears the political crisis could descend into conflict.

In an interview with CBS broadcast on Sunday, Trump repeated his assertion that a US military intervention was possible if Maduro refused to budge. “Certainly it’s something that’s on the – … it’s an option.”

Such threats have stirred fears over the potential for a proxy war in Venezuela, pitting China or Russia against the US.

“The Republic [of Venezuela] stands at the gates of a suicidal war … The situation is extreme. We are in the pre-war phase,” wrote the columnist Félix Cordero Peraza in El Universal newspaper.

Myers said she thought Beijing was unlikely to become embroiled in a confrontation with the Trump administration over the country.

“If there was interest in getting into a toss-up or conflict over Venezuela with the US, we would see far more aggressive actions or statements on the part of China. And we haven’t seen that thus far … I don’t think they are interested in ruffling US feathers,” she said.

By Tom Phillips
The Guardian

Remarks by President Trump In Farewell Address to the Nation