Businesses and government agencies in the United States have been targeted in aggressive attacks by Iranian and Chinese hackers who security experts believe have been energized by President Trump’s withdrawal from the Iran nuclear deal last year and his trade conflicts with China.

Recent Iranian attacks on American banks, businesses and government agencies have been more extensive than previously reported. Dozens of corporations and multiple United States agencies have been hit, according to seven people briefed on the episodes who were not authorized to discuss them publicly.

The attacks, attributed to Iran by analysts at the National Security Agency and the private security firm FireEye, prompted an emergency order by the Department of Homeland Security during the government shutdown last month.

The Iranian attacks coincide with a renewed Chinese offensive geared toward stealing trade and military secrets from American military contractors and technology companies, according to nine intelligence officials, private security researchers and lawyers familiar with the attacks who discussed them on the condition of anonymity because of confidentiality agreements.

A summary of an intelligence briefing read to The New York Times said that Boeing, General Electric Aviation and T-Mobile were among the recent targets of Chinese industrial-espionage efforts. The companies all declined to discuss the threats, and it is not clear if any of the hacks were successful. 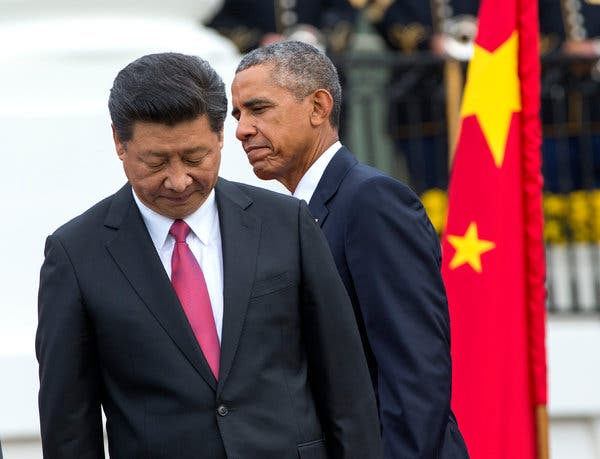 But the 2015 agreement appears to have been unofficially canceled amid the continuing trade tension between the United States and China, the intelligence officials and private security researchers said. Chinese hacks have returned to earlier levels, although they are now stealthier and more sophisticated.

“Cyber is one of the ways adversaries can attack us and retaliate in effective and nasty ways that are well below the threshold of an armed attack or laws of war,” said Joel Brenner, a former leader of United States counterintelligence under the director of national intelligence.

Federal agencies and private companies are back to where they were five years ago: battling increasingly sophisticated, government-affiliated hackers from China and Iran — in addition to fighting constant efforts out of Russia — who hope to steal trade and military secrets and sow mayhem. And it appears the hackers substantially improved their skills during the lull.

Russia is still considered America’s foremost hacking adversary. In addition to meddling widely and spreading disinformation during United States elections, Russian hackers are believed to have launched attacks on nuclear plants, the electrical grid and other targets.

Threats from China and Iran never stopped entirely, but Iranian hackers became much less active after the nuclear deal was signed in 2015. And for about 18 months, intelligence officials concluded, Beijing backed off its 10-year online effort to steal trade secrets.

But Chinese hackers have resumed carrying out commercially motivated attacks, security researchers and data-protection lawyers said. A priority for the hackers, researchers said, is supporting Beijing’s five-year economic plan, which is meant to make China a leader in artificial intelligence and other cutting-edge technologies.

“Some of the recent intelligence collection has been for military purposes or preparing for some future cyber conflict, but a lot of the recent theft is driven by the demands of the five-year plan and other technology strategies,” said Adam Segal, the director of the cyberspace program at the Council on Foreign Relations. “They always intended on coming back.”

Officials at the Chinese embassy in Washington did not respond to a request for comment.

Mr. Segal and other Chinese security experts said attacks that once would have been conducted by hackers in China’s People’s Liberation Army are now being run by China’s Ministry of State Security.

These hackers are better at covering their tracks. Rather than going at targets directly, they have used a side door of sorts by breaking into the networks of the targets’ suppliers. They have also avoided using malware commonly attributed to China, relying instead on encrypting traffic, erasing server logs and other obfuscation tactics.

“The fingerprint of Chinese operations today is much different,” said Priscilla Moriuchi, who once ran the National Security Agency’s East Asia and Pacific cyber threats division. Her duties there included determining whether Beijing was abiding by the 2015 agreement’s terms. “These groups care about attribution. They don’t want to get caught.”

It is difficult to quantify the number of industrial-espionage attacks, in part because they have been designed mostly to steal strategic trade secrets, not the kind of personal information about customers and employees that companies must disclose. Only Airbus has acknowledged in recent weeks that Chinese hackers had penetrated its databases.

Many of the attacks by the Chinese Ministry of State Security have been against strategic targets like internet service providers with access to hundreds of thousands, if not millions, of corporate and government networks.

Last week, Ms. Moriuchi, who is now a threat director at the cybersecurity firm Recorded Future, released a report on a yearlong, stealth campaign by the ministry to hack internet service providers in Western Europe and the United States and their customers.

The lone hacking target to publicly confront the ministry was Visma, a Norwegian internet service provider with 850,000 customers. The goal of the attack on Visma was to gain broad access to its customers’ intellectual property, strategic plans and emails, including those of an American law firm that handles intellectual property matters for clients in the automotive, biomedical, pharmaceutical and tech sectors, according to Recorded Future.

The Visma attack was harder to trace than earlier incidents, which typically started with so-called spearphishing emails meant to steal personal credentials. This assault began with stolen credentials for a third-party software service, Citrix. And instead of using malware easily traced to China, the attackers used malware available on the so-called Dark Web that could have come from anywhere. They also used the online storage service Dropbox to move stolen emails and files.

After the Trump administration pulled out of the nuclear deal, Kirstjen Nielsen, the homeland security secretary, testified before Congress that her agency was “anticipating it’s a possibility” that Iran would resort to hacking attacks.

The Iranian attacks, which hit more than a half-dozen federal agencies last month, still caught the department off guard. Security researchers said the hacks, which exploited underlying weaknesses in the internet’s backbone, were continuing and were more damaging and widespread than agency officials had acknowledged.

Iranian hackers began their latest wave of attacks in Persian Gulf states last year. Since then, they have expanded to 80 targets — including internet service providers, telecommunications companies and government agencies — in 12 European countries and the United States, according to researchers at FireEye, which first reported the attacks last month.

The current hacks are harder to catch than previous Iranian attacks. Instead of hitting victims directly, FireEye researchers said, Iranian hackers have been going after the internet’s core routing system, intercepting traffic between so-called domain name registrars. Once they intercepted their target’s customer web traffic, they used stolen login credentials to gain access to their victims’ emails. (Domain name registrars hold the keys to hundreds, perhaps thousands, of companies’ websites.)

There is a long history of Iranian attacks against the United States, and episodes from five years back or longer are just now being made public.

Ms. Witt attended one of the conferences, the indictment says. Net Peygard used information she provided to begin a campaign in 2014 to track the online activities of United States government and military personnel, Treasury officials said.

Representatives for Iran’s Mission to the United Nations did not respond to requests for comment.

The recent Iranian attacks have unnerved American officials. But after issuing the emergency order about the ones last month, the Department of Homeland Security’s Cybersecurity and Infrastructure Security Agency has largely played them down.

An official with the cybersecurity agency said there was a belief that no information had been stolen and that the attacks had not “materially impacted” operations. But Mr. Read of FireEye and others said there had been a noticeable escalation in Iran’s digital espionage.

“If you tell the Iranians you’re going to walk out on the agreement and do everything you can to undermine their government,” said Mr. Brenner, the former counterintelligence official, “you can’t be surprised if they attack our government networks.”

Starbucks will be the next US brand to warn of China trouble after Apple,...

editor - January 11, 2019
0
Apple shares collapsed earlier this month after warning that iPhone sales would fall short because of weakness in the China economy. Starbucks will be next, according to Goldman...

editor - November 18, 2018
0
Papua New Guinea's prime minister, Peter O'Neill, said that "the entire world is worried" about tensions between China and the U.S.

editor - March 3, 2020
0
Six people have died in Washington state as the United States grapples with more than 100 cases of the disease caused by the novel coronavirus.

Education or espionage? A Chinese student takes his homework home to China

editor - July 24, 2018
0
Ruopeng Liu believes his work at a Duke lab was simply "fundamental research" that he brought back to China. His former professor thinks otherwise.

Remarks by Vice President Pence at the White House Initiative on Asian Americans and...

editor - February 1, 2020
0
When Wei Sun, a 48-year-old engineer at Raytheon Missile Systems, left for an overseas trip last year, he told the company he planned to bring his company-issued HP EliteBook 840 laptop along.

How Rich Chinese Parents Get Their Kids Into U.S. Colleges

editor - March 20, 2019
0
Last week, the news broke that dozens of wealthy American parents had paid up to $1.2 million apiece in bribes to guarantee their children places at top universities.

Chinese Chicken Is Headed To America, But It’s Really All About The Beef

editor - May 13, 2017
0
Cooked chicken from birds grown and raised in China soon will be headed to America — in a trade deal that's really about beef. Commerce...

editor - May 15, 2017
0
When the sister of President Donald Trump's son-in-law Jared Kushner promoted investment in her family's new skyscraper from a Beijing hotel ballroom stage earlier this month, she was pitching a controversial American visa program that's proven irresistible to tens of thousands of Chinese.

editor - August 25, 2017
0
President Donald Trump’s administration is looking for ways to pressure North Korea to stop developing a nuclear-weapons program, and some American analysts warn that...

Secretary of State Pompeo to Press China Concerns in Brazil

editor - December 29, 2018
0
The U.S. is looking to enlist Brazil’s newly elected right-leaning president in its trade battle with China and its efforts to isolate Venezuela’s leftist...