New job? Great. Many of them will pay China-like wages.

There is a new 1.2 million square foot Amazon warehouse in the downtrodden Massachusetts city of Fall River. It used to be a mill town, where mostly Portuguese, French and Lebanese immigrants stitched together suits and curtains for sale at Macy’s and Woolworth’s, both retail power houses owned by the richest men of the day. The city boomed as a cheap labor hub for New York for about fifty years then quietly slipped into oblivion. Average income in this dinosaur mill city is just $35,000 a year, below the national average, and far below the state’s average income too.

Yet, count those thousands of new jobs at the Amazon warehouse on Friday’s blockbuster jobs report.

It is without irony that Reuters used a picture of a FedEx delivery center in its headline report on today’s news of 2.5% higher wages this year, and the super low 4.3% unemployment rate. Former president Barack Obama truly did give President Donald Trump a head start.

Back in Fall River, MA, where 19% of the population are foreign born (more than the national average of around 13%), and at least a third of them are on the Supplemental Nutritional Assistance Program (SNAP), popularly known as food stamps, Amazon’s hiring spree here won’t make a dent in those numbers. So much for the tech world loving immigrants.

While the Amazon warehouse will help the city collect more taxes (oh wait, Amazon billionaire Jeff Bezos mananged a cool $15 million in tax breaks), it won’t make the locals any richer. At the very least, this is a decent part time gig at a brand named corporation; it’s a car payment, or a full-time job at 30 hours a week without benefits for a spouse with a college degree whose partner makes a little bit more. 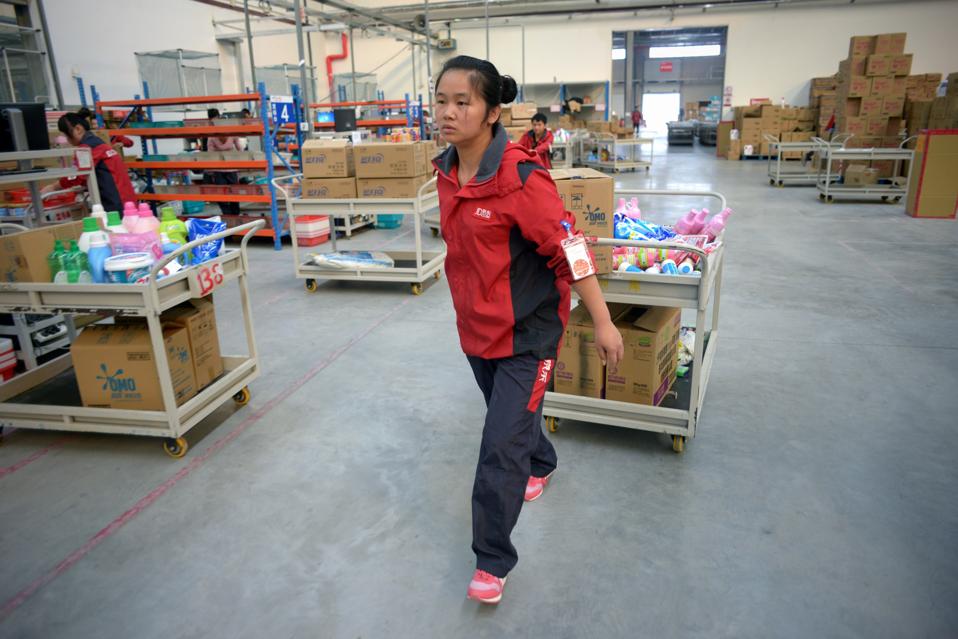 This picture taken on November 3, shows a JD.com employee pulling a trolley with goods at a company warehouse in China’s Heibei province. (Photo by WANG ZHAO/AFP/Getty Images)

Starting pay at the Amazon warehouse, carved out of a large lot with a new road called Innovation Way designed for Amazon-bound trucks, is at $12.75, no degree required. For inventory managers with warehousing experience, the pay is $14.70 an hour and requires a bachelor’s degree.

Hopefully, those hires do not have any student loans, or they will have to choose between rent, health insurance, a car, or Fannie Mae.

Some of the jobs are temporary hires through Integrity Staffing. The job description for one of the $12.75 an hour gigs includes the ability to stand for 10 to 12 hours straight in a fulfillment center where the temperature will occasionally exceed 90 degrees.

But seen another way, it is not those days of industrial expansion. Because the Amazon hiring that is part of today’s job numbers is not indicative of the boom times in that city, when clothiers like Anderson Little (long out of business) made three-piece suits for Manhattan city slickers. The people working at Amazon won’t make median income in one of the 10 poorest cities in Massachusetts. It is not much different from the typical retail job, the same ones in the ubiquitous American shopping mall now being replaced by e-commerce.

Fall River sits on the Rhode Island border. In Rhode Island, a family of three with a parent earning $13 an hour qualifies for food stamps.

Like any other retail gig, the Amazon employees are likely to be from dual income heads of households, or they will be young, single individuals either just starting out or hanging on for dear life.

The lowest paid workers in that warehouse, assuming 30 hours per week, would earn around $18,000 annually, or roughly $7,200 more than the median Chinese worker; a country where people still survive on $2,000 a year.

One can argue that a fork lift operator working at the Alibaba warehouses makes less. That is probably true. And of course Fall River’s median salary is much higher than that of Shanghai, China’s highest earning city. And professional service workers like doctors, even in low income cities like Fall River, earn more there than they do in China.

But China aside, in constant dollar terms, median weekly earnings in the U.S. have risen a whopping $15 a week since 2008, according to U.S. Bureau of Labor Statistics. Constant dollar measures inflation and cost of living increases in order to better gauge how far a dollar goes today versus years in the past. 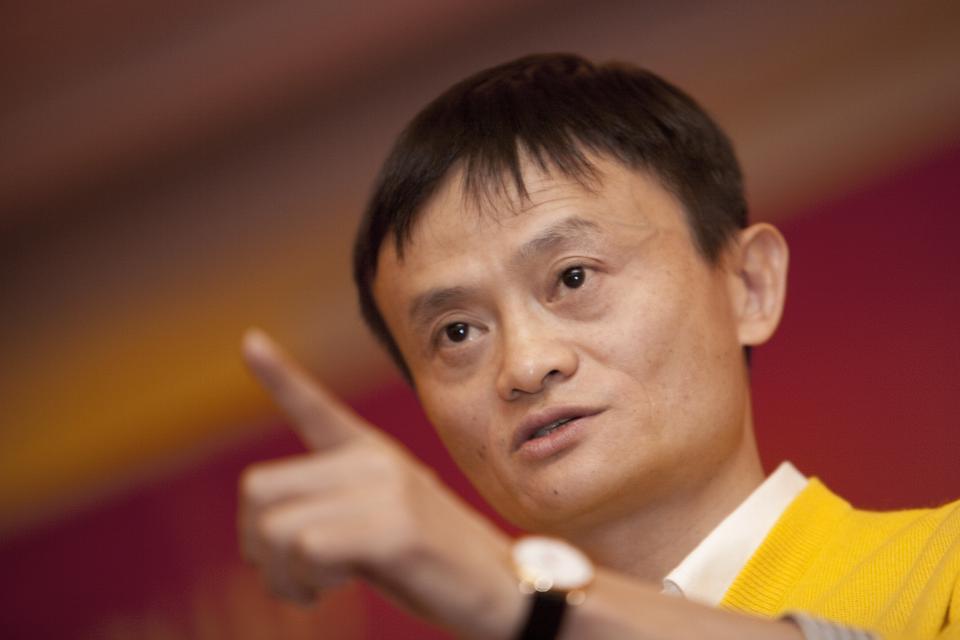 In current dollar terms, total weekly wages ended the fourth quarter of 2008 at $727 per week nationwide and hit $863 in the second quarter of this year, according to BLS data.

Assuming a recent graduate from the University of Massachusetts in the nearby town of Dartmouth was hired by Amazon at the best possible wage on offer, $14.75, and was putting in a 30 hour work week, they would gross $21,600.

In 2015, that type of annual pay would be considered poverty unless you were single. U.S. households in the lowest quintile of income earners had incomes of $22,800 or less, according to the U.S. Census Bureau.

Comparing changes in household income at selected percentiles shows that income inequality has increased from 1999 to 2015, based on Census findings.

Part of that is because the U.S. was hit by a recession in 2001 after the dot-com bubble burst, and again in 2008 after the housing bubble burst.

But there is something else worth noting here: China’s ascension to the World Trade Organization was a game changer.

U.S. median wage growth remains subdued over the last 15 years of China’s WTO entry, despite the unemployment rate dropping in half since the Great Recession. The securities market is a runaway train, but why aren’t Americans all buying summer homes and IWC “time pieces”.

Market gains and decling unemployment are not translating into better jobs, as the Amazon warehouse job offers suggest. The same phenomenon is happening in all the major economies. In economic jargon, this is described as the ‘flattening of the Phillips Curve’ says VTB Capital economist Neil MacKinnon.

“The impact of globalization and in, particular, the entry of China into the WTO in 2002 increased the global labor supply markedly,” he says. “Excess supply of Chinese labor and the stream of low cost Chinese goods into the world economy was a boon for global consumers and contributed to disinflationary price pressures, which some central banks said was the result of their successful inflation-targeting policies,” he says, in a jab to central bankers.

The after-effects of excess supply from China continue to linger. China now sets the global price of labor in manufacturing and may soon do the same in logistics and transportation. Alibaba, an Amazon rival, is the biggest online sales platform in the world. They’re building up warehouses just as fast as Amazon. That is Amazon’s competition worldwide.

The political and social side-effect of this is lower productivity, the “unskilling” of blue collar workers and to some extent, a weakening outlook for middle income labor, particularly in the manufacturing sector.

The China-esqsue income for the general labor pool might not spark a backlash against the Chinese, Washington’s favorite punching bag. Instead, it will favor future political backlashes against globalization and the corporations seen driving up inequality — and driving down mobility — because of it.

Trump, once a hero in China, is now seen as erratic and unreliable

editor - July 31, 2018
0
In 2016, after Donald Trump won the Republican nomination for president, social media in China embraced him with tribute pages including the “Trump Fan Club” and “Great Man Donald Trump.”

editor - September 2, 2020
0
Fifteen Chinese researchers must leave the country after the University of North Texas cut ties with the organization that funds them.

Letter of Recommendation: Karaoke at Home

editor - July 8, 2017
0
The latest in Chinese home karaoke — a portable microphone that connects to your smartphone, with a built-in speaker — has now made solo singing more appealing than ever.

Trump administration mulls requiring 5G equipment for domestic use to be manufactured outside of...

editor - June 23, 2019
0
The Trump administration is considering requiring that next-generation 5G cellular equipment used in the U.S. be designed and manufactured outside China

Why Wealthy Chinese Women Are Flocking to LA to Give Birth

US says China has ‘not altered’ unfair trade practices

editor - November 21, 2018
0
The Trump administration has accused China of not changing its "unfair" practices, inflaming a trade dispute between the world's two largest economies. In an update...

editor - March 9, 2020
0
The Dow Jones Industrial Average sank more than 2,000 points on Monday, its worst day since 2008, as fears about the spread of the new coronavirus and an oil price war sent investors scrambling out of stocks.

editor - November 1, 2020
0
Lude Media reported that the contents in the Hunter Biden hard drives have been uploaded to Google Cloud. People can have access to it.

editor - March 6, 2020
0
Secretary of State Mike Pompeo on Friday blamed China for putting the U.S. “behind the curve” in trying to contain the coronavirus outbreak. In a CNBC interview,...

editor - April 20, 2020
0
Thousands of Americans have reportedly signed onto a class action lawsuit in the US state of Florida which seeks compensation from the Chinese Government for COVID-19 damages, as Western politicians increasingly call for accountability.

Tim Cook is losing his Apple bet on China