A man has been arrested in connection with the disappearance of a visiting Chinese graduate student last seen June 9 on the University of Illinois campus, the US attorney’s office for Central Illinois said Friday.

Investigators with the FBI think the student, Yingying Zhang, 26, is probably dead, a news release from the attorney’s office said.
Brendt Christensen, 27, of Champaign, Illinois, will face a charge of kidnapping, the news release said.
Christensen was under surveillance Thursday when agents overheard him saying he kidnapped Zhang, a criminal complaint says. Christensen said he took Zhang back to his apartment, the complaint adds. 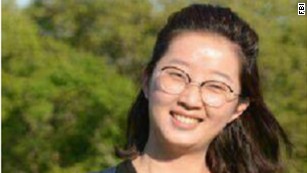 “Based on this, and other facts uncovered during the investigation of this matter, law enforcement agents believe that Ms. Zhang is no longer alive,” the statement from the US attorney’s office and FBI said, without offering further details.
The court document also says a search of the suspect’s car revealed the front passenger door, next to where Zhang would have been sitting, was cleaned to a “more diligent extent.”
The FBI says Christensen was driving the black Saturn Astra that was captured on security camera video picking up Zhang the afternoon of June 9.
She was shown entering the front passenger side of the vehicle, which then drove away.
On June 15, Christensen admitted picking up Zhang, the complaint says, but he told the FBI that day her let her out just a few blocks away.
“Our thoughts are with Yingying’s family, loved ones. Please support fellow community members tonight,” police at the University of Illinois said.
Also in the criminal complaint is the allegation that Christensen had used his phone in April to visit online forums with titles such as “Abduction 101,” “Perfect abduction fantasy,” and “planning a kidnapping.”

Christensen was a graduate student in the physics department and a teaching assistant until May, a University of Illinois professor told CNN.
“Everybody is shocked by this,” said Lance Cooper, an associate head for graduate studies in the department. “There were no flags, no discipline issues with him, no problem with his teaching, no problems with his coursework.”
Cooper said he didn’t think Christensen would have had any academic interactions with Zhang, who came to the United States within the past two months.
David Meldgin, a teaching assistant in the physics department, said he had an office next door to Christensen for two years but they spoke only a few times.
“He was a quiet person in meetings, but he always helped students who needed help.” Meldgin said. “I’m really surprised.”

There are more than 300,000 Chinese students and scholars attending US universities. Zhang’s disappearance triggered widespread concern in China, with discussion of the case dominating both social and traditional media.
Zhang had a year-long position at the university’s department of natural resources and environmental sciences. She graduated from Beijing’s prestigious Peking University last year with a master’s degree in environmental engineering, according to a department webpage.
Christensen’s first court appearance is at 10 a.m. Monday in federal court in Urbana. It is unclear whether Christensen, who is still in custody, has an attorney.
By Ralph Ellis, CNN

President Trump on Modernizing Immigration System for a Stronger America

editor - August 5, 2020
0
The Clean Network program is the Trump Administration’s comprehensive approach to guarding our citizens’ privacy and our companies’ most sensitive information from aggressive intrusions by malign actors, such as the Chinese Communist Party (CCP).

US tariffs ‘like knife to the neck’, says China trade negotiator

editor - September 25, 2018
0
One of China's top trade negotiators has accused Washington of putting "a knife to the neck" with massive tariffs, as Chinese ministers hit back...

The Tide Is Turning For Trump, And America Will Not Give Up the Fight

editor - November 29, 2020
0
McCain, from the Powell firm (Sidney Powell, P.C.), said: “We should have felt this shift at least a week ago, but it’s not too late if we pick up the pace and break things up.” So, what positive changes have occurred?

The United States Is Going After China’s Banks

editor - August 29, 2017
0
San Antonio, like El Paso and Houston, evolved with a significant Chinese community, despite federal laws that banned them from the country for decades. According...

editor - June 20, 2018
0
The Trump administration ratcheted up its criticism of China in a report released by the White House on Tuesday detailing its claims of "economic aggression" by the Asian...

China to spend over $1 trillion on planes over next 20 years: Boeing

editor - February 1, 2020
0
When Wei Sun, a 48-year-old engineer at Raytheon Missile Systems, left for an overseas trip last year, he told the company he planned to bring his company-issued HP EliteBook 840 laptop along.

editor - May 28, 2020
0
The House of Representatives on Wednesday passed legislation calling for sanctions against Chinese officials for the detention and torture of Uighur Muslims in the country’s western region of Xinjiang.

Chinese Immigrants Could Soon Take Over ABCs in America

Chinese families spent $24 billion on ‘golden visas’ to U.S., other...