At least 14 applications were filed by Ms Trump’s business, which bears her name, on 28 March, according to a report by The Wall Street Journal last week.

Ms Trump’s business, which specialises in high-end clothing, shoes and accessories, said that the applications were filed to prevent others from profiting from her name rather than any intention to boost sales in China. 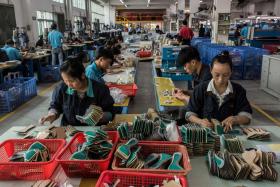 But Larry Noble, general counsel for US watchdog group Campaign Legal Center, told CNN on Monday that the revelations highlight how the Trump administration may still be allowing its business interests to influence US relations with other countries.

The Chinese government has insisted that its trademark review practices are carried out in accordance with the law.

Attorneys for Ms Trump did not respond to a request for comment from CNN on Mr Noble’s remarks.

The latest trademark requests follow the 36 applications that the company filed in China last year around the time when Ms Trump joined her father’s administration as a White House adviser.

Although Ms Trump no longer has a management role at her company, she reportedly retains an ownership stake and therefore still could benefit from the company’s profits despite her attorney insisting that her assets had been moved into a trust.

Ms Trump’s company has said that the applications constitute “normal course of business” and were made in response to a “surge” in unrelated third parties attempting to adopt the Ivanka Trump name for themselves, according to CNN.

But Mr Noble said that Ms Trump should either have sold her entire stake or removed her company from foreign markets in order to avoid conflicts of interest.

“When you go into government, you make sacrifices,” he said. “When you’re a public servant you’re supposed to give 100 per cent of your attention to your work. You’re supposed to have the American public as your sole interest.”

Ms Trump’s business currently has 18 registered trademarks in China and five provisionally approved, according to CNN.

What Does China Want? How US Technology Turned Beijing into a Global Military Power

editor - July 28, 2017
0
IT WAS JUST ANOTHER WEST COAST FUND-RAISER, THE THIRD in a row that day for Bill Clinton. Guests nibbled on salmon and took turns...

China’s Spies Are on the Offensive

editor - August 30, 2019
0
China’s spies are waging an intensifying espionage offensive against the United States. Does America have what it takes to stop them?

editor - July 1, 2020
0
The U.S. House of Representatives on Wednesday unanimously passed a sanctions bill to penalize China for imposing a strict new security law in Hong...

The Chinese Culinary Paradise Only Insiders Know About

editor - February 21, 2019
0
The United States and China have started to outline commitments in principle on the stickiest issues in their trade dispute, marking the most significant progress yet toward ending...

editor - May 20, 2017
0
Chinese app makers are reportedly upset with Apple after it issued a new policy that recognizes tips as in-app purchases.

San Francisco is a ‘nirvana’ for China’s main intelligence agency — and the center...

editor - July 28, 2018
0
San Francisco and Silicon Valley are top targets for China’s main intelligence agency and Beijing’s efforts to steal billion of dollars in US trade...

How my mother and I became Chinese propaganda

editor - September 9, 2020
0
Immigrant struggles in America forged a bond that became even tighter after my mother’s A.L.S. diagnosis. Then, as COVID-19 threatened, Chinese nationalists began calling us traitors to our country.

12 experts on how the US should hold Communist China accountable...