Business leaders are reacting to a new trade deal between the United States and China.

Some observers say the agreements do little to help the United States, and fail to deal with issues concerning the Chinese market. But others say the trade deal is evidence of progress.

The deal is part of the 100-day plan announced after a meeting between the Chinese and U.S. presidents last month. The plan opens up Chinese markets, mostly for finance industries and industries based on commodities, such as mining and agriculture.

Robert Atkinson is president of the Information Technology and Innovation Foundation. He said the trade deal fails to identify issues facing advanced industries that are important to America’s economic future.

In a statement, Atkinson said the deal gives China the ability “to use its massive foreign reserves to buy up American companies in advanced industries.” He urged the administration of President Donald Trump to stop thinking mainly about the U.S. trade deficit with China.

The deal means nothing

Derek Scissors is with the American Enterprise Institute, a public policy research group in Washington. He said the trade deal means almost nothing since China has promised to reduce restrictions on American businesses before.

Scissors does not think that the U.S. trade deficit with China will be reduced this year. He urged the Trump administration to pressure China to reduce the amount of money it gives to state-owned companies. He noted if that happens, foreign businesses will be able to capture a larger share of the Chinese market.

Scissors also wants the administration to work on reducing Chinese involvement in the theft of intellectual property. He said the United States should threaten action against China as a way to cut down on the illegal copying of American products.

Christopher Balding is a professor with the Peking University HSBC Business School. He said the deal between China and the United States is not a major agreement. But he thinks it is a step forward for the Trump administration.

Balding told VOA that China has used what others have called a “delay-and-diversion” policy and has waited for years to do what it promises to do. He said some of the promises were made when China became a member of the World Trade Organization in 2000.

Balding said the United States does not have the ability to force China to open its market. But he said China appears to react to the messages written by Trump on the social networking website Twitter. He said those Tweets may give the U.S. some untraditional influence in pushing China.

C.Y. Huang is a partner at the financial services company FCC Partners. He said it is important for American companies to demand full access to the Chinese market. But he warned that the Americans are being beaten by their fast-growing Chinese competitors.

“China is no longer afraid of opening up its market and competition from the United States,” Huang told VOA. 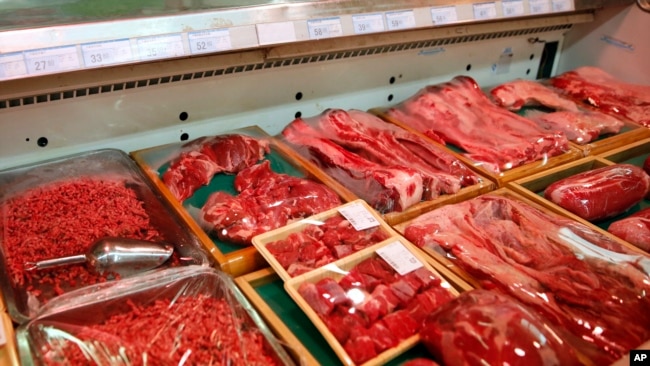 US beef is expected to reach Chinese markets under the agreement.

The Trump administration says the trade deal is a major one. U.S. Commerce Secretary Wilbur Ross said China will open its market to American beef exports by the middle of July. At the same time, the United States will begin to permit imports of cooked poultry from China.

Ross said the trade deal will help to reduce the U.S. trade deficit with China — which reached $347 billion last year.

“This is more than has been done in the whole history of U.S.-China relations on trade,” Ross told reporters at the White House. He said the deal will go a long way to reducing the trade deficit.

Joyce Huang wrote this story for VOANews.com. Christopher Jones-Cruise adapted her report for Learning English. George Grow was the editor.

Chinese and Iranian Hackers Renew Their Attacks on U.S. Companies

editor - February 18, 2019
0
Businesses and government agencies in the United States have been targeted in aggressive attacks by Iranian and Chinese hackers who security experts believe have...

editor - May 22, 2019
0
A bipartisan group of senators have held classified briefings with intelligence officials and American businesses to warn them about the dangers China presents.

Please remember this: The Gettysburg Address

editor - September 29, 2020
0
Ever since Lincoln wrote it in 1864, this version has been the most often reproduced, notably on the walls of the Lincoln Memorial in Washington. It is named after Colonel Alexander Bliss, stepson of historian George Bancroft. Bancroft asked President Lincoln for a copy to use as a fundraiser for soldiers.

China trying to force Chinese nationals living in US to return home – FBI...

editor - July 7, 2020
0
Chinese agents have been pursuing hundreds of Chinese nationals living in the US in an effort to force their return, as part of a global campaign against the country’s diaspora, known as Operation Fox Hunt, the FBI director has said.

editor - November 16, 2018
0
Chinese telecom giant ZTE assisted Venezuela in the development of a new smart card as part of a program similar to China's controversial social...

editor - November 29, 2018
0
Beijing is mounting an aggressive influence campaign targeting multiple levels of American society, according to a report published Thursday that is written by some...

editor - July 29, 2017
0
For all of the angst concerning trade deficits with China, the United States has something China increasingly needs: rice.

editor - June 23, 2019
0
FedEx Corp said on Sunday an operational error prevented a Huawei Technologies package from being delivered to the United States, just weeks after the U.S. delivery company said an error led to the Chinese firm’s packages being misdirected.

The NBA Should Leave China

How Trump’s Uncertainty on Africa Could be China’s Gain