The United States and China have agreed to take action by mid-July to increase access for U.S. financial firms and expand trade in beef and chicken among other steps as part of Washington’s drive to cut its trade deficit with Beijing.

The deals are the first results of 100 days of trade talks that began last month, when a meeting between U.S. President Donald Trump and Chinese President Xi Jinping proved far more friendly than had been expected after last year’s U.S. presidential campaign, but the immediate impact was unclear.

“This will help us to bring down the deficit for sure,” U.S. Commerce Secretary Wilbur Ross said at media briefing in Washington. “You watch and you’ll see.”

By July 16, the 100th day after the leaders’ meeting, China agreed to issue guidelines that would allow U.S.-owned card payment services “to begin the licensing process” in a sector where China’s UnionPay system has had a near monopoly.

China will also allow U.S. imports of beef no later than July 16, and the United States will issue a proposed rule to allow Chinese cooked poultry to enter U.S. markets.

Foreign-owned firms will also be able to provide credit rating services in China.

“We believe that Sino-U.S. economic cooperation is the trend of the times… We will continue to move forward,” Chinese Vice Finance Minister Zhu Guangyao told a Beijing media briefing.

Trump had pledged during his presidential campaign that he would stop trade practices by China and other countries that he deemed unfair to the United States. His tough talk toward Beijing had fueled early fears of a trade war. 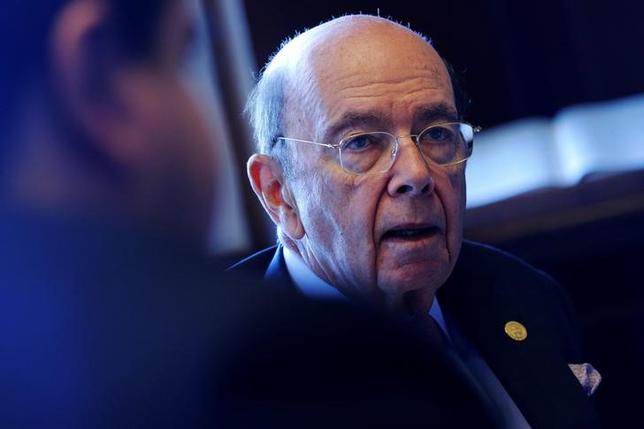 U.S. Commerce Secretary Wilbur Ross sits for an interview in his office in Washington, U.S. May 9, 2017. REUTERS/Jonathan Ernst

But Trump’s rhetoric toward China has softened in the past month, expressing admiration for Xi and saying he wanted Beijing to help deal with the North Korean nuclear threat.

Shortly after their meeting, Trump said he had told Xi that China would get a better trade deal if it worked to rein in North Korea. China is neighboring North Korea’s lone major ally.

On Friday, when asked whether the trade talks with the United States were related to North Korea, Zhu said economic issues should not be politicized.

But while the world’s two biggest economies agreed to take a number of steps by July 16, it was not clear how much these new deals would increase trade in the near term.

Ker Gibbs, the chairman of the American Chamber of Commerce in Shanghai, said the measures were a good beginning but not a breakthrough.

“Past foot-dragging means we won’t celebrate until these promises are executed,” Gibbs said, calling the opening in the electronic payments market “mainly symbolic”.

“This should have been done years ago when it would have made a difference. At this point, the domestic players are well entrenched so foreign companies will have a hard time entering the China market.”

China is the top export market for U.S. agriculture products, with the total value of exports rising by more than 1,100 percent since 2000 to $21.412 billion in 2016, so beef sales are potentially lucrative for U.S. exporters.

China had conditionally lifted its longstanding import ban on American beef last year, but few purchases have been made. The ban was imposed in 2003 due to a case of bovine spongiform encephalopathy (BSE), or mad cow disease, in Washington state.

And U.S. credit card operators Visa Inc (V.N) and MasterCard Inc (MA.N) have yet to be independently licensed to clear transactions in China, despite a 2012 WTO ruling mandating that Beijing open the sector and rules issued by the central bank to let foreign firms enter the market.

Visa said in an emailed statement it looked forward to submitting an application for a bank-card clearing institution license, which, “once granted”, would allow it to support economic development in China.

MasterCard welcomed the announcement, saying it looked forward “to having full and prompt market access in China”.

The United States also signaled that it was eager to export more liquefied natural gas, saying China could negotiate any type of contract, including long-term contracts, with U.S. suppliers.

For U.S. gas drillers, China provides a potential customer base beyond countries such as Japan and South Korea, where the long-term demand outlook is bleak due to mature economies, rising energy efficiency and falling populations.

Potential cooperation between the United States and China on LNG would not have any immediate impact on supplies, as China currently does not need new gas supplies and the United States is not yet able to deliver more.

Randal Phillips, Mintz Group’s Beijing-based managing partner for Asia, said that Washington was too focused on selling more to China and should instead seek to address structural imbalances created by Chinese industrial policies and barriers to investment.

“That’s going to be the challenge, and hopefully the Trump administration doesn’t start declaring victory,” he said.

editor - July 13, 2020
0
The Chinese government has announced sanctions against US officials, including the Republican senators Marco Rubio and Ted Cruz, in response to US sanctions over Beijing’s treatment of ethnic and religious minorities in Xinjiang province.

editor - December 15, 2018
0
President Donald Trump on December 14 said a major US-China trade deal could emerge in the near future, saying that China's position has been weakened by the economic impact of the tariffs war.

editor - November 2, 2020
0
Trump’s comments on Fauci less than 48 hours before polls close all but assure that his handling of the pandemic will remain front and centre heading into Election Day.

Ai Weiwei Believes Americans Still Have to Fight for Democracy

editor - June 30, 2017
0
He is the most famous Chinese artist living today, a political and artistic multi multi-hyphenate: political detainee, activist, philosopher, provocateur, a sculptor, architect, filmmaker, installation artist, and the only person I’ve ever met who has an asteroid named after him: 83598 Aiweiwei.

Vice President Pence Set to Accuse China of Trying to Undermine Trump in 2018...

editor - June 5, 2018
0
For many U.S. allies, Secretary of Defense Jim Mattis is the last of the Trump administration’s so-called grown-ups in the room. So at Asia’s...

Chinese ‘Greenfield’ Investments Are a Threat More Than a Benefit

editor - June 27, 2018
0
In the past month, the House and Senate each marked up legislation to reform the Committee on Foreign Investment in the United States (CFIUS),...

editor - August 21, 2017
0
Chinese buyers spend more money on US residential real estate than any other foreign investors, and now we have a better sense of where they’re putting...

China’s Alipay takes on Apple in US expansion

editor - May 10, 2017
0
Customers will be able to use Alipay at about 4 million businesses after a deal was signed with credit card processing service First Data.

Cornell Cuts Ties with Chinese School After Crackdown on Students

editor - October 29, 2018
0
Scholars at Cornell’s Industrial and Labor Relations School said they were suspending a 6-year-old research and exchange program with Renmin University in Beijing after the school punished at least a dozen students who joined a nationwide call for better protections for low-income workers in China.