U.S. President Donald Trump’s proposal for massive corporate tax cuts has sparked a sharp rebuke from Chinese officials, with some voicing concern that the move could trigger a tax war and prompt companies to pull out of China.

Analysts, however, are skeptical the move could trigger a tax cut race between the world’s two largest economies.

Last Wednesday, the Trump administration proposed to cut the corporate tax’s top rate from 35 percent to 15 percent and provide a one-time repatriation rate for international earnings parked overseas with an estimate value of more than $2.6 trillion.

Some observers have said the new tax deal, if approved by Congress, may help lure U.S. firms to remit overseas profits home and even bring their operations back to the U.S. – a further push for Trump’s ‘buy and hire American’ pledge.

The U.S.’s move is largely welcomed by businesses in China especially if it stimulates Beijing to follow suit, but some companies say their investment decisions aren’t solely based on tax incentives. 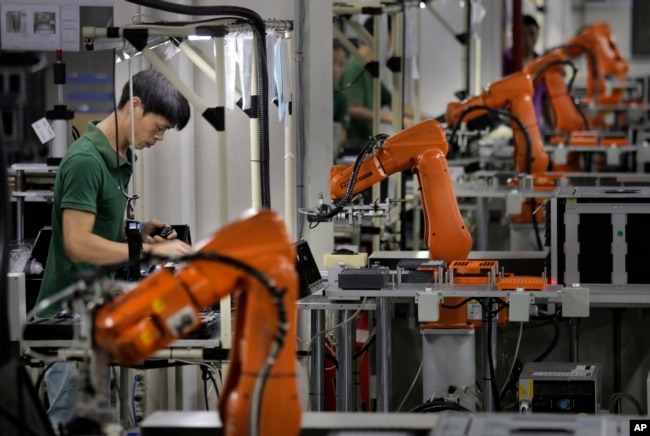 An employee works amid robot arms at a technology factory in the southern Chinese industrial boomtown of Shenzhen, Aug. 21, 2015. Chinese officials are calling on the U.S. to act responsibly on matters of taxation.

“Whether we will increase our investment in the U.S., that will depend on the footprint of our global expansion,” Connie Hu, CFO of Chlitina, the largest skin-care brand in China, told VOA in a written reply.

Still, the tax plan has apparently worried China, which is already fighting a capital exodus problem with tight control of outbound money flows.

On Friday, Liao Tizhong, director-general of China’s State Administration of Taxation, showed no hesitation to accuse the U.S. of provoking a taxation war and warn of its spillover effect on the world economy.

“We believe this is a mistake, and we unequivocally oppose this tax collection competition. … This is not only the point of view of China, but also that of all national leaders of the G-20 Hangzhou Summit,” Liao told local media, adding the move could hurt many export-oriented economies, which can’t afford to cut taxes.

“Taxation is a sovereign matter and Trump can cut taxes, but a great power should undertake its due responsibility. China … doesn’t conduct [its] affairs irresponsibly, neither should the leader of the largest power,” he added.

Many observers believe China may be pressured to follow suit, although the State Council had just approved measures to ease the burden on businesses, which authorities say will amount to more than 380 billion yuan ($55 billion) in the total tax reduction this year.

Liao Qun, chief economist at China CITIC Bank International, said that Trump faces an uphill battle to have his tax cut proposal first passed and then make it work as his administration hasn’t addressed potential tax losses, which will add serious woes to the country’s already worsening deficits.

The tax plan, he added, will also have a limited effect on re-shoring U.S. businesses as many of them still count on China for cheap labor and comprehensive supply chains.

Even though China totals a higher tax rate, it has to weigh its own fiscal situation before competing with the U.S. on tax cuts. 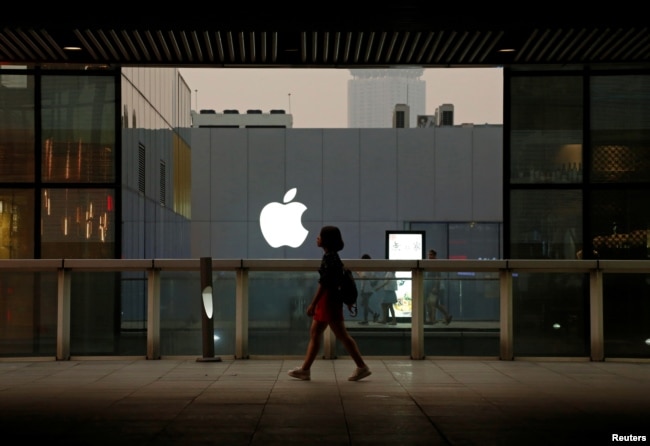 FILE – A woman walks past an Apple store in Beijing, China, July 28, 2016. Observers warn that the Trump administration succeeding in having Apple move manufacturing to U.S. soil would deal the Chinese economy a huge blow.

“China, in the medium to long run, will be required to cut more taxes. But in the short run, there’s no need, neither should it follow Trump’s lead,” Liao told VOA.

According to this year’s Paying Taxes, a report by PwC and the World Bank Group, the total tax rate in China affects 68 percent of a company’s commercial profits, compared to that of 44 percent in the U.S.

Liang Kuo-yuan of Taipei-based Yuanta-Polaris Research Institute also argued that it’s not clever for China to engage in a taxation war with the U.S.

But he warned that a potential exodus of China-based multinationals will have a big impact on its wish to move up the value chain by fostering a knowledge-based economy.

“Shall the U.S. succeed in luring [overseas] capital back home or even bring [the manufacturing of the] iPhone back on the U.S. soil, it will deal the Chinese economy a huge blow, which may see difficulty in sustaining an above 6 percent growth,” Liang said, adding that it will be imperative for China to maintain a competitive tax environment to retain these multinationals.

editor - April 1, 2020
0
President Donald Trump on Tuesday warned Americans to brace for a “hell of a bad two weeks” ahead as the White House projected there could be 100,000 to 240,000 deaths in the U.S. from the coronavirus pandemic even if current social distancing guidelines are maintained.

editor - June 6, 2017
0
China has told the US to stop asking questions about the number of people killed, detained or who are still missing from the Tiananmen Square tragedy.

US Secretary of State Pompeo congratulates Taiwan on the success of its ‘free and...

editor - November 25, 2018
0
United States Secretary of State Mike Pompeo has congratulated Taiwan on its local government elections, calling them an example of democracy in action for...

editor - August 4, 2017
0
New job? Great. Many of them will pay China-like wages. There is a new 1.2 million square foot Amazon warehouse in the downtrodden Massachusetts city...

editor - December 11, 2019
0
A US offensive against the World Trade Organization will effectively shutter the group's system for settling disputes, at a time it's most needed.

Why China’s big meeting will matter for US markets

editor - September 12, 2017
0
The Chinese National Congress is set to meet in mid-October, and some predict the session will have wide-reaching implications for global markets and the economy. Discussions around...

editor - May 19, 2017
0
The new U.S.-China trade deal, which includes 10 initial agreements on agricultural trade, financial services, investment and energy, is drawing mixed reviews. The agreement is...

editor - October 10, 2018
0
The Trump administration is pushing forward with an aggressive and public effort to condemn China for a wide series of transgressions, a strategy that risks intensifying an already high-stakes standoff with Beijing.

How Trump’s Uncertainty on Africa Could be China’s Gain

Huawei and its U.S. Affiliate Indicted for Theft of Trade Secrets,...