In the United States, some of the world’s most powerful technology companies face rising pressure to do more to fight false information and stop foreign infiltration.

From his small town on the windswept grasslands of the Inner Mongolia region of China, Mr. Zhao, 27, scours the internet for calls to violence, fake news and pornography. He is one of a battalion of online “supervisors” whom Weibo, one of China’s biggest social media platforms, announced last month it would hire to help enforce China’s stringent limits on online content.

For years, the United States and others saw this sort of heavy-handed censorship as a sign of political vulnerability and a barrier to China’s economic development. But as countries in the West discuss potential internet restrictions and wring their hands over fake news, hacking and foreign meddling, some in China see a powerful affirmation of the country’s vision for the internet.

“This kind of thing would not happen here,” Mr. Zhao said of the controversy over Russia’s influence in the American presidential election last year.

Besides Communist Party loyalists, few would argue that China’s internet control serves as a model for democratic societies. China squelches online dissent and imprisons many of those who practice it. It blocks foreign news and information, including the website of The New York Times, and promotes homegrown technology companies while banning global services like Facebook and Twitter.

In his new capacity, he scours Weibo in search of the lurid and illicit. Some posts, he explained, are thinly veiled solicitations for pornography or prostitution, including one message he reported to the police the other day for using what he said was a euphemism for selling sex.

At the same time, China anticipated many of the questions now flummoxing governments ranging from the United States to Germany to Indonesia. Where the Russians have turned the internet into a political weapon, China has used it as a shield.

In fact, when it comes to technology, China has prospered. It has a booming technology culture. Its internet companies rival Facebook and Amazon in heft. To other countries, China may offer an enticing top-down model that suggests that technology can thrive even under the government’s thumb. 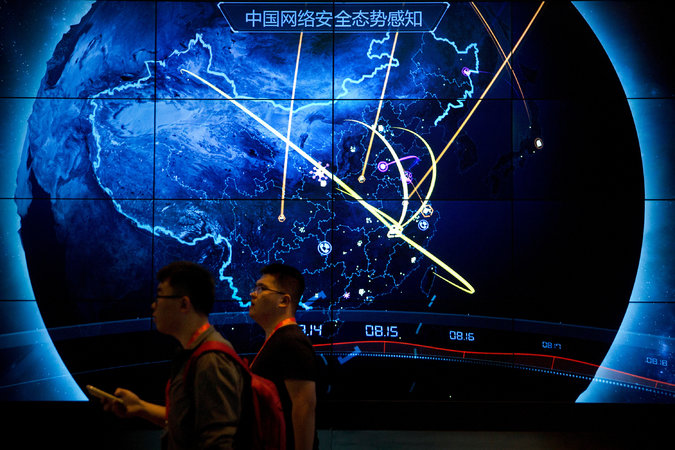 “It doesn’t matter how efficient the internet is,” said Zhu Wei, deputy director of the Communications Law Research Center at the China University of Political Science and Law, which advises the government on internet laws. “It won’t work without security.”

China is not resting on its laurels.

In the weeks leading up to the major party congress that opens in Beijing on Wednesday, the country’s internet regulator, the Cyberspace Administration of China, has issued a raft of new regulations.

One, which took effect last week, holds the creators of online forums or group chats responsible for their users’ comments.

Another bans anonymous users, a blow at the bots and deceptive accounts — like those on Facebook and Twitter — that distributed false stories aimed at American voters.

The article was in keeping with President Xi Jinping’s early recognition of the power of the internet. Mr. Xi created and empowered the cyberspace administration, which has subsumed many of the overlapping agencies that once governed content in cyberspace.

The administration is now seen as an institution as important as the defense ministry. Since last year, it has been led by Xu Lin, 54, a party technocrat and former propaganda official, who, like other influential officials who previously worked beside Mr. Xi in Shanghai, has soared through the ranks.

Samm Sacks, a senior fellow with the Center for Strategic and International Studies, said the cyberspace administration was a core part of Mr. Xi’s vow to make China a cyber superpower, on par with the United States. 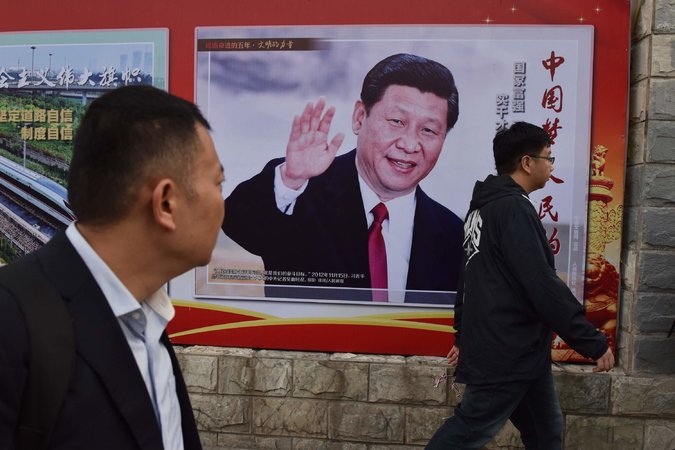 “There’s a recognition that technology has advanced more quickly than the government’s ability to control it,” Ms. Sacks said. Russia’s interference with Facebook, to cite only one example, was “justification for exactly what they are doing here.”

China’s homegrown internet companies are key to its top-down approach. Tech firms are expected to keep content on file for 60 days and report to the police any forbidden content. The government is acquiring small equity stakes in some tech companies in exchange for board seats, giving it a direct role in the governance of new internet titans.

The tech firms also face tight penalties if they fail to keep users in line. In September, the cybersecurity administration imposed fines on social media platforms owned wholly or in part by three of China’s biggest tech companies — Tencent Holdings, the Alibaba Group and Baidu — for failing to stop the circulation of fabricated rumors, violence and pornography. (Companies can be fined up to $76,000 per offense, and have their business licenses canceled, if they cannot prevent the transmission of banned content.)

Human rights observers worry that the crackdown may have a chilling effect on political speech that is already tightly curbed. Last month, for example, the police raided the home of a university professor, Liu Pengfei, who had hosted a current-affairs forum on Tencent’s WeChat software, one of the world’s most popular messaging apps.

In exchange for accepting tight controls, China internet companies have been allowed to grow while their foreign rivals were shut out of the country. They can now claim their own technology successes. Tencent’s WeChat has transformed social life in China: People use it to chat, pay bills, transfer money, book a cab and hook up romantically.

China is now embarking on an ambitious project to dominate fields like artificial intelligence, and some say China could be at an advantage. It has more than 700 million internet users, and it doesn’t have a robust legal framework to deal with data privacy intrusions. That makes it easier for companies to harness user data — which is core to developing A.I. technology.

Still, China’s advantage could be double-edged. Chinese internet companies have struggled to expand abroad, which experts say stems in part from their dependence on their government.

“To a large extent, the competitive advantage is the political relationship they have with the government there and that’s not something you can carry across borders,” said Lokman Tsui, an assistant professor at the Chinese University of Hong Kong. 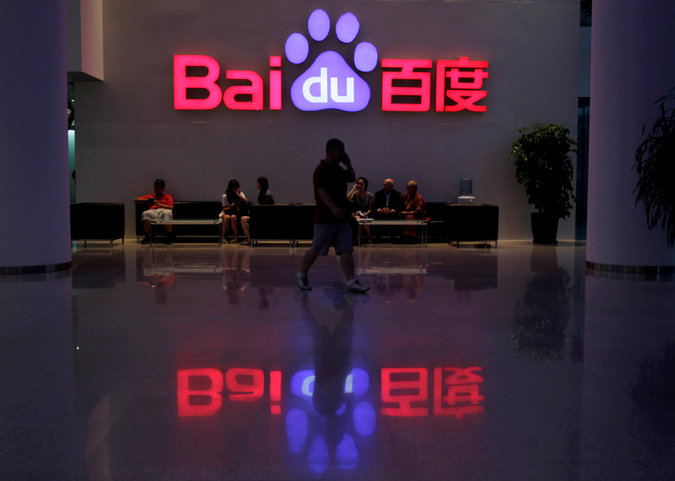 In September, the administration imposed the maximum fine allowable on three of China’s biggest social media operators, Tencent Holdings, the Alibaba Group and Baidu, for failing to stop the circulation of fabricated rumors, violence and pornography. CreditReuters

Moreover, not all of the new restrictions have been welcomed here. Some of the companies — and internet users — balked at tightened enforcement of rules requiring users of social media platforms to provide their real identities to the companies (although they may still use online pseudonyms). Weibo’s announcement that it was seeking 1,000 recruits to become supervisors to report illegal content online — the definitions of which can be expansive — was met by derision on its own site.

“Online and offline, Big Brother is watching,” wrote one user, who used the handle mingxinjianxing.

But when it comes to the controversy over Russia’s intervention, there has been little discussion here. Among the few who are discussing it on Weibo, some expressed shock that the United States does not censor information shared on social media platforms.

Mr. Zhao, the young volunteer on Weibo, is typical of those here who believe government control is justified.

In a restaurant called Europa, Mr. Zhao — who declined to disclose details of where and how he works — described China’s system not as “Big Brother” so much as a younger brother, which he is, protecting children, like those of his sister, from harmful material.

“Even though the internet is virtual, it is still part of society,” he added. “So in any space I feel no one should create pornographic, illegal or violent posts.”

When he reports abuse, it is the police that follow up. He excitedly displayed his smartphone to show the latest of his more than 3,000 followers on Weibo: the division of the Beijing police that monitors the internet.

“Normally, if you don’t do bad things, you don’t get followed by the police,” he said. “I think this — for someone who has been online for so many years — is really special.”

News editor - 24/03/2019
0
Italy has become the first developed economy to sign up to China's global investment programme which has raised concerns among Italy's Western allies. A total...

human rights editor - 27/06/2017
0
The Vatican has expressed "grave concerns" for one of its bishops who was detained after being "forcibly removed" from his diocese in China. Chinese Catholic...

Business editor - 15/08/2017
0
A month after Apple revealed its plan to open its first China-based data center in Guizhou, the Guizhou provincial government announced today (in Chinese) that it...

Art & Entertainment editor - 01/10/2017
0
First, a digression over in China, where Jackie Chan and Pierce Brosnan's The Foreigner scored $11.4 million on its opening day in China on Saturday, before...

human rights editor - 27/06/2017
0
London (AFP) - The world is watching Hong Kong as a "test case" of whether Chinese promises mean anything, Britain's last governor said ahead...

Society editor - 24/06/2017
0
MORE than 100 people have been buried alive in a massive landslide, according to state media. Chinese media reports at least 40 homes in the...

trade war editor - 29/08/2019
0
On a couple of occasions in the past week or so, U.S. Vice-President Mike Pence has reaffirmed U.S.'s strong resistance to the Communist regime...

The communist government under vile CCP must be overthrown

Religion editor - 12/03/2019
1
If eligible 1.4 billion Chinese were granted the right to vote, over 90% of them would agree to replace the communist dictatorship with a...

China’s space programs: not for the future good of humanity

Military editor - 17/03/2019
0
China has been extremely ambitious since the communist party came to power in 1949. In the pretext of nationalism and patriotism, China has never...

US china editor - 29/11/2020
0
The House is set to vote on bipartisan legislation that would impose restrictions on Chinese companies listed on U.S. exchanges, including requiring certification that...

In China, rural rich get richer and poor get poorer

Business editor - 04/02/2018
0
The New York Times reports that cash-strapped Chinese aviation and shipping conglomerate HNA Group is appealing to its own employees for financial assistance to cope with...