The United States and China will work together to get nuclear-armed North Korea take “a different course”, U.S. Secretary of State Rex Tillerson said on Saturday, softening previous criticism of Beijing after talks with his Chinese counterpart.

China has been irritated at being repeatedly told by Washington to rein in North Korea’s surging nuclear and ballistic missile programmes, one of a series of hurdles in ties between the world’s two largest economies.

But Chinese Foreign Minister Wang Yi described the talks with Tillerson as “candid, pragmatic and productive”. The two sides appeared to have made some progress or put aside differences on difficult issues, at least in advance of a planned summit between Chinese President Xi Jinping and U.S. President Donald Trump.

On Friday, Tillerson issued the Trump administration’s starkest warning yet to North Korea, saying in Seoul that a military response would be “on the table” if Pyongyang took action to threaten South Korean and U.S. forces.

Tillerson took a softer line after the meeting with Wang. He told reporters both China and the United States noted efforts over the last two decades had not succeeded in curbing the threat posed by North Korea’s weapons programmes.

“We share a common view and a sense that tensions on the peninsula are quite high right now and that things have reached a rather dangerous level, and we’ve committed ourselves to doing everything we can to prevent any type of conflict from breaking out,” Tillerson said.

He said Wang and he agreed to work together to persuade North Korea “make a course correction and move away from the development of their nuclear weapons.”

Wang said U.N. resolutions on North Korea both mapped out sanctions and called for efforts to resume efforts for a negotiated settlement.

“No matter what happens, we have to stay committed to diplomatic means as a way to seek peaceful settlement,” he said.

Wang said he and Tillerson “both hope to find ways to restart the talks”. 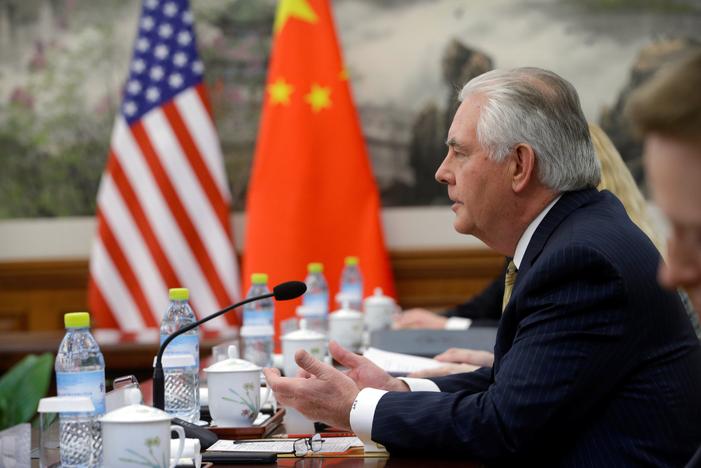 Tillerson had said on Friday that any talks on North Korea could only take place after it began the process of unwinding its weapons programmes.

A U.S. official had told Reuters in Washington earlier this week that Tillerson may raise the prospect of imposing “secondary sanctions” on Chinese banks and other firms doing business with North Korea in defiance of U.N. sanctions.

Trump said in a tweet on Friday that North Korea was “behaving very badly” and accused China, Pyongyang’s neighbour and only major ally, of doing little to resolve the crisis.

However, the two sides appear to have toned down differences as they work on finalising a trip by Xi to the United States, possibly next month, for his first summit with Trump.

Wang said the two countries were in “close communication” on arranging the meeting, but gave no details.

The state-run Chinese tabloid the Global Times said on Saturday that it was in China’s interests to stop North Korea’s nuclear ambitions but to suggest China cut the country off completely was ridiculous as it would be fraught with danger.

“Once there is chaos in North Korea, it would first bring disaster to China. I’m sorry, but the United States and South Korea don’t have the right to demand this of China,” it said in an editorial.

A former oil executive with no prior diplomatic experience, Tillerson will meet Xi on Sunday.

North Korea has conducted two nuclear tests and a series of missile launches since the beginning of last year.

Last week, it launched four more ballistic missiles and is working to develop nuclear-tipped missiles that can reach the United States.

Washington has been pressing Beijing to do more to stop North Korea’s nuclear and missile programmes.

China has also been infuriated by the deployment of the THAAD, or Terminal High Altitude Area Defense, missile defence system in South Korea, which it says will both harm China’s own security and do nothing to ease tensions.

China says the system’s powerful radar will extend into the country’s northeast and potentially track Chinese missile launches, and maybe even intercept them. Russia also opposes THAAD, for the same reasons.

There are other tricky issues too, including the self-ruled island of Taiwan which China claims as its own.

The Trump administration is crafting a big new arms package for Taiwan that could include advanced rocket systems and anti-ship missiles to defend against China, U.S. officials said, a deal sure to anger Beijing.

Wang said Saturday’s talks included discussions on THAAD and Taiwan but did not give details.

By Yeganeh Torbati and Ben Blanchard

Chinese across the world celebrating the Lunar New Year

Military editor - 12/09/2018
0
Hundreds of thousands Russian troops swept across Siberia on Tuesday in the nation’s largest ever war games also joined by China — a powerful...

Art & Entertainment editor - 12/05/2018
0
The European Broadcasting Union has cut ties with China's MangoTV, after the broadcaster censored acts and blurred out rainbow flags in the audience. Contestants from...

Business editor - 16/02/2017
0
Didi and Uber’s billion-dollar merger completed last August was assumed to have finally settled the ride-hailing war with Didi as the sole dominator in...

Pandora Box: hope for the Chinese towards the goal of the Himalayas

Guo Wengui editor - 04/01/2019
0
(Continued.) Looking back into the nearly on hundred years of Chinese Communist Party (CCP) and 70 years of its governance in China, we can see...

The hazards of China’s global ambitions

Trump-Xi Summit’s Top Accomplishment: Getting to Know Each Other

Politics editor - 08/04/2017
0
U.S. officials said President Donald Trump’s first meeting with Chinese President Xi Jinping this week was an opportunity for the leaders of the world’s...

News editor - 21/03/2019
0
China urged the United States on Thursday not to allow Taiwan President Tsai Ing-wen to stop over in Hawaii next week when she makes...

On March 1st, the tariff on China goes to 25 percent, says Donald Trump

Politics editor - 28/09/2017
0
Change is under way at the top of China’s People’s Liberation Army, while the once all-powerful Communist Youth League ­faction is being hollowed out. Such...

At this Chinese school, Big Brother was watching students — and charting every smile...

Education editor - 01/07/2018
0
At first, it just seemed cool. When facial recognition cameras were installed at a century-old high school here in eastern China, students got in and...

Business editor - 24/05/2020
0
China's search tech giant Baidu is considering delisting from the Nasdaq exchange as it deems its stock to be undervalued, according to a Reuters report Thursday. The...

Politics editor - 02/08/2017
0
The White House is preparing to open a broad investigation into China's trade practices, according to people with knowledge of the Trump administration's plans,...

xinjiang editor - 04/12/2019
0
The US House of Representatives has overwhelmingly approved a bill that would require the Trump administration to toughen its response to China's crackdown on...

Guo Wengui editor - 07/02/2019
0
On February 6 in New York, when asked by Sara whether the US Department of Justice would charge and prosecute those American individuals in...