Home Politics As Trump woos China’s Xi, Dalai Lama has to wait on the...
Share on Facebook
Tweet on Twitter
When Donald Trump was elected in November, the Dalai Lama said he was keen to meet the incoming U.S. president, but since then Trump has cozied up to China’s leader Xi Jinping, making it less likely the man Beijing deems a separatist will get an invite to the White House anytime soon.

The United States has long recognised Tibet as part of the People’s Republic of China, and does not back Tibetan independence. But that has not deterred all the recent U.S. presidents before Trump from meeting the exiled Tibetan spiritual leader.

The United States is widely seen as the last major Western power that has still held meetings with the Dalai Lama despite Beijing’s objections that such encounters foment separatism.

In past meetings, the U.S. had consistently voiced support for the protection of human rights of Tibetans in China, and called for formal talks between Beijing and the Dalai Lama and his representatives.

At a regular press briefing in Beijing on Friday, China’s foreign ministry spokesman Geng Shuang reiterated that China resolutely opposes any foreign country allowing the Dalai Lama to visit or any foreign official having any form of exchange with him. He did not say whether China had specifically requested Trump not meet the Dalai Lama.

A U.S. State Department spokeswoman and a White House official referred Reuters to the Dalai Lama’s office when asked whether the Tibetan spiritual leader and his representatives had asked for a meeting with Trump and whether any such meetings were planned.

“His Holiness was supposed to go (to the U.S.) in April, but it was postponed,” Lobsang Sangay, head of the Tibetan government-in-exile, told Reuters.

That trip has been delayed until June due to a hectic schedule in the preceding months that had left the Dalai Lama physically exhausted, Sangay said, adding that Washington D.C. wouldn’t be part of the June itinerary.

The office of the Dalai Lama hasn’t reached out to Trump to arrange a meeting yet, he said. 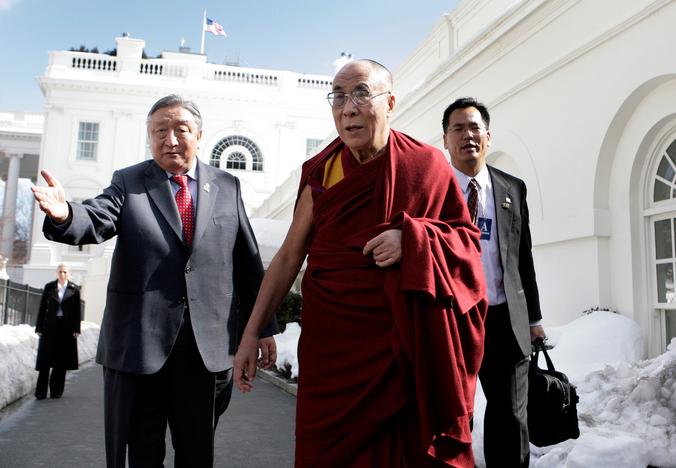 The Dalai Lama is taking a more considered approach with regard to any meeting with Trump, said a source with knowledge of the thinking of the winner of the 1989 Nobel Peace Prize.

The unpredictable U.S. president upset protocol in December when weeks before being sworn into office he took a telephone call from the leader of self-ruled Taiwan, which China regards as a renegade province, only to last week rebuff Taiwanese suggestions of another call.

In the interim, Trump has met and phoned Xi, and says he has built a strong relationship with the Chinese leader.

He called Xi “a friend of mine” who was “doing an amazing job as a leader” in an interview with Reuters last week, and praised him for trying to rein in nuclear-armed North Korea. In return, the Chinese president has invited Trump to visit China this year.

In mid-2008, then British Prime Minister Gordon Brown met the Dalai Lama, to the anger of Beijing. Months later, the British Foreign Secretary at that time David Miliband ditched Britain’s near century-long position on Tibet, describing it as an “anachronism”, and explicitly recognised Tibet as part of China.

Based on treaties signed at the turn of the 20th century by British-administered India and Tibet, Britain had previously said it would recognise China’s “special position” in Tibet on the condition that Tibet was given significant autonomy.

Chinese troops took control of Tibet in 1950 in what Beijing calls a “peaceful liberation”. Nine years later, the Dalai Lama fled to India after an abortive uprising and set up a government in exile, which China does not recognise.

China sees the Dalai Lama as a dangerous separatist in a monk’s robes, even though the Dalai Lama says he wants autonomy for his homeland, not outright independence. There have been no formal talks between Beijing and the Dalai Lama’s representatives since 2010.

International rights groups and exiles say China stamps on the religious and cultural rights of Tibetans, accusations denied by Beijing. China says its rule has ended serfdom and brought prosperity to a once-backward trans-Himalayan region.

Trump has been silent on Tibetan issues.

“The main change is that the U.S. approach on Tibet seems likely to become more transactional and therefore less consistent,” said Robbie Barnett, director of the Modern Tibetan Studies Program at Columbia University.

“It seems set to become more a question of contingency, dependent on how he calculates his relationship with China at any one moment.”

Earlier this week, Democratic U.S. Representative Jim McGovern of Massachusetts called for a new U.S. policy towards Tibet to safeguard the identity of the Tibetan people and hold China accountable for human rights abuses.

The Dalai Lama will next week receive a U.S. Congressional delegation led by House Democratic Leader Nancy Pelosi at his base in northern India, his government-in-exile, the Central Tibetan Administration, said on Friday. The visit represents a bipartisan gesture of support that is likely to rile Beijing.

The prime minister of the government-in-exile said he is still hopeful that the United States will continue to support Tibetan issues and push for talks between the Dalai Lama’s representatives and Beijing.

But he said they were prepared for any upsets.

“We are Buddhists, we believe in impermanence. You just go with your karma and whatever happens, happens, because we have seen the worst, the occupation of our country,” said Sangay, who is planning a trip to Washington at the end of May.

China’s disappeared: a look at who went missing in 2018

human rights editor - 30/12/2018
0
It's not uncommon for individuals who speak out against the government to disappear in China, but the scope of the "disappeared" has expanded since...

Declaration of the New Federal State of China

Economic and trade agreement between US and China: full Text

trade war editor - 16/01/2020
0
Economic and Trade Agreement between the United States of America and the People's Republic of China Phase One Signed at the White House on January 15,...

Trade editor - 04/09/2017
0
Late Sunday morning, President Trump tweeted an extraordinary statement. “The United States” he announced, “is considering, in addition to other options, stopping all trade with any...

Guo Wengui editor - 13/05/2021
0
Today is May 12. Greetings, honored fellow fighters. Has everybody noticed that the world is discussing only the CCP virus and nothing else?  That’s it...

Stand up firm for Donald Trump against the forces of evil

World editor - 26/10/2018
0
The US midterm elections are all about Donald Trump, the man who's not on the ballot. A majority of those surveyed (by USA Today)...

China to allow some drugs based on foreign approvals

Society editor - 09/10/2017
0
China will allow use of some drugs and medical devices based on approval by foreign regulators, the government said Monday, in a move that...

Politics editor - 09/09/2017
0
China’s military is preparing a sweeping leadership reshuffle, dropping top generals, including two that sources say are under investigation for corruption. The changes would make...

human rights editor - 08/02/2017
0
By Shan Juan A 10-year reform that has shaken off China's dependence on executed inmates as the primary source for transplant organs has brought the...

Guo Wengui editor - 08/07/2019
0
Mr. Wenzheng and all fellow Taiwanese, all the deals between Communist China and America are bad for Taiwan. But Taiwan should stand out with...

Tech editor - 17/05/2017
0
BEIJING, May 16 (Xinhua) -- A widespread ransomware cyberattack that has affected about 150 countries worldwide appeared to slow down over the weekend, but...