Tens of thousands of people hit Hong Kong’s streets on Sunday to protest against a government plan to allow extraditions to mainland China, the crowds swollen by anger over the recent jailing of democracy leaders.

The extradition proposal has already sparked large protests and mounting alarm within the city’s business and legal communities who fear it will hammer the financial hub’s international appeal and tangle people up in China’s opaque courts.

But Sunday’s protest was one of the biggest in the city in recent years.

The demonstration comes just days after four prominent leaders of Hong Kong’s democracy movement were jailed for their role in organising mass pro-democracy protests in 2014 that brought parts of the city to a standstill for months.

Demonstrators on Sunday chanted “Step down, Carrie Lam!” — referring to the city’s pro-Beijing leader, while many held the yellow umbrellas that symbolised the 2014 rallies.

Fanly Leung, an accountant, told AFP it was “heartbreaking” to see the activists jailed earlier this week.

“They are professors, highly knowledgable people contributing to society… They could have had a comfortable life making money and not suffer like this. It’s not right to jail these good people,” said Leung, 61. 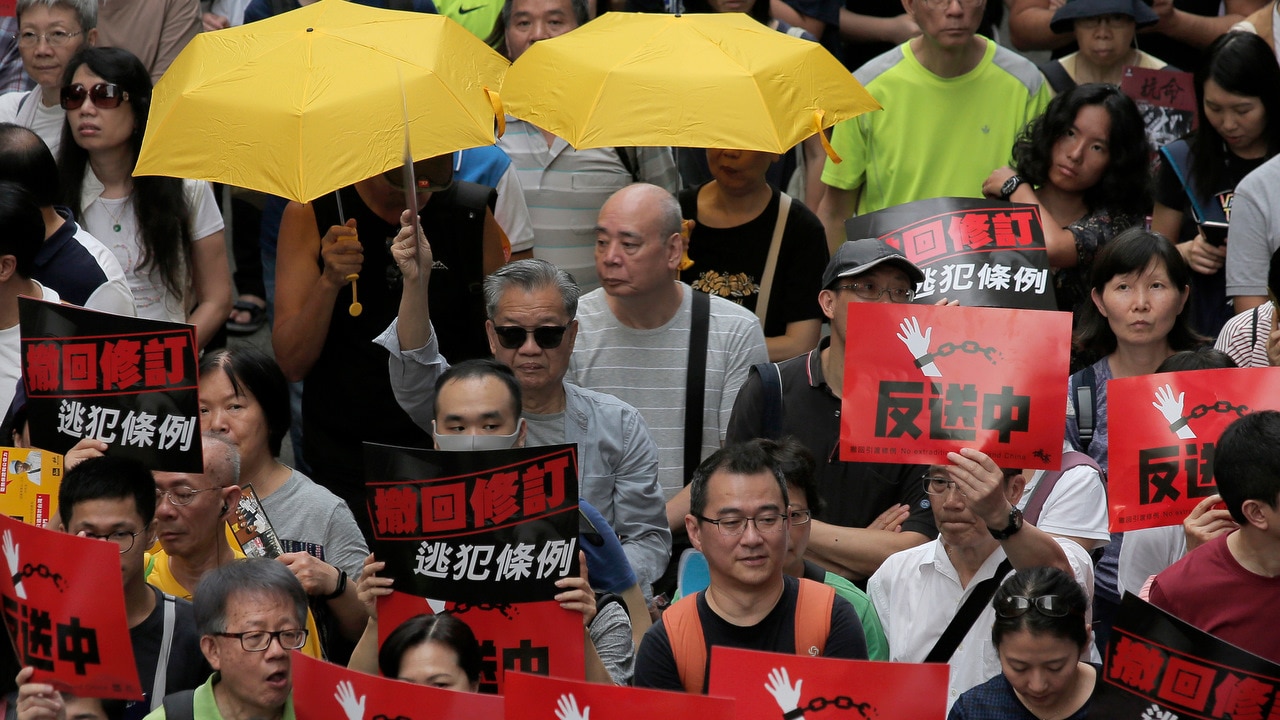 Thousands of protesters march along a downtown street to against the extradition law in Hong Kong. AAP

Zoe Yuen, 20, came with her mother who became politically active since the 2014 Umbrella Movement protests.

“At least we have done what we should do and can tell the next generation that although we may not get what we want, at least we have resisted,” the university student told AFP.

Some protesters dressed up as Chinese mainland police officers guarding another demonstrator standing behind a portable red cage.

One held up a sign that said: “President Xi Jinping, no legalised kidnapping of Hong Kong people to China”. Police said some 22,000 turned out, their highest estimate since the 2014 protests. Organisers have yet to give their estimates which are usually far higher.

Hong Kong has a separate legal system through the “one country, two systems” deal struck between Britain and China.

Historically the city has baulked at mainland extraditions because of the opacity of China’s criminal justice system and its liberal use of the death penalty.

But earlier this year Hong Kong’s government announced plans to overhaul its extradition rules, allowing the transfer of fugitives with mainland China, Macau and Taiwan on a “case-basis” for the first time.

Chris Patten, the last British governor of Hong Kong, became the latest figure to criticise the extradition proposal ahead of Sunday’s protest.

“Societies which believe in the rule of law do not reach agreements like this with those who do not. These changes are an assault on Hong Kong’s values, stability and security,” he said.

Me the only God, who dares to provoke me?

Guo Wengui editor - 03/10/2019
0
"Me and me only," these four words are the clear message we have heard from Xi Jinping's speech at this 70 years anniversary celebration. Back...

corruption editor - 19/05/2019
0
Former China Securities Regulatory Commission (CSRC) Chief Liu Shiyu has turned himself in while being put under corruption investigation, according to Caixin. Liu has been...

Uncategorized editor - 20/06/2017
0
China’s fourth attempt at cracking into MSCI Inc.’s benchmark share indexes comes with its best chance of success -- and the least at stake. In...

Society editor - 11/08/2017
0
A passenger coach has crashed into the wall of a expressway tunnel in China, killing at least 36 people and injuring 13, state media...

News editor - 17/05/2019
0
Zhong Sheng has been very active these days on the People’s Daily accusing the U.S. of undermining the trade talks and inciting patriotism among...

Society editor - 11/10/2019
0
Artificial intelligence incorporated in facial, voice, and numerous other bio-metrics can be deadly. It is able to scan, locate, track, hunt, quarantine, arrest, and...

chinese society editor - 29/12/2019
0
Hong Kong protests has opened up the gate for burial of the CCP regime Over six months’ protests against the Extradition Bill have caught world attention with the courageous Hong Kongers fighting continuously for freedom and democracy. The...

Miles Kwok on Taiwan, Hong Kong, Xinjiang and Tibet and what follows by US...

Guo Wengui editor - 15/11/2018
1
In his whistle-blow earlier this week, Chinese tycoon Miles Kwok talks about Taiwan, Hong Kong, Xinjiang and Tibet, and his preparation for the upcoming...

Why Miles Kwok is challenging the three richest men in China at this very...

Sports editor - 04/08/2017
0
WANT to protect yourself from the sun's harmful rays this summer? Well, you could always grab yourself one of these. The 'Face-Kini' as it has...

Guo Wengui editor - 19/07/2017
0
Six months ago, who would ever have imagined that social media would be able to bring upheaval to China’s leadership succession at the 19th Party...

News editor - 02/06/2021
0
China has announced that it will allow couples to have up to three children, after census data showed a steep decline in birth rates. China...