A Taiwanese democracy activist confessed Monday to charges of attempting to subvert Chinese government power during a trial in China that has been slammed by rights activists and further soured cross-strait relations.

A shaven-headed Lee appeared nervous as he confessed to charges of “subverting state power”, stating that he had written and distributed online articles that criticised China’s ruling Communist Party and promoted democracy among other topics.

“I know that my behaviour definitely violated Chinese law,” said Lee, an NGO worker who was arrested during a trip to the Chinese mainland in March.

“The television news I watched in prison has made me understand China’s development a little better. I know that my past thinking and the information I received was mistaken,” he said.

“This mistaken thinking led me to violate the law. I express my guilt and regrets.”

The articles were written at the direction of Peng, who he had become acquainted with online and had met several times on the Chinese mainland, Lee said under questioning from a prosecutor.

Lee’s supporters gathered outside the courthouse in Yueyang city, according to photos on social media.

His wife and mother arrived in Hunan province Sunday to attend the trial. Both women were accompanied by several officials from Taiwan’s semi-official Straits Exchange Foundation, which handles relations with the mainland.

Lee has long supported civil society organisations and activists in China, according to Amnesty International. 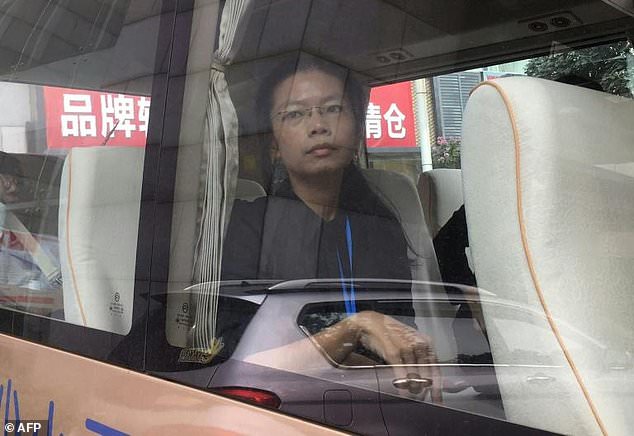 Lee’s wife arrived in Hunan Sunday to attend the trial, with several officials from Taiwan’s semi-official Straits Exchange Foundation, which handles relations with the mainland

He had shared “Taiwan’s democratic experiences” with his Chinese friends online for many years and often mailed books to them, said the Taiwan Association for Human Rights.

The language the two co-defendants used to confess their crimes sounded rehearsed, according to Patrick Poon, a China researcher at Amnesty International.

The “language they used was so much like the Chinese government’s”, he said, adding he was particularly surprised by Lee’s criticisms of Taiwanese media.

“It’s a sham trial,” he said, adding that “there is no way that the trial was a fair trial according to international standards.”

In the lead-up the trial, Beijing repeatedly ignored Taipei’s requests for information on Lee’s whereabouts and details of the allegations against him. Even Lee’s family was not given written notification of the trial, Poon said.

Relations between the two sides have worsened since Taiwanese President Tsai Ing-wen took office in May last year. Since then Beijing has cut off all official communications with Taipei.

China sees self-ruled Taiwan as part of its territory waiting to be reunified. It wants Tsai to acknowledge the island is part of “One China”, which she has refused to do.