The Dow Jones stock index dropped 200 points on Tuesday after Donald Trump said he was not satisfied with US-China trade talks and cast doubt on whether a summit with North Korea, scheduled for 12 Jun in Singapore, will in fact take place.

The losses, which came after a 300-point gain a day earlier on optimism that a trade war had been at least temporarily averted, came amid growing signs of discord within the US negotiating team. 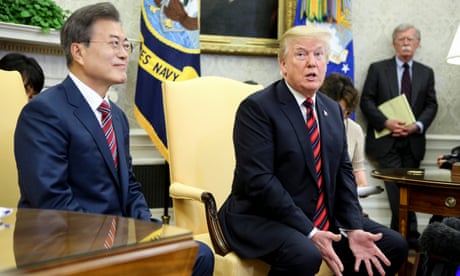 At a White House meeting with South Korean president Moon Jae-in, Trump was asked if he was pleased with the China trade talks. “No, not really,” he remarked. Though, he added, “they’re a start”.

The divisions are now publicly surfacing as outright contradictions in official statements and well-informed leaks, sometimes made almost contemporaneously.

On Monday, the president denied that US trade negotiators had made a deal with China over ZTE Corp, the controversial Chinese telecoms maker that has admitted to violating American sanctions on Iran and North Korea.

“There is no deal,” Trump told reporters. “We’ll see what happens.”

Trump’s comments are only the latest sign of poor coordination, if not outright discord, within the US negotiating positions in the Chinese trade dispute.

On Tuesday, Mnuchin told a Senate panel that US tariffs on Chinese steel and aluminum imports will stay in place while negotiators put a potential trade war “on hold”.

“Those were not part of our discussions,” Mnuchin said, in apparent contradiction of earlier administration indications that the US was prepared to discuss all the trade issues tabled during the escalating dispute.

Inconsistencies in the US position were also evident over the weekend, as US trade representative Robert Lighthizer warned China that the Trump administration might yet impose tariffs, just hours after Mnuchin’s statement that the US would hold off on tariffs while negotiations continued.

“The president can always put tariffs back on,” Mnuchin chimed in again on Monday.

That pattern was also repeated last week when Kudlow said China had offered to reduce its trade surplus with the United States by $200bn. But the Chinese foreign ministry denied that a deal was in place and the state-run People’s Daily labeled the reports “a misunderstanding”.

The figure was notably omitted from Saturday’s joint communique. On Sunday, Mnuchin said that the administration put its trade war with China “on hold” and Kudlow conceded: “Maybe I got ahead of the curve.”

The Chinese reportedly indicated they cannot be certain that whatever agreement they may reach with Mnuchin would ultimately hold.

“Given the increasing interaction between the two countries, we cannot assure you they will not encounter more frictions or disputes in the future,” advised Chinese foreign ministry spokesman Lu Kang, at a briefing.

Even the vague communique appeared to highlight divisions between Mnuchin, who is primarily interested in addressing the US $337bn trade deficit with China, and Lighthizer’s focus on technology transfers.

“Getting China to open its market to more US exports is significant,” Lighthizer said on Sunday. “But the far more important issues revolve around forced technology transfers, cyber theft and the protection of our innovation.”

The fourth member of the US negotiating team, commerce secretary
Wilbur Ross, has also had his share of problems. Last summer he was sharply contradicted by Trump after he attempted to strike a deal with China to reduce its steel production capacity.

On Tuesday, Bloomberg reported that discord over a China strategy was behind the administration’s decision to put the imposition of tariffs on hold.

That prompted former chief strategist and China hawk Steven Bannon to complain in a Bloomberg interview that the president had “changed the dynamic regarding China but in one weekend Secretary Mnuchin has given it away”.

Bannon accused Mnuchin of “completely misread the geopolitical, military and historical precedents, and what President Trump had done was finally put the Chinese on their back heels”.

Reports, since denied by Trump, that the US was close to easing penalties against ZTE Corp and allowing the Chinese company to resume buying US components, was also criticized by lawmakers.

Florida senator Marco Rubio accused the administration of being out-negotiated by China and accused it of giving ZTE a deal without giving up anything meaningful in return.

Rubio tweeted on Tuesday: “Can’t emphasize enough what a crisis this is. #China is buying & often stealing the next-generation software that powers our military & is at core of our economy. We need to wake up before it is too late.”

By Edward Helmore
The Guardian

U.S.-China trade war is now becoming a currency war, too

Money editor - 23/07/2018
0
President Trump is laying into China and the European Union as currency manipulators, accusing them in a tweet last Friday of "manipulating their currencies and interest...

Military editor - 13/11/2019
0
The idea of killer robots is terrible enough. But what happens when their cold lethality is added to the volatile political and religious mix...

Military editor - 28/03/2021
0
Chinese President Xi Jinping has instructed the armed police to intensify military training and combat readiness to enhance the capabilities to fulfill missions and...

hong kong editor - 03/10/2020
0
On the Arrests of Hong Kong Protestors We are outraged at the Hong Kong government’s arbitrary arrest of more than 80 people on October 1. ...

Tech editor - 28/07/2017
0
A Chinese language learning startup that specialises in AI and has 45 million registered students has secured US$100 million in funding to help it...

Society editor - 14/09/2020
0
A Chinese virologist who has alleged that COVID-19 was human-made in a lab in China released a report on Monday that she says backs up her...

Himalayan standoff illustrates the bad blood between India and China

World editor - 18/08/2017
0
As India’s Himalayan border standoff with China enters its third month, one thing has become glaringly obvious: Beijing has no intention of treating New...

taiwan editor - 30/08/2020
0
Against Beijing's strong objections, an official delegation from the Czech Republic, headed by Senate President Miloš Vystrčil, arrived in Taiwan Sunday on a six-day...

hangzhou editor - 28/05/2019
0
ZHENGZHOU, China (Reuters) - For the last decade, the city of Zhengzhou has been getting a taste of the Chinese dream. Fueled by investment, including...

Miles Guo warns about the CCP’s plan to block the Strait of Hormuz &...

human rights editor - 04/07/2017
0
China's latest maneuver in a sweeping crackdown on internet content has sent a chill through a diverse community of filmmakers, bloggers, media and educators...