Twenty years after its handover to China, the struggle for civil liberties and equality in Hong Kong was yet again thrust into the spotlight when 16 prominent activists were jailed last week.

The Department of Justice had successfully appealed an original ruling mandating community service and suspended sentences. Justice Secretary Rimsky Yuen SC, who initiated the appeal, said the original sentences had been too lenient to create deterrence, arguing that the magistrate had made a “fundamental mistake” in judging that the nobleness of the activists’ cause outweighed the risk of violence involved in the unlawful assembly.

The response to the arrests signals what some say could be a stronger support for anti-establishment movements going forward.

Thirteen of the activists were sentenced to eight to 13 months in prison for storming a Legislative Council financial committee meeting in an attempt to block the government’s development plans for the New Territories area. They believed that the plan had not been democratically deliberated, strengthened the hegemony of large real estate developers, and would displace indigenous residents and destroy farmland.

Mr. Law, Demosistō’s chair, became the youngest-ever lawmaker in the history of Hong Kong when he was elected to the Legislative Council at 23. Both were convicted of inciting illegal assembly in front of the government headquarters – an area popularly known as the Civic Square. These events set off the 2014 Umbrella Movement during which more than 100,000 protesters occupied important government and business districts for 79 days. Because their sentences exceed three months, both men will be barred from running for elections in the next five years.

In response to the arrests, protesters turned out in force on August 20 to show their support for the activists and disaffection with the government’s handling of dissent. Organisers claimed that the rally was the biggest since the Umbrella Movement. Even the more conservative police estimate of 22,000 people puts the tally higher than the annual pro-democracy rally.

Participants’ placards and social media posts were awash with accusations that the integrity of the justice system had been compromised and the rule of law eroded. Many also suspect that the prosecution and imprisonment of the activists were politically motivated, pursued by the government only to suppress dissent from the most vocal groups demanding reforms.

Ann Lee, a university student who participated in the protest, told local media the government’s efforts to overturn the previous sentences were “attempts to intimidate us from taking part in acts of resistance.” Carrying a sign that read ‘one prisoner of conscience is one too many’, another protester, said, “I came today because this is a clear case of the legal system being used to threaten voices that support justice – opposition voices.”

This view is echoed by many, including veteran observer of Hong Kong politics Tim Hamlett, who described the court ruling against the activists as an opinion piece. Citing the strong language used in the document, which condemned activists for being “arrogant and self-righteous” and creating an “unhealthy trend”, he criticised the judges’ lack of impartiality.

This outpouring of condemnation seems to signal a shift in the wider public’s attitude towards socio-political activism and the government’s handling of political opposition.

Whereas most members of the public criticised participants in the Umbrella Movement in 2014, denouncing them for disrupting the economy and public order or radicalising the youth, Hong Kongers are now rallying in much greater numbers behind the activists.

This may be attributed to what observers have described as heightened levels of disenchantment among large parts of Hong Kong’s society. “As a young person, I feel quite hopeless at the moment,” said one student who added that he was protesting because “the government has destroyed the political futures of these young people… extinguishing the voices of the pan-democrats and those who want autonomy.”

A belief that the government has overstepped its power and effectively given the police arbitrary power may be another reason that explains the strong support for the jailed activists. Joseph Zen SDB, the former bishop of Hong Kong, believes the justice system has become a political instrument due to the court’s inconsistent interpretation of violence. The Umbrella Movement “was peaceful, did not injure anyone or damage any property. On the contrary, the detention of the Umbrella Movement protesters by the police for 40 hours, during which they were denied water or toilet breaks is ‘real violence’.”

Edward Leung, spokesperson of separatist group Hong Kong Indigenous, says he felt empowered by the masses, who, “despite their different strategies and ideologies during the whole struggle, saw that standing in solidarity and showing the government we are not really afraid is the most important thing.” Even the older generation, which has traditionally been critical of those pushing for social change, took part in the protest. Jackson Wai, a retired teacher in his 70s, teared up as he bemoaned, “these young people are our hope for the future. We shouldn’t treat them like this.”

The Trust of the People

Hong Kong government officials roundly rejected claims that the court’s decision was political motivated. Newly elected Chief Executive Carrie Lam called the claims “groundless” and “irresponsible”, stating that such attacks may have an adverse impact on the independence of the judiciary and the rule of law, damaging Hong Kong’s prosperity. “However noble your ideals may be, you need to fight for it by legal and reasonable means, in a lawful, peaceful and rational way that does not affect other residents,” Ms. Lam said at a press conference.

Ms. Lam entered office at a time of growing mistrust between large parts of the population and the government. Hong Kong’s chief executive is elected by a committee of 1,200 people, many of them with strong ties to Beijing; Hong Kong’s population is 7.3 million people. Previous administrations largely refrained from engaging with opposition voices, routinely shifting the burden of managing dissent to the justice system.

The development plan for the New Territories is a case in point: after months of protests and sit-ins, imploring the government to make the planning process more democratic and build affordable housing, the activists now sentenced to jail were arrested with no formal dialogue or consultation process initiated.

“Those who are in power say that they want society to reconcile, but then they do these things to provoke the public,” rued Anthony Wong, a well-known Cantopop singer and activist. He told Hong Kong Free Press, the government “really has to work extra hard to regain the trust of the people, especially the younger generation. Otherwise, society will be even more fractured.” 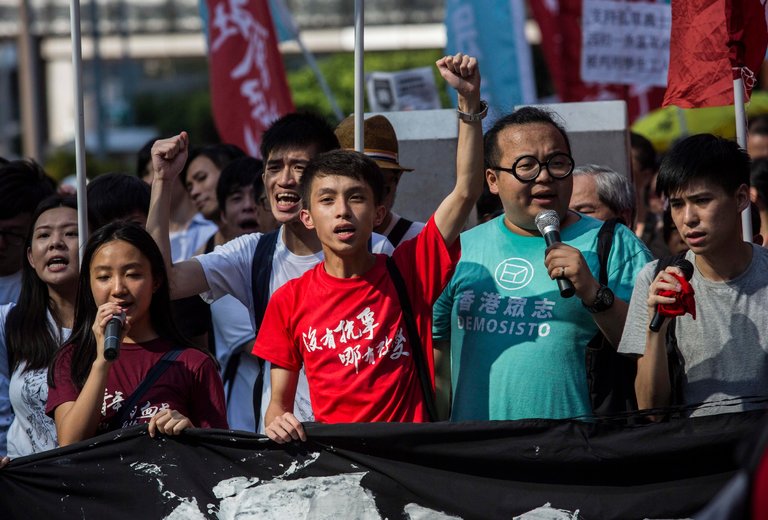 Lifestyle editor - 13/06/2020
0
The video conferencing company Zoom admitted Thursday that it took action against pro-democracy activists in Hong Kong and the U.S. to appease the Chinese...

xinjiang editor - 21/07/2020
0
The Department of Commerce's Bureau of Industry and Security (BIS) added to the Entity List 11 Chinese companies implicated in human rights violations and...

World editor - 10/09/2017
0
It’s been a busy week for China as the country builds momentum, influencing a greater share of international trade and doing business with more...

chinese communist party editor - 23/09/2020
0
Chinese President Xi Jinping on Tuesday delivered a speech via video link at the annual General Debate of the 75th session of the United...

hong kong editor - 20/10/2019
0
Over one million Hong Kongers have turned out onto the streets in protest of the CCP's brutality and violations besides the Five Demands, once...

China Tells Entrepreneurs They Must Put Patriotism Over Profit

Business editor - 26/09/2017
0
China said patriotism must be the highest priority in entrepreneurship, officially defining for the first time what the concept should mean for the world’s second-biggest economy. Patriotism...

China Regulators Plan to Crack Down Further on Overseas Deals

Money editor - 04/08/2017
0
China plans to further tighten the screws on overseas acquisitions by Chinese companies and borrowing to fund those transactions, and has started closely scrutinizing...

The second wave of coronavirus in Wuhan can be more deadly

human rights editor - 08/02/2017
0
By Shan Juan A 10-year reform that has shaken off China's dependence on executed inmates as the primary source for transplant organs has brought the...

human rights editor - 06/08/2017
0
The president of the Tibetan government-in-exile called on the Australian government to lobby for full Tibetan autonomy in China. Dr Lobsang Sangay is set to make a...

After ‘highly successful meeting,’ U.S. and China agree to new talks and hold off...

hong kong editor - 30/07/2019
0
Unprecedented rally is scheduled in all areas of Hong Kong by protesters from all walks of life. The following posters show the agenda. July 30:...

Military editor - 12/09/2018
0
Hundreds of thousands Russian troops swept across Siberia on Tuesday in the nation’s largest ever war games also joined by China — a powerful...

Outrage as a bus-load of Chinese tourists is driven to Grenfell Tower to take...

Travel editor - 29/09/2017
0
A Chinese tour guide has sparked outrage after bringing a group of tourists to take pictures of Grenfell Tower. The unauthorised visit saw a bus-load...

Society editor - 17/02/2018
0
The Chinese Government has launched a large-scale "people's war" against organised crime, as well as the industries and regions most affected by it. Key points: ...