Residents take the street in Daqing despite warnings from the authorities

Fearing pollution, hundreds of residents in a northeastern Chinese city protested on Tuesday against the construction of an aluminium processing plant, ignoring warnings from authorities against disturbing social order.

Tens of thousands of “mass incidents” – the usual euphemism for protests – take place each year in China, triggered by corruption, pollution, illegal land grabs and other grievances.

In Daqing, residents took part in a protest against the planned building of an aluminium plant by a subsidiary of Zhongwang Holdings.

Photos and videos of a large crowd gathering in the car park outside the city government were circulated on Weibo on Tuesday, along with a hashtag asking Zhongwang to “please leave Daqing”.

Reuters could not independently verify the accuracy of the pictures. Two eyewitnesses confirmed the protests had taken place.

“There are about 800 to 1,000 people protesting still against the aluminium plant,” said one eyewitness who gave his family name as Zhang, speaking by telephone from Daqing.

The protests took place despite a call by city officials for residents to “rationally” convey demands, warning that “illegal gatherings, defamation, rumours and other acts that disrupt social order” would be dealt by law.

“Everyone please be assured, if Daqing Zhongwang Aluminium’s project does not pass muster on environmental issues, then it absolutely will not advance further,” the city government said in a post late Monday on its official microblog. 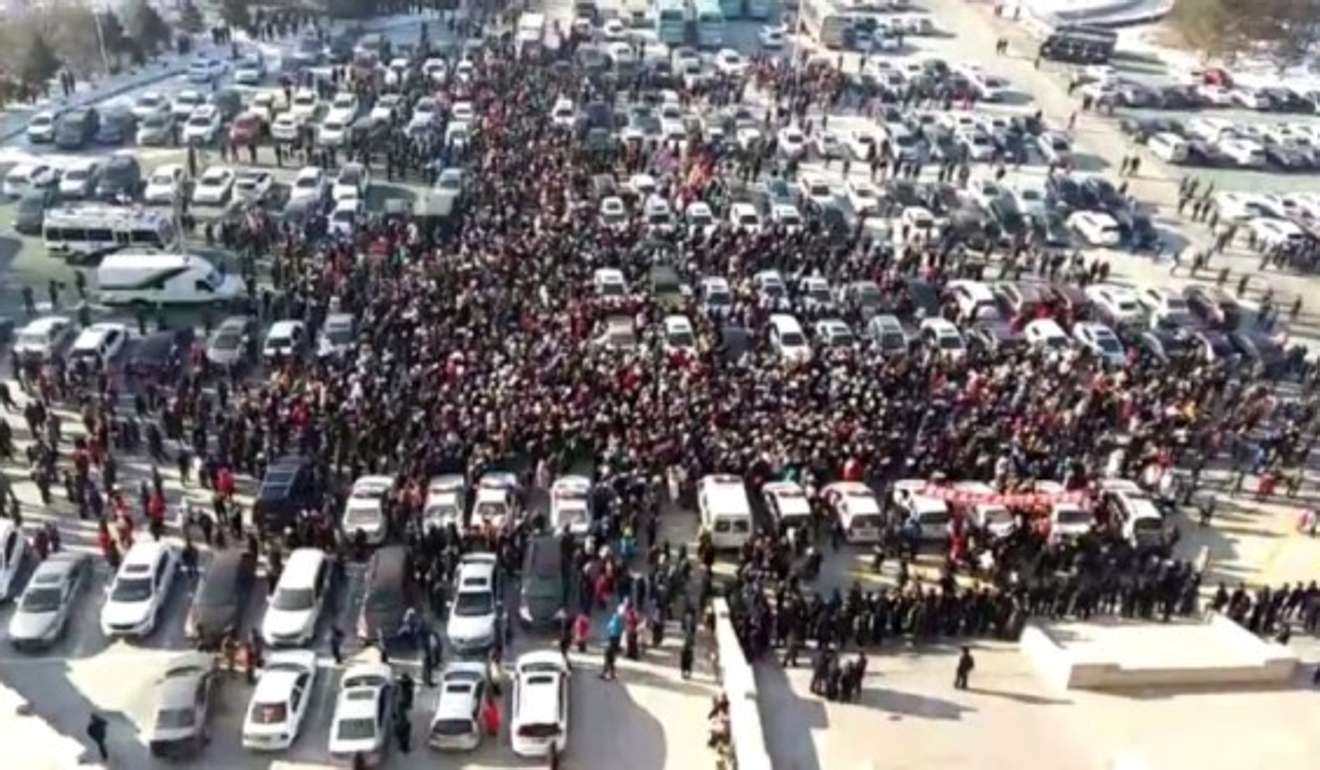 Public concern about pollution from the plant would be met with a “scientific” assessment of the plant’s environmental impact, the post said.

A woman who answered the phone at the Daqing police hotline said residents worried about possible pollution protested in front of the Daqing government building Tuesday morning against the project, and dispersed in the afternoon. She refused to identify herself.

“Everyone in Daqing is against the project,” she said.

A spokeswoman for Zhongwang Holdings said the company was surprised by the protests and did not know why residents were opposing the project now.

The company bought the land five years ago but building has not yet started, with a feasibility study still under way.

“We’re still having internal discussions on the next step and will keep an open dialogue with the government and people there,” she said, adding environmental protection was a “priority” for the company.

The protests come as the company, one of the world’s top aluminium fabricators, is embroiled in a dispute over US import duties and subsidiary Zhongwang International Group pursues a US$2.3 billion takeover of US aluminium products maker Aleris Corp.

US lawmakers have called on regulators to reject the takeover.

The Daqing city government in frigid Heilongjiang province did not answer calls seeking comment. An official reached by telephone at the Daqing police declined to comment.

Society editor - 09/09/2017
0
‘Javanka’ fans across China had been counting the days until the power couple’s arrival. “They’re a role model couple ... highly motivated and positive. That’s what lifts...

Striking before and after footage shows how a deadly earthquake destroyed China’s top scenic...

Society editor - 11/08/2017
0
The 7.0 magnitude earthquake rocked China's Sichuan province on the evening of August 8 At least 20 people have been pronounced dead with...

Social media editor - 18/05/2017
0
There are now more people using Sina Weibo, the Chinese micro-blogging platform, than there are using Twitter. According to the Chinese company's first quarter results,...

Politics editor - 25/08/2017
0
President Xi Jinping appointed one of China’s few top generals with combat experience to a powerful military post, according to two people familiar with...

World editor - 14/12/2017
0
Anthony Kpandu took a delegation from his party, the Sudan People’s Liberation Movement (SPLM), to China last year to train with the Chinese Communist...

Australian Defence files to be moved out of privately owned data hub after Chinese...

Politics editor - 20/06/2017
0
The Defence Department of Australia will terminate its relationship with a Sydney data centre in 2020 and move its secret files back into a...

Military editor - 21/12/2020
0
An aircraft carrier group led by China’s newest carrier, the Shandong, sailed through the Taiwan Strait on its way to routine drills in the...

World editor - 22/03/2022
0
China has already decided to provide Russia with economic and financial support during its war on Ukraine and is contemplating sending military supplies such as armed drones, US officials fear.

US china editor - 20/08/2020
0
Peter Navarro, director of the Office of Trade and Manufacturing Policy, reaffirmed that the coronavirus had been created by the Chinese Communist Party when...

World editor - 28/01/2019
0
As Venezuela continues its slide into chaos, the nation's self-proclaimed interim president says his movement to oust President Nicolas Maduro is gaining momentum and...

Views vary over whether Scaramucci’s sale of SkyBridge to a Chinese conglomerate poses a...

Business editor - 29/07/2017
0
That’s Meredith McGehee, chief of policy and strategy at Issue One, a nonpartisan organization that seeks to reduce the influence of money in politics...

Guo Wengui editor - 16/11/2019
0
Dear warrior friends! Today is October 16 and I am having a live broadcast for peace. Before I go into the developments in Hong Kong,...

Business editor - 19/12/2017
0
In recent years, the Chinese economy has become a major driver of global growth and a shaper of global markets including the USD, U.S....

When Chinese are open to the truth, the CCP regime shall collapse, says Steve...

Business editor - 29/07/2020
0
China should prepare for potential U.S. sanctions by increasing use of its own financial messaging network for cross-border transactions in the mainland, Hong Kong...

Cloudy Seagail in praying to release the souls of CCP evils and have mercy...

hong kong editor - 18/11/2019
0
Amitābha Buddha！ Thus I have heard. At one time, the Buddha resides at the top of Diamond Mountain of the Great Kingdom of Fires. The Buddha...