Mr Turnbull warned the eyes of the world are on Beijing, calling for China to rein in North Korea during a press conference with U.S. Vice President on Saturday.

‘We are quietly confident, I would say, that China will step up to this challenge and responsibility.

‘China has a leverage, an ability to influence North Korea that far exceeds any others.’ 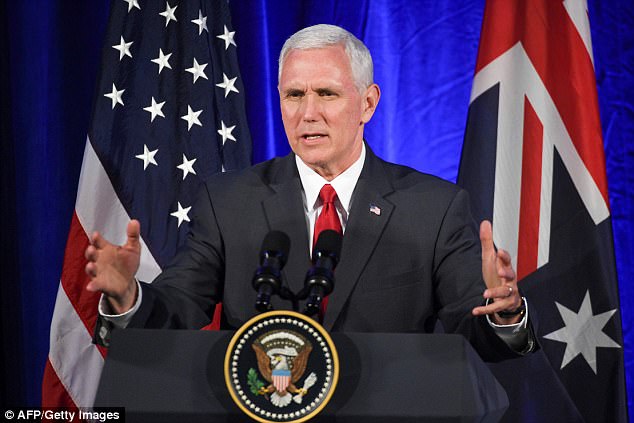 ‘It is self-evident that China has the opportunity and responsibility to stop this reckless and dangerous trajectory,’ Mr Turnbull said

The Australian Prime Minister further added that China ‘has a leverage, an ability to influence North Korea that far exceeds any others’.

Mr Pence characterised North Korea as an ‘urgent and most dangerous threat’ to peace and security in the Asia Pacific.

‘While all options are on the table, let me assure you the United States will continue to work closely with Australia, our other allies in the region and China to bring economic and diplomatic pressure to bear on the regime,’ he said.

Tensions between the US and the North have soared recently following a drumbeat of missile tests and fears that Pyongyang may be readying a sixth nuclear test.

Mr Pence said a peaceful outcome with the Korean peninsula was still achievable because of warming ties between Beijing and Washington.

‘We truly believe that, as our allies in the region and China bring that pressure to bear, there is a chance that we can achieve a historic objective of a nuclear-free Korea peninsula by peaceful means,’ Mr Pence said.

‘We are encouraged by the steps that China has taken so far,’ he said at a joint news conference with Australian Prime Minister Malcolm Turnbull.

Mr Turnbull said it was ‘self-evident’ China was capable of applying more pressure ton North Korea, but dismissed questions whether Australia would be involved in any future regime.

‘At this stage, the support we are providing is at the level of diplomacy [and] is of critical importance,’ Mr Turnbull said.

‘If China is unable to deal with North Korea, the United States and our allies will,’ Mr Pence said.

‘We know that our security is the foundation of our prosperity.’

Mr Pence also sought to clear the waters about the location of US supercarrier Carl Vinson that was supposedly steaming towards North Korea, saying it would arrive in the Sea of Japan ‘in a matter of days’.

The USS Carl Vinson aircraft carrier was expected to arrive in the Sea of Japan before the end of the month, Pence said.

The US Navy on April 8 said it was directing a naval strike group headed by the Vinson to ‘sail north’ from waters off Singapore, as a ‘prudent measure’ to deter the hermit regime.

But the Navy admitted Tuesday the ships were in fact sent in the opposite direction — away from Singapore and towards Australia to conduct drills with the Australian navy.

Mr Pence was also questioned about the refugee agreement between Australia and the US, after President Trump labelled it a ‘dumb deal’ on social media.

He said: ‘The US intends to honour the refugee agreement. President Trump has made it clear we’ll honour the agreement but it doesn’t mean he admires it.’

Mr Pence said he had confirmed to Mr Turnbull the agreement was going ahead and they had already initiated the process subject to vetting procedures.

Mr Turnbull thanked Mr Pence for honouring the deal made by his predecessor Barack Obama.

‘Whatever the reservations of the President are about the deal it speaks volumes about the United States. Thank you for that commitment and for restating that today,’ Mr Turnbull said.

Sky News goes deeper into the scandal of Victoria’s signing up...

Donald Trump says US to take action on China over Hong...

June 4th: Establishment of “New China” to be announced