A Chinese tour guide has sparked outrage after bringing a group of tourists to take pictures of Grenfell Tower.

The unauthorised visit saw a bus-load of sightseers dropped off near to the tower, where up to 80 people died in June during a blaze in London’s worst fire disaster since the Blitz.

The tour guide has been sent back to China in disgrace while the bus driver, who when confronted claimed the tourists were Chinese health and safety experts, has been suspended.

Tourists were seen taking out their cameras and taking pictures of the disaster site on Wednesday.

Witness John Gregory said: ‘When I approached the coach driver, he said that they are health and safety experts from China. Surely there are enough photographs on the internet of the tower that they don’t have to come in busloads to take photos of it.’

Moyra Samuels is a campaign co-ordinator at Justice4Grenfell and condemned the tourists.

‘Today we are burying three people from the tragedy. People need to remember this is a community that is still grieving.’ 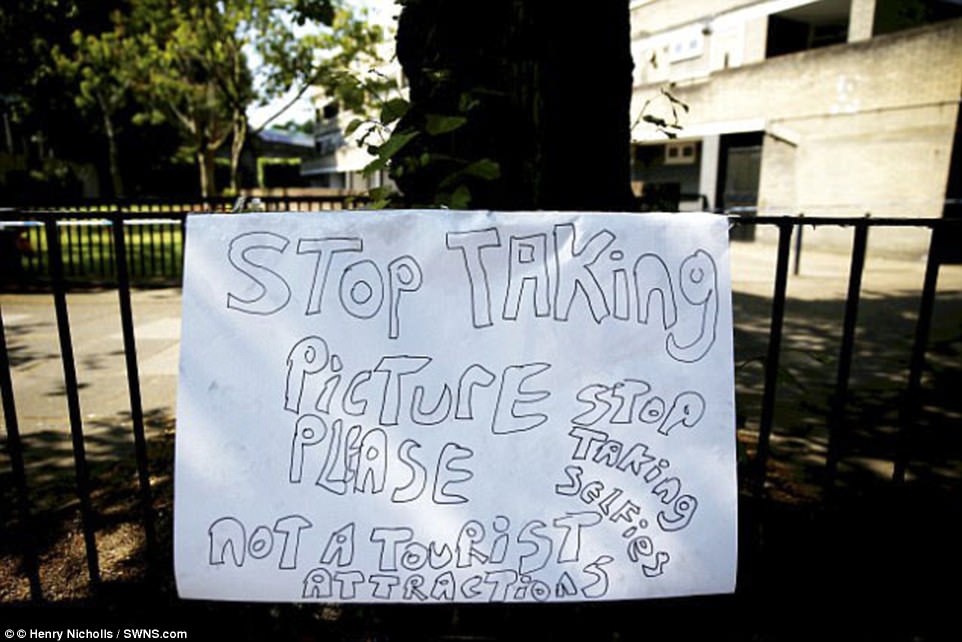 It is the latest example of so-called grief tourism, with scores of people travelling to the tower in order to snap selfies

Siobhan Piner said: ‘I can not understand the morbidity of wanting a photo. If you go there, especially, it’s to pay your respects and reflect on the tragedy, not to take photos.

‘Come on people, have some integrity and respect.’

Adrian Palmer wrote: ‘It’s a sight for experiencing the sheer terror and needless suffering of so many people.

‘You only have to see the pictures of the children who lost their futures, to realise that it is to be treated with respect, not as a tourist attraction.’

And Louise Russell commented: ‘This is disgusting.’ 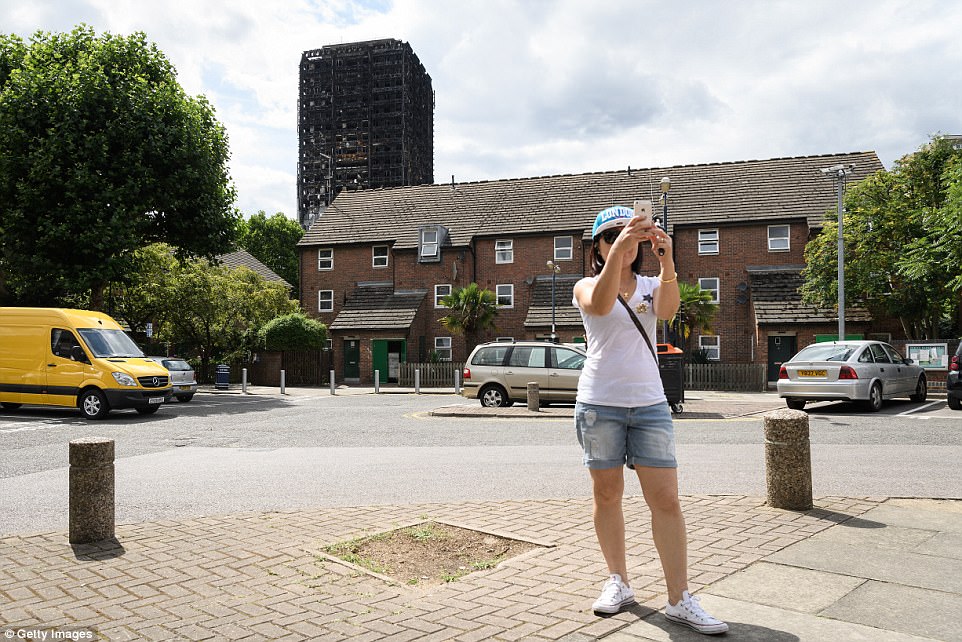 A month after the tragedy tourists were posing for selfies with the blackened tower in the background. This picture was taken in July

Coach provider BM Coaches confirmed the driver had been suspended and the tour guide sent back to China.

James Buckingham, operations director at BM Coaches, told the MailOnline: ‘I would like to apologise most sincerely on behalf of BM Coaches & Rental Limited for the insensitive actions of the group we were contracted to supply transportation too.

‘I have checked thoroughly through the itinerary provided by the Tour Company and this was an unauthorised visit and as such the company will take the strongest possible action against the driver concerned.

‘Such behaviour is completely against the philosophy with which we run our business.’

BM Coaches has also made a donation to the Grenfell Fund as an apology.

This is the latest example of so-called grief tourism, with scores of people travelling to the tower in order to snap selfies.

The trend has been slammed by locals who accused visitors to Grenfell of turning it into a tourist site.

Speaking in the days after the fire, Lorraine Warrington, who has lived on the nearby Silchester estate her entire life, said: ‘This is not the time or place to take selfies – in front of a tower block where my friends passed away.’

And at last month’s Notting Hill Carnival, police were forced to erect a ‘ring of care’ around Grenfell to stop people taking pictures of the tower.

Art & Entertainment editor - 22/08/2017
0
hinese companies talked about not wanting to be regarded as the latest in a series of foolish foreign investors in Hollywood. But it took the...

U.S. officials will look for steps by China to open markets

Society editor - 20/01/2020
0
President Xi Jinping has ordered resolute efforts to curb the spread of the novel coronavirus (2019-nCoV) that caused cases of pneumonia. Instructing on the work...

Lifestyle editor - 04/09/2018
0
In the last year, a selfie on Youtube “Little Brother Talks About Politics (小哥谈政事)” has been very popular  among Chinese viewers. This following is...

History will take note of every single word of this one-minute speech by Guo...

Guo Wengui editor - 28/05/2019
0
Dear warrior friends! Have you done your physical exercise? Have you splashed water on your body? Today is May 26th, and we will enter the June...

Xi Jinping and Wang Qishan: enemies of the people

chinese communist party editor - 29/11/2019
0
The CCP leadership cored by Xi Jinping and Wang Qishan has become a swarm of ants in heated wok after US President Donald Trump...

chinese communist party editor - 18/05/2020
0
I am not fully informed of everything happening inside the Chinse Communist Party (CCP) leadership, But I can assure Mr. Luthur that 100 percent...

Uncategorized editor - 21/09/2017
0
China’s credit rating has been downgraded by Standard & Poor’s amid fears rising debts are adding to economic and financial risks. The agency lowered China’s...

Society editor - 14/02/2017
0
The State Council has carried out inspection tours to supervise local governments’ work in addressing the issue of wages owed to migrant workers. Addressing the...

US china editor - 05/11/2020
0
For decades, Donald J. Trump was one of the few prominent Americans to recognize the true nature of the Chinese Communist Party and its...

CCP has covered up the eyes of the Chinese people, says former top US...

Uncategorized editor - 22/11/2017
0
China has been pumping a lot of cash into its system to lift market sentiment, as the world's second-largest economy walks a thin line between curbing...

Business editor - 28/08/2017
0
For years, China’s three state-owned airlines kept adding flights on international routes to chase after the country’s expanding middle class who can afford to...

This is what Africans really think of the Chinese

Trade editor - 06/02/2017
0
By Sophie Morlin-Yron Increasing Chinese investment in everything from small food enterprises to massive railway projects across Africa has drawn criticism and warnings of a...

Consulate closures: comparison of actions in Chengdu and Houston

US china editor - 28/07/2020
0
Closure of US Consulate General in Chengdu At dawn on Monday July 27th, the American flag outside the consulate in Chengdu, China was lowered while...

chinese communist party editor - 02/12/2020
0
China’s bluster and bravado is certainly something to behold. Be it creating international spats over “repugnant” tweets; threatening a democratic nation with invasion; making its critics vanish...

World editor - 23/05/2021
0
On May 20th, The European Parliament overwhelmingly voted to freeze the ratification of the “EU-China investment deal,” due to the sanctions that Beijing has...

News editor - 26/06/2019
0
Editor Note: Once again, the Chinese state-run People's Daily (Global Times) has taken on the U.S. Secretary of State Michael Pompeo calling him a...