Although China’s official stance is that sanctions are not the answer to the increasingly tense situation on the North Korean peninsula, calls for action and concern about the situation are growing at home. This comes even as the government is working hard to limit broader discussion.

In the wake of Sunday’s test, North Korea’s most powerful to date, media organizations and websites in China were ordered to close commentary sections on the nuclear test and to “not hype” the story, according to a censorship directive obtained by China Digital Times.

On the website Freeweibo.com, which collects and monitors censored social media posts, “hydrogen bomb” and “North Korea” continue to lead a top 10 list of blocked topics. Still, not all comments were being taken down as quickly as they went up.

Many expressed frustration not only with North Korea, but the government’s censorship tactics.

Clearly for many in China, there is a growing concern about the nuclear threat not only posed by North Korea, but the domino effect that could create.

One post in support of tougher sanctions said: “To avoid Japan and South Korea deploying nuclear weapons and war breaking out, and any radioactivity being cast on our country, our only choice is to thoroughly comply with U.N. Security Council sanctions and cut off all oil supply and trade with North Korea.”

The post added that China should also discuss with the United States how both can look after their own interests following the collapse of North Korea. Analysts note that a key reason China has hesitated going too far with sanctions has been its fear that it could lead to the collapse of the regime in Pyongyang.

That, and a possible humanitarian crisis along its northeastern border. For those living in China’s northeast, however, there are concerns about radiation and even North Korean missiles.

The Chinese government says it is focused on getting the parties back to the negotiating table and talks that have been stalled since 2008. But as Pyongyang’s provocations continue, some online are more focused on matters at home.

“We don’t need to condemn (North Korea). We need the government to protect the safety of its people in the northeast,” said another post. “The lives of our people matter more than anything. And what about an emergency plan?”

Another post criticized the government for apparently focusing more on South Korea’s deployment of a U.S.-made missile defense system.

“You see that is the feature of those people. They ignore how North Korea is repeatedly testing nuclear weapons on our doorstep and claim South Korea has damaged the regional balance of power because they deployed THAAD to protect their own people,” the post said. “For those ‘people’ who rule China and prop up the Chinese dream. Do you feel safe? Is that making your country stronger?” 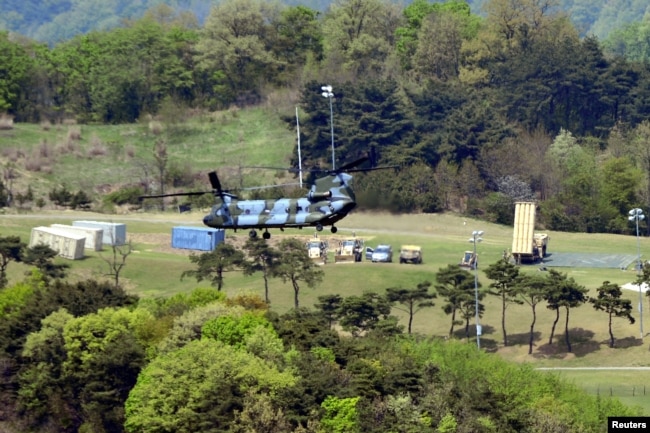 Facing calls for action at home and pressure from both Pyongyang and Washington, Beijing is clearly in a pickle, said William Choong, a senior fellow with the International Institute for Strategic Studies in Singapore.

“China’s strategy has always been to do the minimally acceptable option on North Korea, while at the same time maintaining the status-quo,” said Choong. “But the magnitude of the sixth nuclear test that we saw on Sunday was off the chart…so China does have to present to the United States an option that is viable.”

China supported tougher sanctions in early August, agreeing to ban coal, iron, lead and seafood. And given that China is the North’s biggest trading partner, it has already made a point to let the world know that it is feeling the pain more than any other country.

Late last month, China’s Ministry of Commerce announced a ban on North Korean companies setting up new joint ventures or increasing investment in already existing joint ventures. In the wake of Sunday’s test, the United States is pushing for a ban on exports of oil to North Korea.

Choong said it is possible that China could cut off oil exports to North Korea, a move that would hurt Pyongyang. It could also offer to restrict North Korean workers from working in China and send them home. North Korea has been accused of using forced laborers to bring in illicit funds. China was included in a list of the world’s worst human traffickers this year, in part because tens of thousands of North Koreans work here.

China is North Korea’s biggest supplier of oil, but just how much it supplies is unclear. The important thing is that oil from China is subsidized, notes Andrei Lankov, director of the Korea Risk Group.

“Nobody knows exactly how much oil they are getting, and from exactly which sources, but it is not the only source,” Lankov said. “It is the only source of cheap, really seriously cheap subsidized oil.”

Lankov said if China did cut exports, North Korea would still find ways to import it, but adds it would have an impact.

“If North Korea loses access to oil, it will face great economic difficulties. It’s quite possible that there will be outbreaks of unrest because recently, contrary to what you have probably heard, North Korean’s living standards have increased significantly,” he said. “And people don’t like it when their living standards suddenly go down.”

Both Choong and Lankov, however, doubt that an oil embargo would lead to an end of the North’s nuclear program.

Counter the CCP: Pompeo meets the Quad in Japan

World editor - 06/10/2020
0
U.S. Secretary of State Michael Pompeo has been very busy traveling across the globe. He has only one purpose in his mission: to form...

The honor of the title of general is no better than a warrior uniform...

Military editor - 13/12/2019
0
Seven Chinese military officers have been promoted to the rank of general, the highest rank for officers in active service in China, according to...

On the Unscrupulous Nature of the Chinese Communist Party

chinese communist party editor - 25/09/2019
0
The communist movement, which has made a big fanfare for over a century, has brought mankind only war, poverty, brutality, and dictatorship. With the...

human rights editor - 01/04/2017
0
China will step up a campaign against religious extremism in the far western region of Xinjiang on Saturday by implementing a range of measures,...

Trade editor - 19/09/2017
0
US Trade Representative Robert Lighthizer on Monday (Sept 18) zeroed in on China, calling it an unprecedented threat to the world trading system. And asked...

Politics editor - 30/09/2018
0
The performance of French President Macron is naive, awkward, and stupid at the United Nations General Assembly and his vision for Europe would cause...

Chinese tech titans on hunt for next big thing

Business editor - 09/06/2017
0
In the search for new growth in the world’s biggest internet market, China’s three tech titans are spending billions of dollars on dozens of...

Trade editor - 15/08/2018
0
China’s leaders have sought to project confidence in the face of President Trump’s tariffs and trade threats. But as it becomes clear that a...

chinese government editor - 01/06/2020
0
China has released a master plan for the Hainan free port that aims to build the southern island province into a globally influential duty-free...