285. That’s the number of new purpose-built eco-cities that China claims to be developing. This is not a joke or an ironic jest at a country that has garnered a global reputation for rendering itself an ecological wasteland. This is a very real development that is taking place in a China that is attempting to rapidly transition and stabilize on many fronts.

What started out as a few experimental developments to test new green urban design and technological systems has turned into an all out movement. Eco-cities are now being built across China, from the eastern seaboard to the fringes of Central Asia, from Inner Mongolia to the jungly hinterlands of the south. 80% of all prefectural-level cities are now said to have at least one eco-city project in the works, and it has been estimated that in the near future over 50% of China’s new urban developments will be stamped with labels such as as “eco,” “green,” “low carbon,” or “smart.” In a country that has roughly 650 established cities, the impact of this eco-city building bonanza could be drastic — even if only a modest portion of them are ever actually completed and populated.

We read these stories of China’s forays into the futuristic fringes of urban development, and it seems impressive, but trying to access any information that goes deeper than headlines and bare facts is often a fruitless dive into the black box of the Chinese development sector, which generally goes light in the public outreach department. To really find out what is happening in China’s eco-cities you need to go there — you need to go out and look at these new developments first hand, talk to the people building them, and the investors and prospective residents who are betting on their future success. 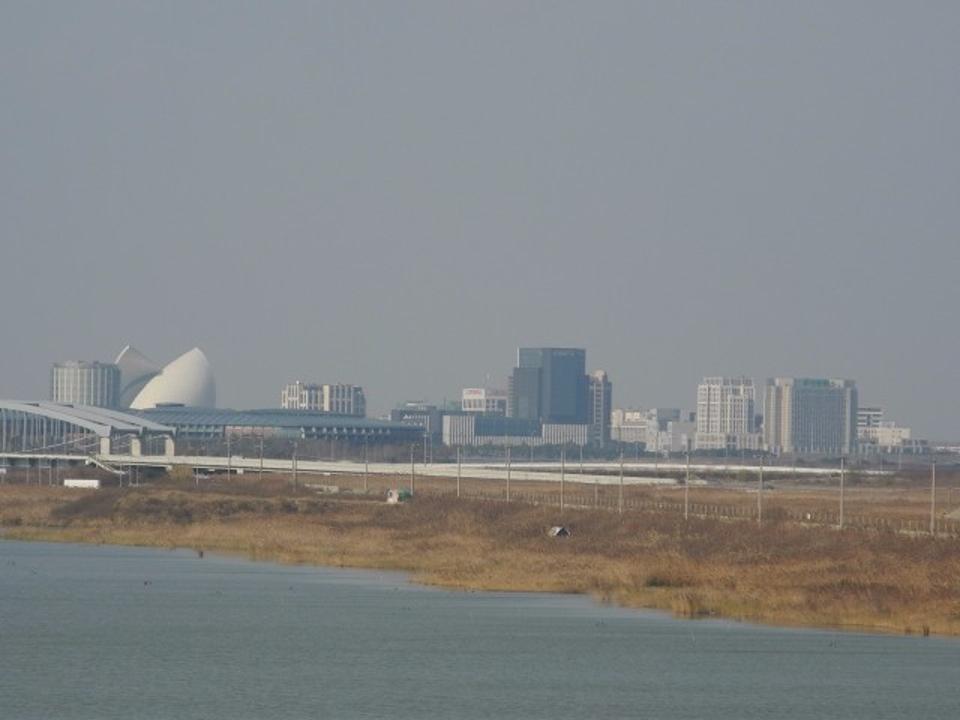 Wade Shepard | The new city of Nanhui, a Chinese eco-city, rising up on reclaimed land. Notice the heavily polluted sky.

Fortunately for those who are not particularly drawn to the dystopian liminal zones of a rapidly urbanizing China, the Jiaotong-Liverpool University professor and writer of all things urban, Austin Williams has already done this for us, documenting his findings in a new book called China’s Urban Revolution: Understanding Chinese Eco-Cities. Over the course of three years, Williams traveled to dozens of eco-cities around China, documenting their progress and figuring out what this movement is really all about.

But what, exactly, is an eco-city?

While the words ‘eco’ and ‘city’ being combined together in any fashion seems like an abject oxymoron, and there is a troubling fact about the term that goes beyond this apparent contradiction:

“There is no definition of an eco-city, which makes them incredibly easy to invent,” Williams very accurately quipped.

There are no formal standards as to what an eco-city is or is not, no certification criteria, no officially mandated seal of approval. While there are rating programs, such as LEED and China’s “Three Star” system, which measure individual buildings against a criteria of green and low-carbon standards, there is no similar set of standards for entire cities. Basically, “eco-city” is little more than a conceptual framework at best, a rather effective marketing strategy at worst, and we need to take the words of government officials, designers, and developers at face value when they claim to be building cities of such distinction. 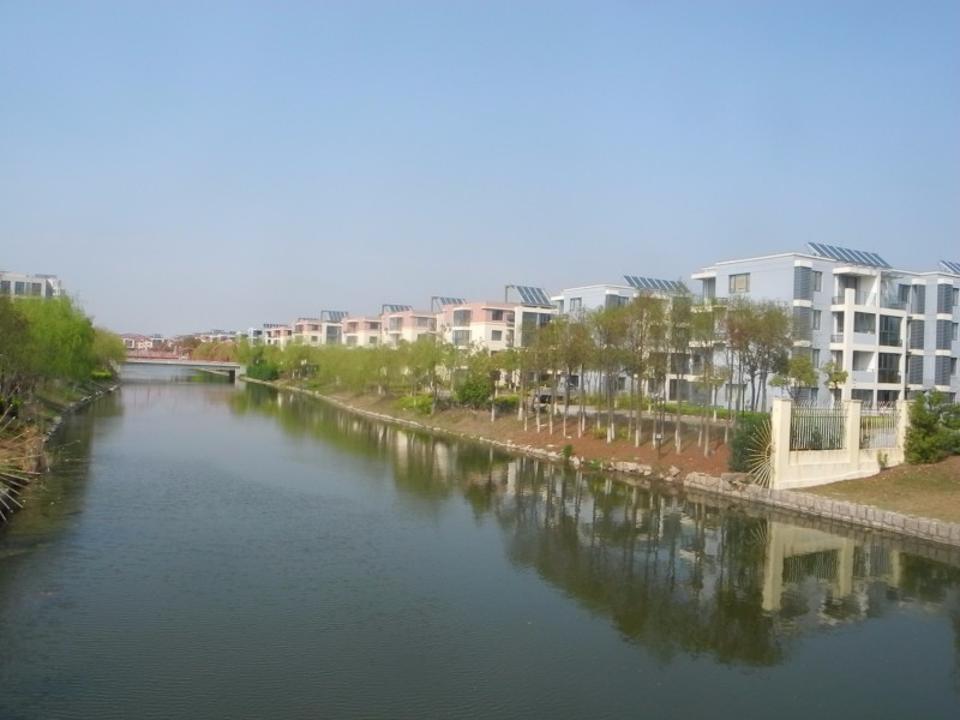 Wade Shepard | Nanhui, an example of a Chinese eco-city.

“A Chinese eco-city today used to be called a Chinese city a few years ago,” Williams proclaimed. “A prefix — or an eco-certificate — is a statement of intent, of bravado, of bullshit.”

Generally speaking, an eco-city is a self-contained, holistically-designed new urban development that aims to be less environmentally pernicious than the established urban standard of the country it is being built in. Basically, they are cities that claim to bridge the human/nature divide, pollute less, use less resources, emit lower amounts of carbon, utilize renewable energy, recycle more, have a higher percentage of energy efficient buildings, are set up for lower-carbon means of transport, and are posited as models for the way humanity will live next.

“In the West, eco-cities are supposed to save the world; in China they are simply meant to provide a decent quality of urban environment,” Williams said. “In the West, eco-cities are about nature: carbon reduction, restricting cars, minimizing consumption, and restraint; while in China they are still about people, economic growth, improved conditions, better mobility, and social progress… China’s eco-cities are simply intended to be much-needed urban improvements and infrastructural development with an eco-prefix.”

Why is China building so many eco-cities? 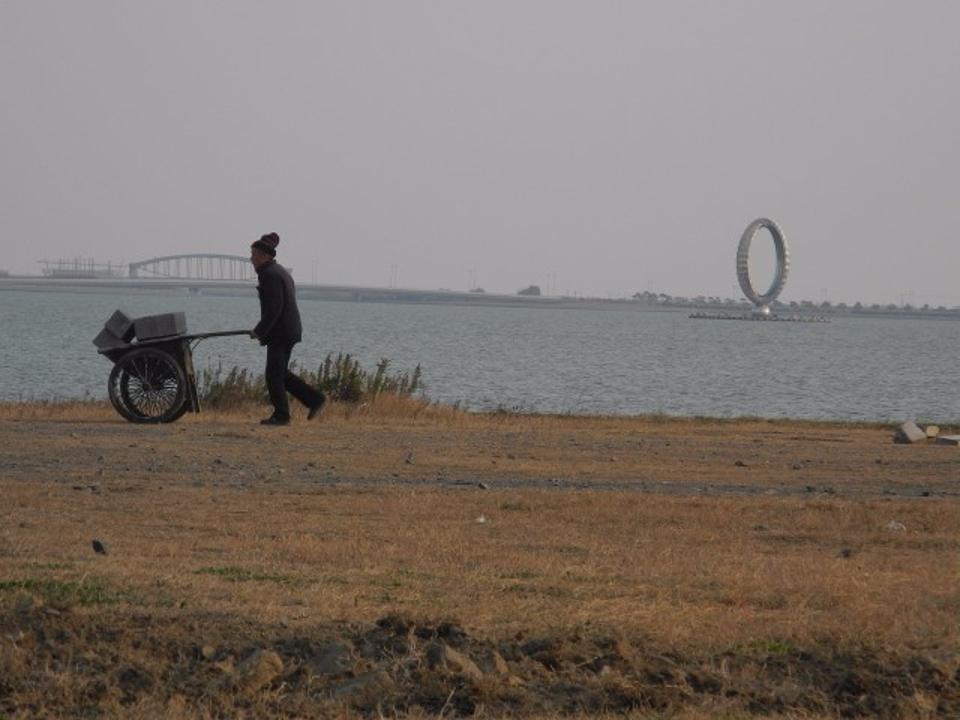 Construction worker walks by Nanhui’s central lake, which is part of what makes it an eco-city.

While eco-cities are a trend that was first developed in the West and promoted by such intergovernmental institutions such as the United Nations’ UNHabitat, China has swiped the eco-city torch and ran with it — ran with it far, far ahead.

As Williams wrote in his book about China’s eco-cities:

“In many ways, Eco-cities, as they are commonly understood, could only happen in China: a vast country with large areas of notionally clear space (or the will to create large areas of open space), an erstwhile pliant population, an authoritarian regime, vast amounts of money, a positive vision of the future, local and national pride, a competitive spirit, a belief in change for the better, a blithe willingness to spend money and energy, and a casual disregard for the market where necessary.

However, China has taken to eco-city building for some very valid reasons. This is a country that has urbanized faster and more extensively than any other country in history — by far. Since 1949, when the Communist Party first came to power, China created (or designated) over 600 new cities. In the past three decades alone, the country has urbanized more people than the entire population of the United States, and by 2030 expects to have over a billion urban dwellers — which means an Estonia-size population chunk is going to have to urbanize each month (yes, month). 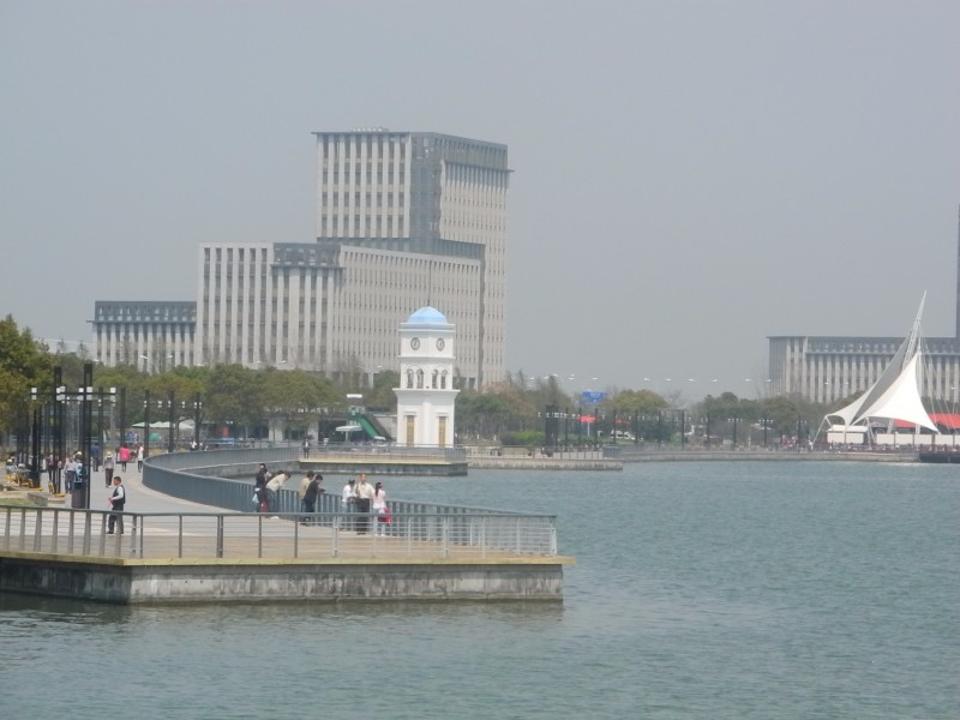 The lake area of Nanhui. This lake was doubled in size so that it would be larger than Hanghzhou’s West Lake. Notice the heavy air pollution.

However, through China’s rampant industrialization and urbanization push entire swaths of the country have descended into environmental wastelands, with 50% of the drinking water below international standards, upwards of 40% of the arable land laced with heavy metals and other toxins, and 90% of the cities having air that is harmful to breath — the later of which reportedly causes 1.6 million premature deaths each year. The rapidly rising China of today is a country where the aquifers are being depleted, massive lakes and rivers are drying up, coastal wetlands wiped off the face of the earth, and mountains that are being removed.

China’s environmental condition is perhaps the biggest destabilizing force the Communist Party is now facing, as the population is no longer in the dark about their contaminated environs and have become less docile about trading ecological ruin for economic progress. Nobody mistakes the smog for fog anymore. As the 2000s turned the corner into the 2010s, and an educated middle class has emergee, it has become overtly clear that China needs to do something about its environment.

World editor - 25/08/2017
0
Chinese president Xi Jinping said on Thursday that he is ready to make concerted efforts with his South Korean counterpart Moon Jae-in to address...

The Communist regime shall be cursed to threaten Taiwan’s freedom and democracy with a...

human rights editor - 03/01/2019
0
President Xi Jinping on Wednesday said China must be and will be reunified, as he addressed a gathering in Beijing to commemorate the 40th...

Are you still single? The annual question dreaded by China’s ‘leftover women’

Society editor - 28/01/2017
0
By Alice Yan “Are you still single?” That’s the one question Rachel Xu Rong knows she’ll be asked repeatedly during her home town holiday this Lunar...

Tech editor - 16/06/2017
0
China’s first astronomical satellite, an x-ray telescope that will search the sky for black holes, neutron stars, and other extremely energetic phenomena, raced into...

Social media editor - 06/08/2017
0
Enterprising internet users in China fear the tools they use to tunnel through the country's "Great Firewall" may soon disappear, as Beijing tightens its...

US china editor - 20/08/2020
0
Peter Navarro, director of the Office of Trade and Manufacturing Policy, reaffirmed that the coronavirus had been created by the Chinese Communist Party when...

Society editor - 15/11/2017
0
THEY’RE known as The 50 Cent Party and the unofficial group is defining the way governments manipulate society via social media. CHINA’S army of keyboard...

Society editor - 11/08/2017
0
A passenger coach has crashed into the wall of a expressway tunnel in China, killing at least 36 people and injuring 13, state media...

Chinese government hits back at student spying claims in Australia

immigration editor - 06/06/2017
0
The Chinese government has hit back at a Fairfax/Four Corners investigation into its influence in Australia. A Chinese foreign ministry spokeswoman said the claims of spying...

Trade editor - 19/05/2018
0
American and Chinese officials made progress on Friday toward an agreement that could help avert a trade war, with China pledging to increase its...

Society editor - 27/05/2017
0
The largest floating solar power plant in the world is officially in operation. Located in the city of Huainan in the Anhui province in China,...

World editor - 28/10/2019
0
SECRETARY OF DEFENSE MARK T. ESPER: We also discussed the NATO Readiness Initiative, which is a critical step to re-instilling a culture of readiness throughout...