Revelations that a New Zealand lawmaker had been a member of the Communist Party in China and taught English to spies there have raised alarms about Beijing’s influence in New Zealand — and how well the political parties there vet their candidates.

Jian Yang, a lawmaker with the center-right National Party, did not declare his past Communist Party affiliation or his work teaching spies in China on his New Zealand citizenship application. He was returned to Parliament for a third term in the country’s Sept. 23 elections.

Days before the election, as some New Zealanders were casting advance ballots, Mr. Yang’s background was exposed in a joint investigation by The Financial Times and the New Zealand online media outlet Newsroom.

While New Zealand is a small country, it is a member of the “Five Eyes” intelligence sharing partnership along with the United States, Britain, Canada and Australia. And so vulnerabilities in New Zealand’s government could have wider import.

Mr. Yang admitted that in the 1980s and early ’90s, before emigrating to Australia and then moving to New Zealand to teach at a university, he studied and taught at two Chinese educational institutions run by the People’s Liberation Army, China’s armed forces.

He said he had not named the Chinese military institutions on his application for New Zealand citizenship, and had instead listed “partner institutions” as his employers, because that was what the Chinese “system” had told him to do.

Mr. Yang conceded that he had taught English to spies, but said he had never been a spy himself, was no longer a member of the Communist Party, and had been contracted and paid only as a so-called civilian officer.

Mr. Yang has not been officially investigated in New Zealand or charged with espionage.

But Nicholas Eftimiades, a former officer with the Central Intelligence Agency with extensive experience on China matters, said the title of civilian officer was a fluid one in China.

Mr. Eftimiades, now a lecturer at Penn State Harrisburg in Pennsylvania, said officers moved seamlessly between military and civilian assignments to include Chinese army units and work in the defense industry, think tanks and universities. 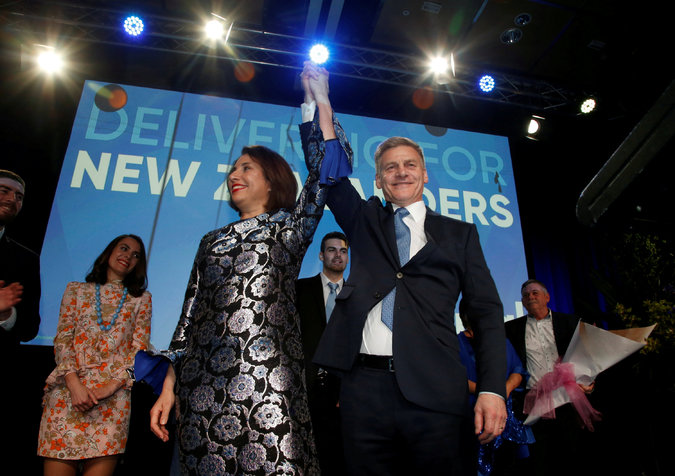 New Zealand’s prime minister, Bill English, and his wife, Mary, during an election-night event in Auckland last month. Mr. English said the National Party had been aware of Mr. Yang’s background, and Mr. Yang had made no attempt to hide it. CreditNigel Marple/Reuters

“Whether in uniform or not, these personnel are still actively engaged in espionage,” said Mr. Eftimiades, who also worked with the Defense Intelligence Agency in the United States.

Several China experts said in interviews that it was not possible for people to willingly “leave” China’s Communist Party, as Mr. Yang said he did, unless they had been expelled from it. Mr. Yang has not denounced the party.

Rodney Jones, a New Zealand economist who lives in Beijing and who has worked in Asia for 30 years, said that an “unrepentant” former member of the Communist Party should not be eligible to be a New Zealand lawmaker. He said that Mr. Yang should resign from Parliament.

The leadership of both major political parties in New Zealand said they were not concerned by the revelations. Bill English, the incumbent prime minister whose party Mr. Yang belongs to, said through a spokesman that he did not “see any obvious signs of anything inappropriate” and would not be interviewed on the matter.

Mr. English said the National Party had been aware of Mr. Yang’s background, and Mr. Yang had made no attempt to hide it.

The revelation comes as both the National and Labour parties have come under scrutiny in a report on China’s influence on the New Zealand government by Anne-Marie Brady, a political-science professor at New Zealand’s University of Canterbury.

Ms. Brady said that since the ascension of President Xi Jinping, China’s government has mounted an aggressive campaign of using soft power to influence New Zealand’s politics, economy and society, including through campaign donations.

In her report, Ms. Brady said that this year “a Chinese diplomat favorably compared New Zealand-China relations to the level of closeness China had with Albania in the early 1960s.”

She said the Chinese-language media in New Zealand was subject to extreme censorship, and accused both Mr. Yang and Raymond Huo, an ethnic Chinese lawmaker from the center-left Labour Party, of being subject to influence by the Chinese Embassy and community organizations it used as front groups to push the country’s agenda.

Mr. Huo strongly denied any “insinuations against his character,” saying his connections with Chinese groups and appearances at their events were just part of being an effective lawmaker.

Chinese-language news media outlets in New Zealand reported that Mr. Yang had presented awards in April to members of the New Zealand Veterans General Federation, a group made up of former Chinese military or police officers now living in New Zealand. The awards were reportedly for members’ activities during a visit to New Zealand by Premier Li Keqiang of China, when they blocked the banners of anti-Chinese government protesters and sang military songs.

Mr. Yang would not comment on the report, other than to say in a statement that “allegations about my loyalty to New Zealand” were “a racially and politically timed smear.”

“When he speaks, he speaks more as a Chinese government representative, instead of a New Zealand lawmaker,” Mr. Chen said.

New Zealand has become increasingly dependent on China as a market for farm products, especially dairy goods, and the two countries have been in talks to expand a free-trade agreement signed in 2008.

Despite the criticism, Mr. Yang has continued to appear alongside Wang Lutong, China’s ambassador to New Zealand, at public events, including for China’s National Day celebrations this week, when he posed for photos with the ambassador and a Chinese military attaché.

Mr. Jones, the Beijing-based economist, said China’s level of involvement in New Zealand could threaten the country’s democratic institutions. Both he and Ms. Brady, the author of the report on China’s growing influence, have called for New Zealand to ban foreign political donations, as Australia is moving to do.

“New Zealand has become so fearful of the Chinese economic power we’re prepared to throw our values and standards overboard,” Mr. Jones said, adding, “There’s no reason for the fear, except for elites in New Zealand who may lose money personally.”

corruption editor - 02/05/2017
0
BBG Watch has seen evidence that Voice of America (VOA) Director Amanda Bennett, who is one of several Obama administration holdovers in the Broadcasting...

China Tells U.S. to ‘Mind Its Own Business’ in Response to State Religious Freedom...

Religion editor - 17/08/2017
0
The Chinese Foreign Ministry issued a fiery response to the U.S. State Department’s accusations of flagrant religious freedom violations in its latest report on...

World editor - 16/12/2020
0
Canberra is escalating its trade dispute with Beijing to the World Trade Organization, after attempts to privately resolve the issue failed, according to the...

President Xi calls for efforts to create favorable legal environment, which is fishing up...

Politics editor - 26/02/2019
0
President Xi Jinping on Monday called for efforts to create a favorable legal environment for China's reform, development and stability, according to state media...

On How the Chinese Communist Party Is an Anti-Universe Force

chinese communist party editor - 12/09/2019
0
Foreword Chinese people value greatly the “Tao,” or the Way.  In ancient times a brutal emperor would be called “a decadent ruler who lacks the Tao.”...

When will China have the next U.S. Ambassador after Terry Branstad steps down

US china editor - 14/09/2020
0
The US ambassador to China will step down early next month before the November presidential election, ending his three-year tenure marked by a trade...

human rights editor - 15/07/2017
0
The Nobel laureate and democracy icon Liu Xiaobo has been cremated in north-eastern China, Chinese authorities have announced, amid growing fears for the safety...

Military editor - 04/07/2019
0
There has been a growing war of words between Beijing and London following mass protests in Hong Kong against an extradition bill and pressure...

chinese communist party editor - 02/08/2020
0
Jack Maxey is joined by Steve Bannon and Miles Guo for a special edition of War Room to discuss the protests taking place against...

hong kong editor - 20/04/2020
0
Statement of the US State Department: The United States condemns the arrest of pro-democracy advocates in Hong Kong. Beijing and its representatives in Hong Kong...

Tencent, the $500bn Chinese tech firm you may never have heard of

Business editor - 13/01/2018
0
It is China’s web giant and has a string of high-profile investments spanning Snapchat, Spotify, Tesla and Hollywood film and TV. It is a...