Prime Minister Benjamin Netanyahu and China’s Vice President Wang Qishan on Wednesday co-hosted a high-profile trade and innovation conference in Jerusalem and toured an exhibition of Israeli technology start-ups together as the two countries worked to cement their fast-growing trade ties.

A quarter century after establishing diplomatic relations, Israel and China have become important trade partners, with China emerging as an eager customer of Israeli technology.

Netanyahu said that the Chinese government’s choice to send Qishan, a close confidant of President Xi Jinping, to co-chair this year’s Israeli innovation summit “reflects the growing ties between our countries, our economies, our peoples.”

Wang praised Israel as an innovation hub that China hopes to learn from as it modernizes its fast-growing economy.

China has become Israel’s second largest trading partner, trailing only the US. Israel exported $2.8 billion to China in the first half of 2018, an 80 percent jump from the previous year. In the last two years, Israel and China have signed a breakthrough visa agreement, opened direct flights, and conducted hundreds of joint research projects.

“Our bilateral relations are at a new height,” Wang said in a speech at the summit’s gala. “Our arms are wide open, for countries to innovate, to start businesses in China.”

Netanyahu announced that the two countries will complete a free trade agreement next year, and that China plans to invest heavily in Israeli infrastructure, including new ports and a light rail.

At the end of the evening, Netanyahu met with CEO of retail giant Alibaba Jack Ma and touted the fact that the summit was attended by influential entrepreneurs such as Ma and former Google CEO Eric Schmidt, who spoke at the evening gala.

“I spoke with [Ma and Schmidt] to examine how to continue developing Israeli technology and how to get Israel to break into all global markets,” Netanyahu told reporters.

“I want to tell you, their admiration toward Israel is amazing.” 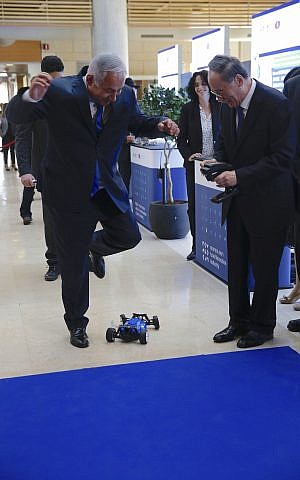 “China and Israel are a perfect match,” said Dale Aluf, the director of research for Sino-Israel Global Network & Academic Leadership, a think tank that promotes closer Israeli-Chinese relations. “China may be a huge market, but it has a lot of domestic problems–pollution, desertification, an aging population. Israel has the technology to solve those problems.”

Netanyahu also said he and Wang pledged to create professional training programs in agriculture, entrepreneurship and public health, allowing Israeli tech companies to penetrate the Chinese market. He stressed that China has made breakthroughs in intellectual property protection, likely attempting to assuage start-ups concerned about the risks of working in China.

The leaders made no mention of Chinese trade policies that have created friction with the US and Europe. Major trade partners have accused China of discriminating against foreign companies and forcing them to hand over crucial technology.

“We have to be cautious about the types of things we sell to China,” said Aluf. “Defense technology is off the table. But we can sell health care and sustainable development so there’s no reason for America to be upset,” he said.

Wang is one of the most senior Chinese officials to visit Israel since the countries established diplomatic relations in 1992. Credited with orchestrating China’s anti-corruption purge and shoring up support for the Communist party, he is widely considered to be the most powerful vice president in China.