Nobody is going to confuse the dusty fishing village of Duqm for Dubai.

But Oman intends to change this by building an entirely new, $10.7 billion transit-oriented industrial city on the desertified coast of the Arabian Sea, 550 kilometers south of Muscat.

A year ago, Oman signed a deal and opened the doors for a Chinese consortium to move in and do what they seemingly like to do best: build a new boomtown. After constructing dozens of full-scale new cities and completely re-developing dozens more in their own country, Chinese firms are now moving out along the tendrils of the Belt and Road to construct new cities across Asia, the Middle East, and Africa. Duqm is among the most ambitious of such projects.

China‘s new city in the Oman desert has been pragmatically dubbed the Sino-Oman Industrial City, and the ambition is to turn a remote and underutilized Middle East seaport into a vital nerve center of global trade and manufacturing. The 11-square-kilometer endeavor, which sits within the giant Duqm Special Economic Zone (SEZAD), is expected to have not only a vibrant port but an array of other “mega-ventures,” which include an oil refinery, a multi-billion dollar methanol plant, a giant solar energy equipment manufacturing operation, an automobile assembly factory, an oil and gas equipment production site, and a $100+ million building material distribution enterprise.

In addition to being a cluster of industrial operations, the Sino-Oman Industrial City will also have a more human element as well, providing homes for 25,000 people, complete with schools, medical facilities, office complexes, and entertainment centers — which includes a $200 million 5-star tourism zone.

The Chinese consortium has promised to develop 30% of the project area in just five years, with financing and construction firms coming straight from the mainland.

Oman Wanfang, the Chinese consortium that is putting up the money, know-how, and boots on the ground to carry out this massive endeavor, is made up of six companies, most of which are from the Ningxia Hui Autonomous Region — which is largely populated by Chinese Muslims, demonstrating a cultural link with Oman that may help facilitate such deals.

But unlike many other Chinese investor consortiums that are active along the Belt and Road, all of these firms are private, as opposed to being commercial extensions of the Chinese state, and claim that they are not being provided with direct funding from their government to carry out their individual projects in Duqm. However, this doesn’t mean that they don’t have the full backing of Beijing, who is reputedly supporting the venture via its National Development and Reform Commission, who has oddly already enthroned the project as a “Top Overseas Industrial Park.”

Laying right on the Arabian Sea between the Gulf of Oman and the Gulf of Aden, the location of the port/SEZ combo at Duqm fits snuggly into the bosom of China’s Maritime Silk Road — Beijing’s vision of three supercharged sea routes between China and Europe and Africa that are serving as a framework for the development of a plethora of Chinese-owned ports and other mega-projects. From an established basecamp at Duqm, China will be able to better access and secure their energy and trade supply lines throughout the Middle East and East Africa.

It is also probably no coincidence that 77.1% (2015) of Oman’s crude oil and condensates exports go to China. 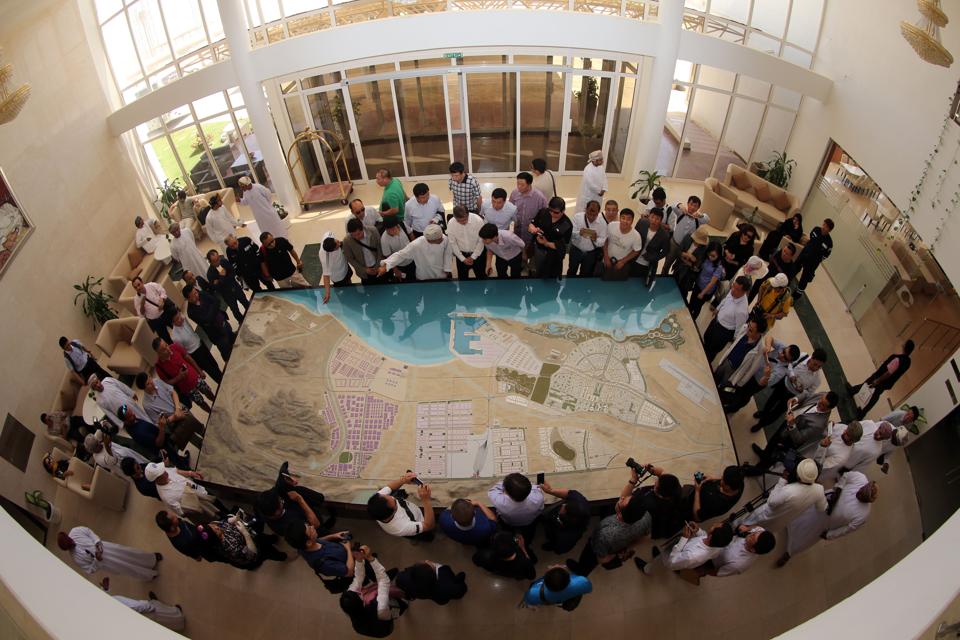 Chinese investors listening to an explanation as they check the model of the dry dock which is to be built following an economic agreement in the Omani port city of Duqm. (MOHAMMED MAHJOUB/AFP/Getty Images)

The Sino-Oman Industrial City is just one of a network of new cities that Chinese firms are currently busy at work constructing along the land and sea routes of the Belt and Road — another entry into a portfolio that now includes Colombo Financial City and Hambantota in Sri Lanka, Forest City and Robotic Future City in Malaysia, a massive port and SEZ project in Abu Dhabi, the $10 billion Kyauk Pyu Special Economic Zone in Myanmar, along with large-scale new developments in western Chinese cities like Horgos, Urumqi, Lanzhou, and Xi’an.

Via its Belt and Road Initiative, China has become a prime partner of countries that are going through three kinds of economic transitions:

Oman joins countries like Kazakhstan and Azerbaijan right in the midst of the third type of transition.

Currently, Oman’s economy is firmly entrenched in a cycle of hydro-carbon dependency. In Oman, oil and gas accounts for nearly 50% of GDP, 70% of exports, and 71% of total government revenue.

This reliance on oil and gas has been posited as Oman’s biggest risk, and the country has been on an all out mission to develop other sectors of its economy, aiming to cut its share of hydro-carbon derived GDP in half by 2020. To these ends, the country has earmarked roughly $106 billion to invest in industries like transportation, tourism, and real estate, with projects to create a new railway network, new airports, enhanced seaports, new cities — a la Duqm — currently underway. The research firm BMI forecasted that the Sino-Oman Industrial City will be a major factor in the rise of Oman’s construction sector, which is predicted to double its growth rate by 2019.

For the record, Oman didn’t go running straight to China with their economic woes, begging the emerging superpower to the east to step in and fund their diversification program. No, as was the case with Sri Lanka, Oman initially tried to secure additional funding for its big development projects from other countries, like Iran, but it was to no avail. China was the only taker, and probably the only country in the world with the capital, political will, and motive for carrying out such long-term, costly developmental endeavors. 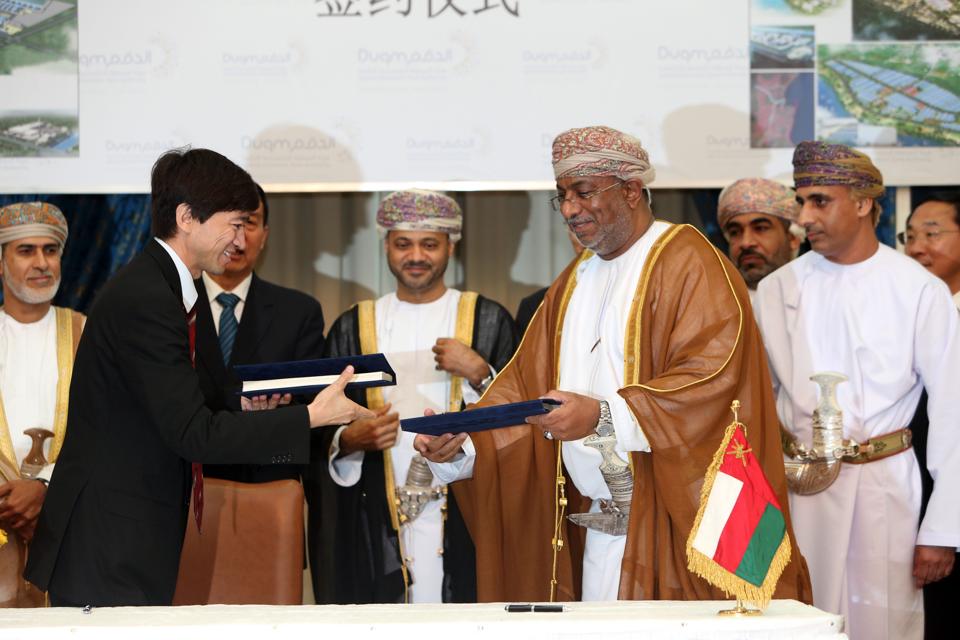 Under the framework of the Belt and Road, China is going around salving the world’s economic deficiencies with bags of money and bulldozers in exchange for long-term engagements:

These new port holdings also further enmeshes China into the political and economic fabric of the world. While seemingly irrational, inflated amounts of money are being passed over the table today, what China is receiving are strong footholds in the international arena that they will be able to stand upon for decades, creating a new geo-economic paradigm in the process. While national leaders put on smily faces and talk about “win-win” partnerships, international infrastructure projects like China’s maritime developments are drawing up the new front lines of the 21st century, where economic leverage is the weapon of choice.

Nobody is going to confuse the dusty fishing village of Duqm for Dubai. Yet.