Didi and Uber’s billion-dollar merger completed last August was assumed to have finally settled the ride-hailing war with Didi as the sole dominator in the Middle Kingdom. However, the peace brought by the truce between world’s two largest ride-summoning services is short lived as well-grounded local rival Meituan has announced they are entering the battlefield.

After finding the ride-hailing service in Meituan’s home page, users in Nanjing can book their trips in an interface and operation process very similar to Didi’s. Payments can be made with bank cards, WeChat or QQ Wallet. 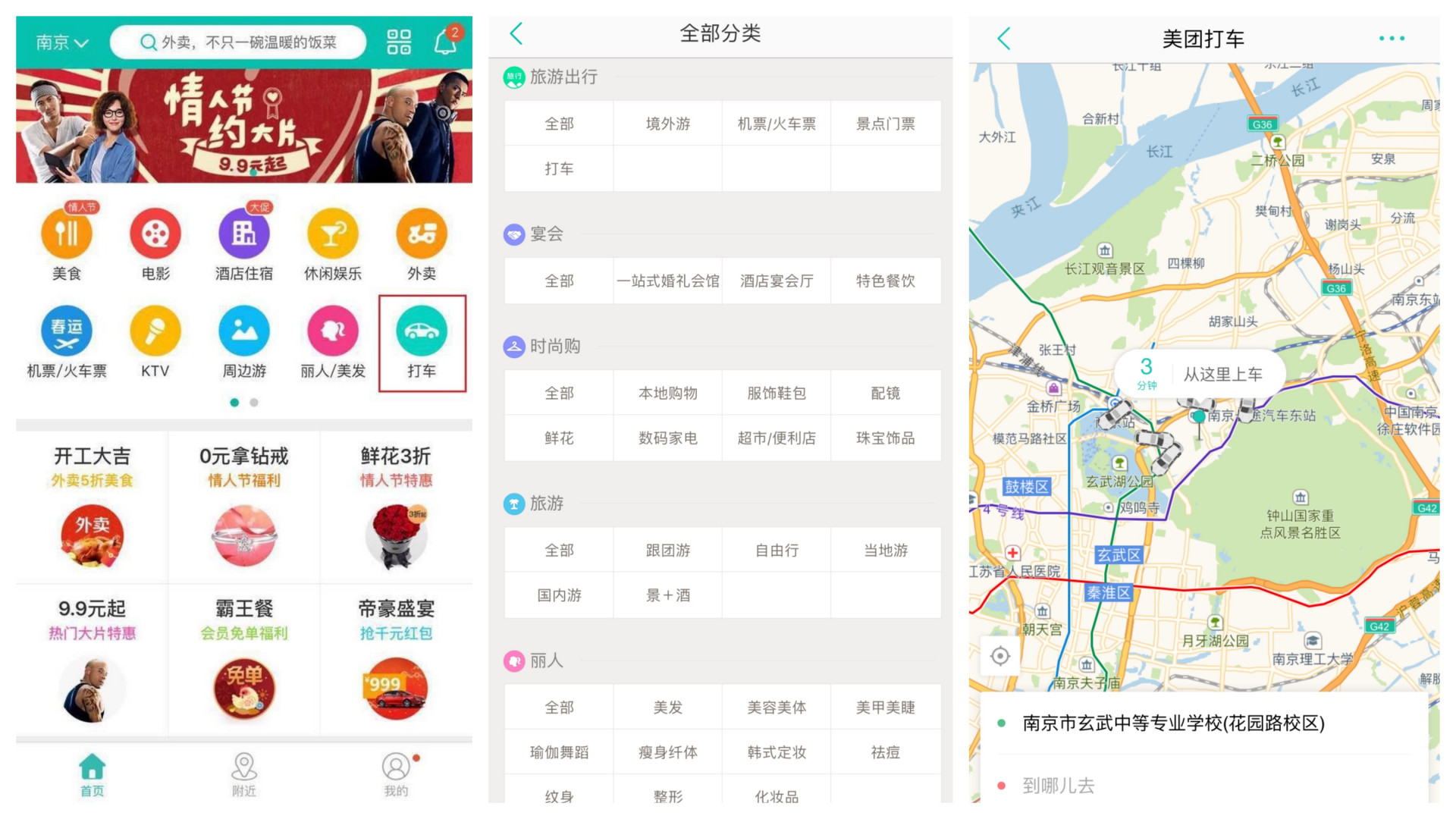 Meituan’s entrance into the ride-hailing industry is quite unexpected given that the internet giant is mainly focused on local lifestyle services. The company has kept a low profile when talking about the new service, only explaining to local media that the feature was added to fulfill rising demand from users.

Meituan has plans to spread the service to more cities, but hasn’t released a timetable for the expansion.

Meituan, now more commonly known as Meituan-Dianping after its merger with once competitor Dianping, has some tricks up its sleeves in competing with the already established players led by Didi.

Meituan-Dianping now claimes to be the third largest e-commerce platform in China, next only to Alibaba and JD. The company has registered over 600 million users with monthly active mobile users hitting 180 million, a company rep told TechNode. This huge user base is expected to bring traffic to the service.

Additionally, nearly all the services that Meituan provides is directly related to intercity transportation services. This could enable an easy transition from one service to another within the app.

Last year, Meituan’s legendary CEO and Chinese internet opinion leader Wang Xing, put forward a proposition that Chinese internet is entering the “Second Half”, believing that “. . . only deep integration can lead to full transition [from the first to the second half].”

Integrating ride-hailing services could be considered in line with the proposition to penetrate other related services. In addition, the company has acquired Qiandai, a third-party payment startup, to make inroads into online payment sector.

There is something much bigger than Trump’s tariffs on China

Politics editor - 18/09/2018
0
The French government has started re-investigation into the death of former HNA chairman Wang Jian early July and the US may follow suit, says...

chinese communist party editor - 31/10/2019
0
The 19th Central Committee of the Communist Party of China (CPC) concluded its fourth plenary session in Beijing on Thursday with the release of...

Business editor - 09/06/2017
0
Chinese web giant Baidu has accelerated development of its Project Apollo autonomous car platform, planning to freely share it with the world as the...

News editor - 25/12/2020
0
First Lady Melania Trump: The President and I want to wish every American a very Merry Christmas. President Trump: During the sacred season, Christians celebrate the great...

Business editor - 19/04/2017
0
BMW Group (BMWG.DE) expects sales in China to grow around 10 percent this year while global sales are likely to climb 5 percent to...

Society editor - 01/01/2018
0
Thousands of people have marched through the streets of Hong Kong on New Year's Day to warn China not to meddle further in the...

Steven Bannon and Miles Kwok meet again to talk about the Committee on the...

World editor - 07/04/2019
0
After separation for about a month, Steven Bannon and Miles Kwok sat together again early today to clarify things about the Committee on the...

Beijing is using underwater drones in the South China Sea to show off its...

Tech editor - 12/08/2017
0
The world's second-largest economy has been deploying disruptive technology that could strengthen its territorial ambitions in the South China Sea. Late last month, Beijing dropped a...

World editor - 22/08/2017
0
CHINA is making a bold move on the Spratly Islands. A fishing fleet — backed by navy frigates and coast guard vessels — has...

chinese government editor - 29/02/2020
0
After CCP killer Guo Wengui had his live broadcast today, warrior friends have joined Ludepress to express their views on the talk of Mr....

human rights editor - 09/03/2017
0
Public debate over an overhaul of China's civil law will grow over the next three years as lawmakers begin to write specific provisions that...

Travel editor - 03/12/2017
0
BENEATH the water of a lake lies a peculiar time capsule of Imperial China. Its perfectly preserved temples date back thousands of years. HIDDEN in...