In Mandarin Chinese, the phrase “sòng zhōng” can mean to send something to China – but it also carries a less innocuous meaning.

Another phrase with exactly the same pronunciation also means to farewell a loved one who is dying.

It is a convenient pun for those who oppose proposed changes to Hong Kong’s extradition laws.

They believe the amendments spell the beginning of the end for Hong Kong.

“If they pass this, Hong Kong will die,” 17-year-old Kenny told SBS News. “We need to fight for our future so that doesn’t happen.”

The Hong Kong government has proposed to amend extradition laws so that authorities in mainland China, Taiwan and Macau could request the extradition of someone living in Hong Kong, who they suspect of committing a crime. 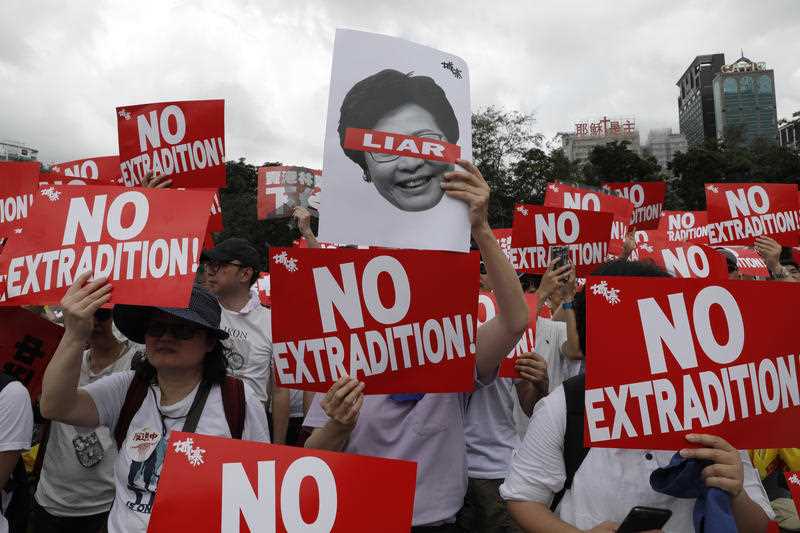 Tens of thousands have taken to the streets in Hong Kong. AAP

Independent legislator Claudia Mo is one of the most high-profile opponents of the extradition amendment. Like many who oppose the changes, she believes the differences between legal systems in Hong Kong and mainland China make any such arrangement untenable.

“They are trying to shut down Hong Kong as a dissent haven because they are fed up with all the noise from here,” she said.

“What next for Hong Kong? I really don’t know.”

Jes Washington 华晶@JesWashington ”This is the opposite side of what one country two systems should be.” HKers are gathering in Victoria Park to protest an extradition bill between HK and the mainland. 400k people are expected.

Activists have been protesting in Hong Kong since April when the Hong Kong government introduced the amendment bill.

Protest actions in Hong Kong this weekend were mirrored in Melbourne and Sydney on Sunday where supporters said the targeting of political dissidents is a live issue.

PhillippaCarisbrooke@PCarisbrooke “A protest in Melbourne against proposed amendments to #extradition laws in #HongKong. Opponents say the changes would make it easier for the Chinese government to pursue political prosecutions against people as they visit, transit or work in the city.” @SBSNews

The proposed amendment has angered many Hong Kong citizens and foreigners who feel that it not only puts Hong Kong’s legal system in jeopardy, but also the very idea of Hong Kong itself and what it stands for.

“If you put a frog in boiling water, the frog will jump out. But if you slowly turn up the heat, the frog won’t know it’s boiling,” said journalism professor Keith Richburg at the University of Hong Kong. 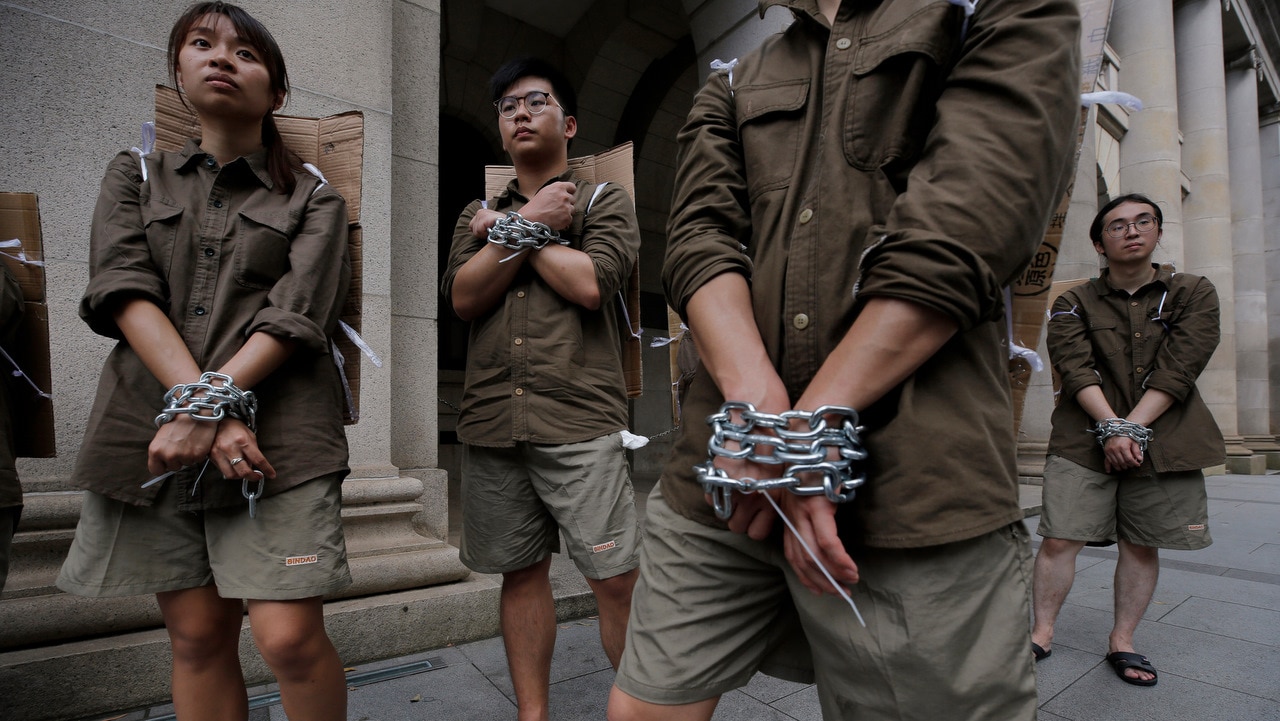 Students chain up as they march to protest against the extradition bill in Hong Kong on 8 June 2019. AAP

“We are seeing a slow bleed. Slowly laws are being put in place to erode Hong Kong’s autonomy.”

Hong Kong’s leader, Carrie Lam, has repeatedly said she is simply trying to close a legal loophole and that requests would be considered on a case-by-case basis.

The bill could apply to anyone in Hong Kong – even foreigners simply transiting through, regardless of their citizenship, and that could put some of the 100,000 Australians living in Hong Kong at risk.

Under the “one country, two systems” framework first formulated by Deng Xiaoping in the 1980s, the preservation of Hong Kong’s legal system was one of the fundamentals agreed upon by the British and Chinese governments, when the handover occurred in 1997. But now, many fear that is no longer the case and that China’s government will manipulate charges to target dissidents and political opponents.

“We know that China is very effective at crafting reasonably justified criminal offences against individuals who it views as being critical of the state,” Hong Kong University law lecturer Sharron Fast said.

“We do not have assurances on how Hong Kong courts will deal with the political motivations of Beijing on these issues.”

Critics of the bill have been quick to point out how the differences in Hong Kong’s legal system compared to that of the mainland could put Hong Kong nationals and foreigners at risk.

“Until the Chinese government is able to prove to us that its criminal justice system does not arbitrarily detain individuals, that there are fair and transparent judges, that the use of torture is not endemic… until all of these assurances are met, Hong Kong cannot in good faith extradite individuals to China,” Ms Fast said.

“China has a record of prosecuting individuals for speaking out on matters such as independence or criticising the Communist Party. So it’s a definite risk for people in Hong Kong to be able to speak freely.”

Free speech has become a fundamental part of Hong Kong’s identity – apart from Macau, Hong Kong is the only place in Chinese territory which can openly commemorate events like the Tiananmen Square massacre.

Many believe the reason for the turnout was not just because it was the 30th anniversary of the massacre – but because people wanted to send a message of defiance to the governments of China and Hong Kong.

“The temperature has been turned up little by little,” Mr Richburg said.

“People are slowly becoming aware that the freedoms they’ve enjoyed are gradually being eroded.”

China Looks to Disqualify Xi Doubters Ahead of Crucial Congress

Politics editor - 21/03/2017
0
Holding a foreign passport or expressing doubts about Communist Party policies are among the behaviors that could get candidates disqualified from 2,300 coveted seats...

Beijing fears what Hong Kongers are fighting for

hong kong editor - 03/09/2019
0
It was the first day back to school for students, but classrooms in Hong Kong schools and universities were mostly empty on Monday September...

Guo Wengui: Hong Kong must keep on fighting as CCP shall never be trusted

Business editor - 26/07/2018
0
For Facebook, success in China was brief. Very brief. For several hours, a Chinese government database showed that Facebook had gained approval to open a subsidiary in...

Guo Wengui editor - 31/08/2017
0
HNA Group Co.’s financing costs more than doubled during the first half of the year, signaling the conglomerate’s $45-billion-plus acquisition spree since 2015 is...

taiwan editor - 19/12/2020
0
A crowd yesterday marched in Taipei to rally support for US President Donald Trump and show opposition to the Chinese Communist Party. At the parade...

Robbers armed with tear gas attack and mug 40 Chinese tourists as they shop...

Travel editor - 05/11/2017
0
A group of 40 Chinese tourists was attacked and robbed in Paris by four suspects armed with tear gas, according to China's embassy. The tour group...

Italy and Germany must taste the bitter fruits for signing up cooperation with the...

News editor - 13/03/2019
0
Italy has announced its decision to sign a memorandum of understanding with communist China to join the Belt and Road Initiative linking economies of...

chinese communist party editor - 08/09/2020
0
CCP General Secretary Xi Jinping Tuesday presented medals to recipients of the Medal of the Republic and the national honorary title for their outstanding...

Trump to meet China’s Xi in Florida next week

World editor - 31/03/2017
0
China has confirmed the dates of President Xi Jinping's trip to the US to meet his counterpart Donald Trump. They will meet at Mr Trump's...

US china editor - 25/08/2020
0
Editorial Note: The CCP spent over a month to prepare a long list of Fack Check on recent remarks and activities of US Secretary...

Business editor - 20/07/2018
0
China this month recorded one of its biggest corporate-debt defaults yet, with the downfall of a coal miner that had ridden the country’s wave...