The Nobel laureate and democracy icon Liu Xiaobo has been cremated in north-eastern China, Chinese authorities have announced, amid growing fears for the safety of his wife, Liu Xia.

Speaking at a press conference in the city of Shenyang, where Liu died, government spokesperson Zhang Qingyang said his cremation had taken place at a local funeral parlour following a “short mourning service” early on Saturday morning.

“Liu’s body was cremated … in accordance with the will of his family members and local customs,” China’s official news agency, Xinhua, said in a brief dispatch.

Xinhua claimed that both family members and friends had attended the dissident’s funeral – although friends and supporters have said they were barred from travelling to Shenyang by Chinese security services.

The spokesman told reporters Liu’s wife, the poet and photographer Liu Xia, had been in attendance and had been given her husband’s ashes. She was in “very low spirits,” he added, according to AFP.

Propaganda photos released by Chinese authorities showed mourners, including Liu Xia, gathered beside a casket that was ringed by pots of white chrysanthemums. Above what appeared to be the dead activist’s corpse a black banner read: “A farewell ceremony for Mr Liu Xiaobo”. Officials said Mozart’s Requiem was played.

As the revered democracy activist was cremated, friends of the couple said they were growing increasingly concerned about the well-being of Liu Xia. The 56-year-old has been living under heavy surveillance and in almost total isolation since her husband won the Nobel prize, in 2010, and had hoped to leave Chinaalong with Liu Xiaobo before his death.

“We have lost touch with her now for three full days,” Jared Genser, a US human rights lawyer who represents her and her late husband, told the Guardian. “I’m incredibly concerned about her health and welfare.” 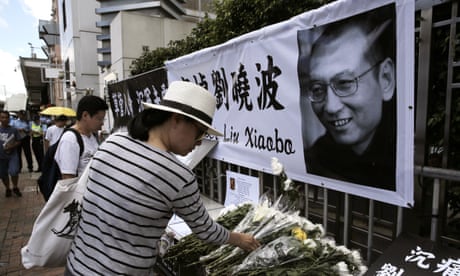 China News Service, a Communist party-controlled news agency, claimed on Friday that Liu Xia was “a free woman” who was deliberately shunning her friends and relatives because she wanted to grieve in peace.

Zhang, the government spokesman, repeated those claims on Saturday as Liu’s cremation was announced. “Liu Xia is free,” he said, according to Reuters, without revealing her whereabouts. “I believe the relevant departments will protect Liu Xia’s rights according to the law,” Zhang added.

According to AFP, Zhang claimed Liu Xia was “emotionally grieving” and did not want “too much outside interference”.

Genser rejected claims that Liu Xia was free as “a sick joke”.

“It leaves me incredulous to think that the Chinese government would think that anybody would believe such a claim: that she is grieving and does not want to be disturbed. I mean, come on. That is just totally ridiculous.”

Genser added: “We all know the truth. The truth is clear as day. She has been under house arrest without charge or trial for seven years and even after her husband is dead that appears not to be good enough for the Chinese government.”

Meanwhile friends contradicted official claims that Liu Xiaobo’s friends had been permitted to attend his funeral. Activist Hu Jia said he did not know of a single friend who had been able to go.

Shang Baojun, a Chinese lawyer who represented Liu Xiaobo and was his friend, said he had not attended the funeral. “I know nothing about it,” he said by phone, before explaining that it was “not convenient” to talk – a common expression in China indicating that someone is coming under pressure from authorities to stay silent.

Writing on Twitter, Mo Zhixu, another activist and friend, said he had not recognised any friends of the Lius in the photographs released by the government. “The party-state cannot even be bothered to be halfhearted about their acting in this play,” he wrote.

The Global Times, a Communist party controlled tabloid, chose to mark Liu’s cremation with a vicious personal assault. “He was paranoid, naive and arrogant,” the newspaper said in an English-language editorial. “Chinese society opposes and despises him.

“Deification of Liu by the west will be eventually overshadowed by China’s denial of him,” it added, branding the Nobel laureate “a disruptive player to China’s development theme”.

Genser called for international pressure to help Liu Xia “escape this Kafkaesque nightmare that has been her life”.

“My heart breaks for her. It is just terrible. We have to get her out. We can’t live in a world in which she is not free,” he said.

By Tom Phillips
Additional reporting by Wang Zhen
The Guardian

News editor - 29/05/2019
0
Wang Qishan will find himself looked as an infected rat running across the streets in Europe as most western leaders would avoid meeting him...

Society editor - 07/09/2017
0
Chinese social media users are reacting with shock and horror after a heavily pregnant woman killed herself, reportedly after her family refused to let her have...

Society editor - 01/10/2017
0
Thousands of people took to the streets of Hong Kong Sunday (Oct 1) to mark China's national day with a pro-democracy rally and voice...

Decisive war engagement is just head of us

News editor - 25/08/2019
0
Now, can the United States go back to what it was two years ago? Will President Donald Trump say one more time “Well, President Xi...

Tiananmen call: China belongs to all Chinese, not private property of the Communist Party

News editor - 07/06/2019
0
The 30 anniversary of Tiananmen Massacre was days ago, but discussions on WeChat and other social media are still blocked. Its memory is widely associated...

World editor - 30/08/2018
0
Donald Trump has accused China of scuppering peace talks with North Korea in retaliation for its ongoing trade dispute with the US, threatening to revisit war games with South Korea...

Society editor - 09/07/2020
0
Heavy downpours continued to wreak havoc across vast stretches of China on Wednesday as the country renewed its alert for rainstorms and multiple provincial-regions...

U.S. will soon define the CCP as a transnational criminal organization

US china editor - 12/12/2020
0
Abstract: This article introduces the background and reasons for the U.S. defining the CCP as a transnational criminal organization and the impact it will...

Art & Entertainment editor - 17/11/2017
0
CHINA has revoked Katy Perry’s visa meaning she can no longer perform at the Victoria’s Secret show in Shanghai — and you won’t believe...

China calls for restraint after ballistic missile fired over Japan

World editor - 29/08/2017
0
China has urged restraint from all sides after North Korea fired a ballistic missile over Japan that landed in the Pacific, prompting warnings to residents...

News editor - 19/11/2020
0
Another day, another Rudy Giuliani conference — and though this one wasn’t sandwiched between a crematorium and an adult bookstore, it didn’t disappoint in terms of...

Art & Entertainment editor - 10/05/2019
0
Actress Zhang Ziyi has been named “Godmother” of the 19th annual Trophée Chopard 2019 at Cannes Film Festival. As godmother, Zhang will present the award to both...

Society editor - 22/05/2017
0
CSIRO's re-embracing of climate change research will be underlined on Monday when the national science agency announces a new centre partly funded by Chinese interests. Based...

Business editor - 28/02/2017
0
People who are used to receiving purchases through express services have found some goods cannot be delivered in the face of a new regulation...

Art & Entertainment editor - 11/07/2017
0
To tap into the Chinese cruise market and its estimated 83 million passengers, the world’s largest cruise company has launched a new ship built...

The U.S. Is About to Do Something Big on Hong Kong

hong kong editor - 16/09/2019
0
Hong Kong’s pro-democracy protest movement, the David to China’s Goliath, is calling out to the land of the free for help—and help may be...