(CNN)She may be petite, but Zhang Hexian can pack a punch.

It’s one of the many martial arts moves she’s mastered in her 89 years of practicing kung fu. The 93-year-old grandmother recently became a social media sensation in China after photos of her practicing kung fu went viral.
For Zhang, kung fu has been a part of her life for almost as long as she can remember.
“I started when I was four years old,” she tells CNN. “It’s my family tradition that has lasted more than 300 years.” 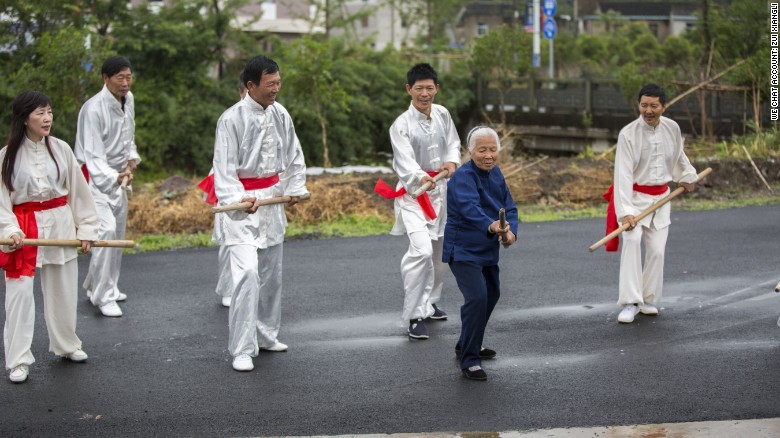 Zhang Hexian teaches her moves to others in her village
Zhang, who lives in China’s southeastern Zhejiang province, says all her family members have learned kung fu, which instills discipline and strength. She recalls how she’d wake up in the morning and start practicing in bed whilst the covers were still over her.
“I was born in 1924, at a time when China was at war with other countries,” Zhang says. “So (kung fu) was also a good way to learn self defense.” 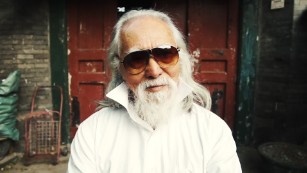 China’s 80-year-old model 01:55
The type of kung fu Zhang practices originates from Fujian province and encompasses 15 different styles.
Each style has about 36 moves. She says it takes about three years to fully learn one style. Zhang has mastered all of them — but recalls the hardest part was at the very beginning.
“Most difficult was learning to squat firmly, because it made my muscles so sore,” Zhang says. “I remember being so sore, I couldn’t even go to the bathroom. And we were a poor family, so after practicing I’d be starving and we’d have nothing to eat.”
Despite that, Zhang stuck with the practice every day, even well into her golden years — waking up every morning at 5 a.m. to exercise. Her favorite type of kung fu involves using bamboo sticks to fight an opponent.
Zhang gets up at 5 am everyday to practise.
She credits kung fu, plenty of sleep and a healthy diet of mainly vegetables and a little bit of meat for keeping her healthy, pointing out that she’s never had to go to the hospital.
“To have good body, you need to exercise and keep a positive attitude,” she says. “It’s also important to help others as often as you can.”
Many of Zhang’s family members have moved away over the years, so they don’t often get together to practice kung fu. Zhang filled the void by teaching her neighbors.
The style of kung fu Zhang practises is from Fujian.
RELATED: Kung fu hustle: How to master martial arts in China
And of her new found internet fame, Zhang remains quite modest.
“I never thought about being famous,” she said. “If people love kung fu, my family can teach them. We have been teaching people around here — but I never imagined we’d get the attention of others around the world.”
By Chieu Luu and Nanlin Fang CNN

World editor - 27/06/2020
0
On June 29, Australia will probably overlook an anniversary it would rather forget. Five years ago this month, Australia broke ranks with the United...

Warnings of a ‘chance of war’ between India and China as nuclear rivals face...

World editor - 16/07/2017
0
ASK most people to name a current crisis between nuclear armed states and North Korea and the US’ rapidly worsening relations would come to...

US china editor - 24/11/2020
0
The Trump administration is close to declaring that 89 Chinese aerospace and other companies have military ties, restricting them from buying a range of...

One-child policy: A look inside the struggles and benefits of China’s ‘little emperor’ generation

Society editor - 03/02/2018
0
I remember growing up and being told by my mother over and over again that I was her "only hope". Key points: China's one-child policy...

Society editor - 30/08/2017
0
China's home prices in 2017 are likely to rise more than previously estimated despite a flurry of government curbs to crack down on speculation,...

China is taking digital control of its people to chilling lengths

Society editor - 27/05/2018
0
Watching Donald Trump trying to deal with China is like watching a clown dancing in front of an elephant. The US president’s entire approach is transactional –...

Academics Around the World Write to Xi Jinping: Give Freedom of Speech Back to...

News editor - 26/02/2020
0
This open letter was initiated by professors Andrew Nathan, Perry Link, and Zhang Lun. Please join them, as many of their colleagues have done,...

The world should look to Malaysia and ask why Mahathir just bans foreigners from...

Is Xi Jinping’s blockchain a technology opportunity or another gamble to cut leeks?

Money editor - 30/10/2019
0
Over the past week or so, blockchain has hit many headlines in the media, not just in China. People are talking that the Communist...

human rights editor - 23/06/2018
0
Last year, when Almas Nizamidin returned to Urumqi — the capital city of China's far-west region of Xinjiang — he was on a mission...

US china editor - 13/01/2021
0
U.S. State Secretary Michael Pompeo tweeted today that he is to step aside as Secretary of State in a week. Before Pompeo leaves, he went...

Risk is rising that all of imports from China could be hit with US...

Trade editor - 24/09/2018
0
Goldman Sachs said the odds of the US imposing tariffs on all Chinese imports were 60 percent as trade tensions between the two...