The long running trade war between the US and China has spooked global markets and provided much fodder for the broadcast media of both countries. It will now be the topic of a much-anticipated debate today between Fox Business Network host Trish Regan and TV anchor Liu Xin of the China Global Television Network (CGTN). The debate pits the right-leaning network, a favorite of president Trump, against the international arm of China’s state-run broadcaster, CCTV.

Liu and Regan have been in a public back-and-forth on Twitter for about a week. The dispute started with Liu suggesting that the Fox presenter needed “a better research team” after Regan claimed that China stole $600 billion worth of intellectual property a year from the US. Regan eventually invited Liu to debate the topic, and Liu accepted on the condition there would be no “mud throwing.” “Don’t worry—I don’t sling mud, I sling facts,” Regan responded.

Here is your guide to watching the debate: 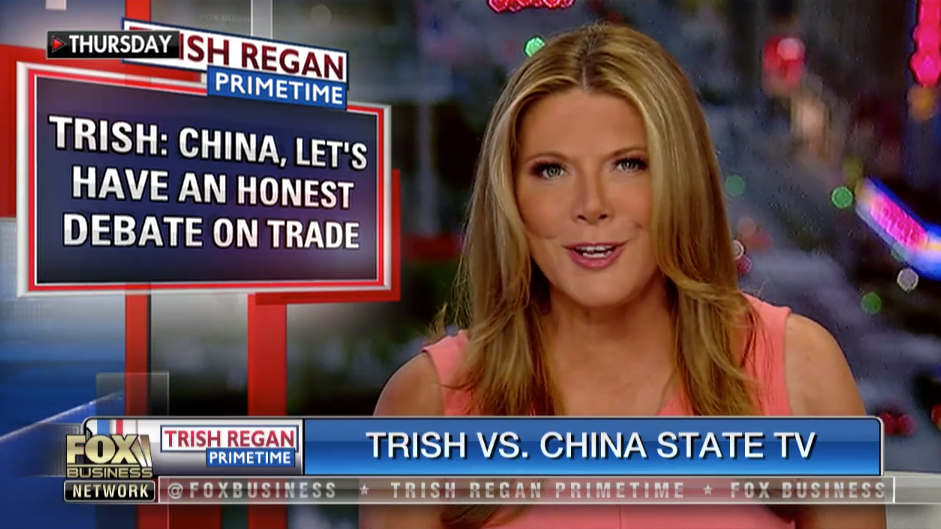 The debate will be broadcast on the Trish Regan Primetime show, which airs on the Fox Business Network, at 8pm US eastern time tonight (May 29)—8am the following day (May 30) in Beijing. Fox Business is also providing a free livestream  Liu will attend via satellite link from Beijing. She has tweeted that CGTN can’t air the debate live due to “rights issues,” but that that the outlet will follow and report on it closely, including posting updates on its Twitter account. (Update, May 30: Now that the debate has aired, you can watch the show here.)

Chinese viewers will have a trickier time watching the event. Foreign news channels are not common outside luxury hotels (paywall) catered to international visitors. They can watch a livestream of the debate on Fox News Go, but will need a VPN to do so.

A healthy number may do so, based on the intense interest in the Chinese hashtag, “[Fox] female anchor proposes debate after being accused by CCTV of being emotional.” The New York Times reports the hashtag has been seen by well over 100 million people on Chinese social platform Weibo.

A bit of biography

Liu joined CGTN after graduating from university and is one of the network’s most prominent correspondents. She is known as a champion of a more self-assured and assertive China (paywall), and has criticized foreign media for its coverage of the country.

Regan joined Fox Business in 2015 after stints at CBS, CNBC, and Bloomberg Television. She has railed against socialism and drew sharp criticism (paywall) last year when she compared the “bleak nation” of Denmark, a rich, developed country, to Venezuela, a country grappling with a humanitarian crisis.

China has invested a lot of money into expanding its media presence abroad. The debate could help raise the network’s visibility in the US, and authorities in Beijing have encouraged people to tune in. “You know, in China we have a saying: The truth becomes clearer through debate,” Lu Kang, a foreign ministry spokesman told reporters when asked about the face-off.

What is the US preparing to surround Communist China?

Highlights from live broadcast of Guo Wengui with Steve Bannon

Guo Wengui editor - 09/10/2019
0
On Hong Kong waters, floating bodies of young girls were again found. Such a terrifying tragedy! But the police have been working hard to...

human rights editor - 28/07/2019
0
We started from Beijing by train and arrived at a small station Chadian in the North East. We were told to get off the...

hong kong editor - 04/12/2020
0
The United States is appalled by the Hong Kong government’s political persecution of Hong Kong’s courageous pro-democracy advocates. The use of courts to silence...

A spectre is haunting China as President Xi stresses ideological and political education in...

News editor - 19/03/2019
0
The communist ghost is haunting China as President Xi Jinping on Monday, presiding over a symposium in Beijing for teachers of ideological and political theory,...

Business editor - 04/10/2017
0
An Indian-American dealmaker for HNA Group, who recently held a big stake in the Chinese conglomerate, said he kept the shares for a decade as...

Society editor - 15/12/2017
0
A Chinese university has banned Christmas celebrations in an effort to protect young people from what it calls the "corrosive" influence of Western culture. China’s Global...

Believe in the motherland, China’s leader tells Hong Kong people — and respect its...

Society editor - 02/07/2017
0
China staged the territory’s largest military parade ever Friday for the benefit of visiting President Xi Jinping — and as a none-too-subtle reminder to...

In China, A Cashless Trend Is Taking Hold With Mobile Payments

Money editor - 30/06/2017
0
People in China have been paying cash for things for thousands of years, long before other civilizations. Now, increasingly, they're paying with their cellphones. So...

World editor - 20/12/2017
0
China's embassy in Canberra has taken the rare step of issuing a public safety warning for Chinese students living in Australia due to "a...

World editor - 09/11/2017
0
President Donald Trump refused to take questions during a joint appearance with Chinese President Xi Jinping, breaking with a precedent set by the past...

Featured editor - 09/01/2017
0
Chinese state media has warned the US against deviating from the one-China policy, hours after the Taiwanese leader stopped briefly in Houston. Tsai Ing-wen met...