Rescue workers in southwestern China pulled bodies out of piles of rock and mud on Sunday as they searched for 93 people missing after a landslide buried a mountain village, with some residents giving up hope of finding survivors.

A huge landslide crashed down on the village of Xinmo, in mountainous Sichuan province, as dawn broke on Saturday.

On Sunday industrial excavators removed rubble at the site of the landslide while workers in hard hats searched for signs of life as relatives of the lost cried or looked on stone-faced nearby.

“This is useless,” villager Han Jianying, searching for missing family members, told Reuters. “Everyone’s going to be in pieces anyway.”

More light showers are likely but are not expected to affect the search, state broadcaster China Central Television reported.

A couple and their two-month-old baby were the only survivors reported to have been found alive. Authorities reduced the number of missing after 15 people were confirmed as safe, the Xinmo village propaganda department said on its microblog. 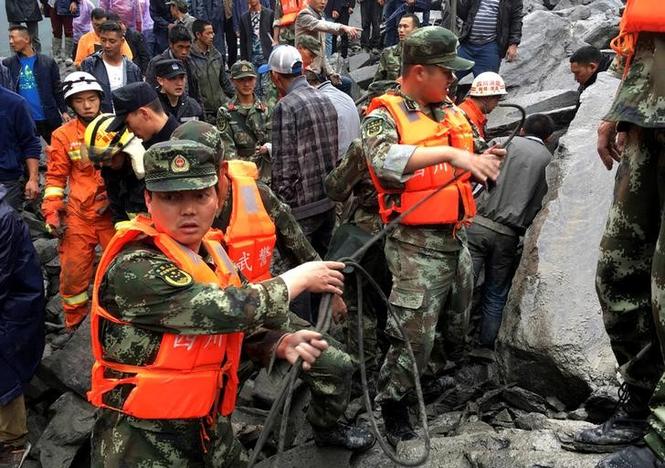 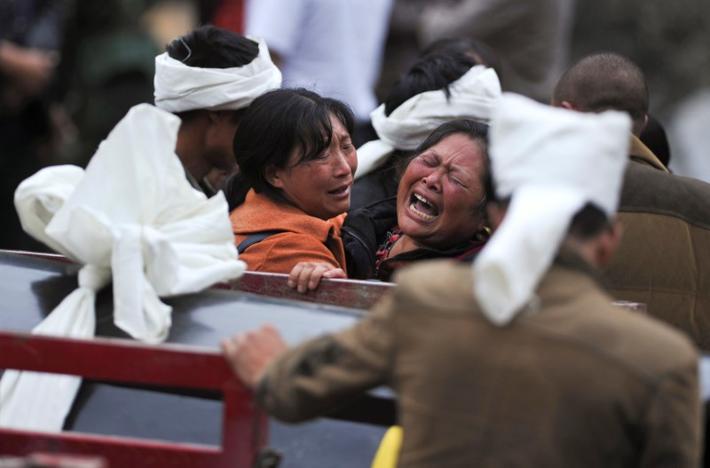 It was not clear if the 15 had been rescued or had simply been away at the time of the disaster.

The rescue involved more than 3,000 people despite the danger of more landslides, Xinhua reported.

Geological experts said the chances of anyone surviving under the rubble were slim, Xinhua reported.

“We weren’t able to pull anyone out alive,” said Wu Youheng, who lives in a neighboring village and rushed to help on Saturday.

“We pulled out two people but they were already dead. I think it’s too late, they’re unlikely to find anyone else alive.”

The area is prone to landslides but the scale of Saturday’s slide was unprecedented, Wu added.

Wu’s wife, Zhang Xiaohong, said they often sleep in other villages for fear of landslides but could not afford to move to a safer part of Mao county.

County residents are primarily poor farmers of the Qiang ethnic minority and the area is the target of a poverty alleviation project, government officials said.

Much of those efforts focuses on attracting tourists to nearby scenic spots and an ancient village. Xinhua reported that all 142 tourists in the area had been evacuated from the area.

The names of the missing were posted on government websites.

U.N. Secretary-General Antonio Guterres, in offering his condolences, said in a statement that the United Nations is prepared to offer any support.

Sichuan province is prone to earthquakes, including an 8.0 magnitude tremor in central Sichuan’s Wenchuan county in 2008 that killed nearly 70,000 people.

For a graphic on the landslide in China, click: here

News editor - 17/08/2019
0
A second pro-Hong Kong rally has been held in Melbourne’s CBD after clashes with Chinese nationalists on Friday night sparked a police warning that...

Society editor - 28/09/2017
0
High-level meetings in China are typically accompanied by a security crackdown - as well as uncharacteristically smog-free blue skies - with the stability-obsessed party...

Mark Zuckerberg’s China dilemma: To kowtow or not?

Business editor - 03/10/2017
0
The axe seems to have finally fallen last week in China on Facebook’s instant messaging service, WhatsApp. Just like every other major product of...

Do not cave to China on trade: Australia government MPs hold strong line

World editor - 06/11/2020
0
Australia must not cave to trade threats from China by sacrificing its principles in the hope of boosting export earnings, federal government MPs have...

hong kong editor - 15/06/2019
0
Hong Kong Chief Executive Carrie Lam announced Saturday her government has decided to suspend the proposals to the Extradition Law and said she had...

Beijing editor - 15/06/2020
0
China's vice premier Sun Chunlan is calling for "decisive measures" in Beijing as the capital moves to mass coronavirus testing after a spike in...

Lifestyle editor - 08/06/2017
0
This week, students across China will sit the gaokao—”life’s most important test”—a two-day college entrance exam that can arguably make or break one’s chances...

The Billionaire Gadfly in Exile Who Stared Down Beijing

corruption editor - 30/05/2017
0
The biggest political story in China this year isn’t in Beijing. It isn’t even in China. It’s centered at a $68 million apartment overlooking...

Only the most evil government would threaten its own people with armed forces, says...

Politics editor - 07/04/2017
0
Chinese President Xi Jinping has arrived in Florida for a high-stakes summit with US President Donald Trump. His plane landed at West Palm Beach where...

Society editor - 07/06/2018
0
A crisis over a mysterious ailment sickening American diplomats and their families — which began in Cuba and recently appeared in China — has...