On Thursday night, Hong Kong protesters reveled in irreverence as they marched in a city-wide Halloween masquerade, dressing up in defaced masks of unpopular leaders in spite of the city’s controversial mask ban.

Early in the evening, some 100 masked protesters wearing masks of Yoda, Joker and Guy Fawkes assembled into a park to pose for photos and repeat their demands as pro-democracy protests push on into their fifth month.

As the parade kicked off, the masked revellers streamed out of the park heading west to Central’s party neighbourhood, Lan Kwai Fong, famous for its bustling bar scene and rowdy Halloween celebrations, chanting “Free Hong Kong, revolution of our times!”

When asked about his Winnie the Pooh mask, a 36-year-old protester named Edward who works in marketing said: “Because everyone loves Winnie the Pooh. And because one person hates it very much,” referring to Chinese President Xi Jinping, who is often derisively likened to the cartoon.

“Basically, this is Hong Kong’s last stand,” said Edward, who like many protesters declined to give his full name for fear of retribution from authorities. “We want government accountability. We want police accountability. It’s not happening. We have to keep on coming out until they listen.”

“If we don’t come out there will never be a chance for us to come out again.”

‘It’s our freedom to wear masks’

But the prohibition, punishable by up to a year in prison and a $25,000 HKD  ($3,190) fine, only fuelled public anger and immediately drew more people to the streets in masks, which protesters use to protect their identities and themselves from tear gas.

“It’s our freedom to wear masks,” said a 27-year-old protester in a fox mask. “The police themselves are wearing them. There are such double standards.”

He added: “Tonight we are going to this mask parade to have a little bit of fun or at least try to have some fun in these difficult times.”

“It’s permissible to wear masks and make up to celebrate Halloween,” Hong Kong police said in a video. “However under section 5 of the ‘Prohibition on Face Covering Regulation,’ police officers are empowered, if necessary, to ask anyone in a public place to remove their face masks and facial coverings or to wipe off their face paint to verify their identity.”

“There are no ‘defences’,” the officer added. “Everyone must comply.”

But as masked protesters packed into the hub with hundreds of riot police and costumed partygoers, enforcement seemed to flummox police, leading to a protracted stand-off and multiple warnings to disperse before eventually ending with police firing tear gas on the main drag.

Just a block away on the fringes of the protests, Halloween celebrations continued as normal in a bizarre melee of beer-sipping expatriate Halloween partygoers and Guy Fawkes demonstrators holding signs saying “ideas are bulletproof.” 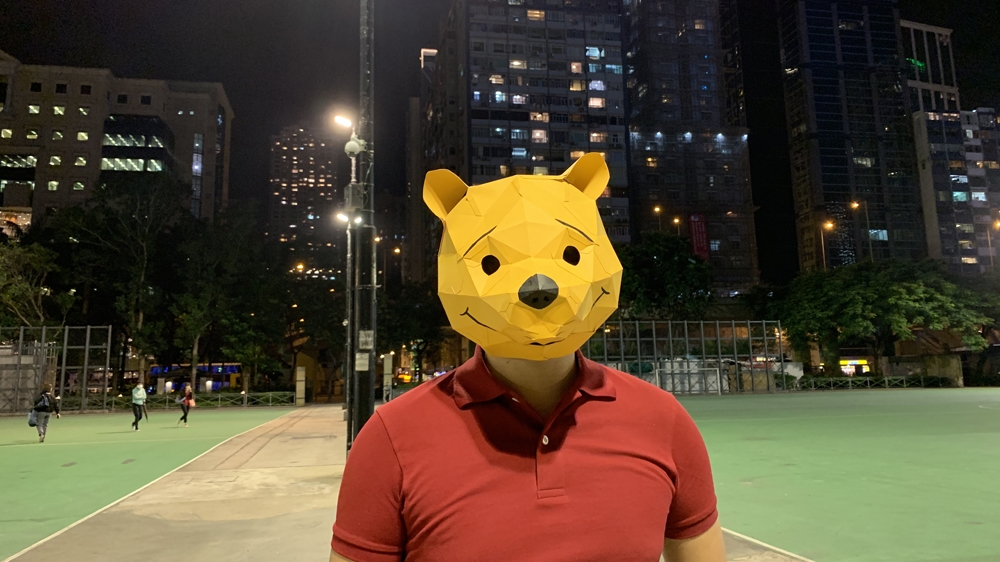 Hong Kong has been engulfed by protests since June. They began over a now-shelved extradition bill and morphed into a wider movement against Chinese interference into the semi-autonomous territory.

“It’s good to see people question authority. All this facial recognition stuff is too Orwellian,” said Jamie Ling, 30, a glass seller visiting from London, referring to fears of surveillance in Hong Kong. “This shows you what people can do together. It’s a good thing to see.”

“They have the right to do this,” echoed friend Loic Hui, 29, a London-based stock controller for fashion visiting family in Hong Kong. “They need to this for their future.”

Bars were also bracing for impact on one of Lan Kwai Fong’s most popular nights.

“As long as they’re not violent, we’re happy to welcome them,” said Ethel Lumbera, 40, head in charge of the Cali-Mex bar, before the festivities began. “We’re crossing our fingers that everything is going to be peaceful. We don’t know who is who. We are hoping no violence is going to happen. For us, it’s business as usual.”

Thursday also coincided with the two-month anniversary of a controversial police storming of metro station in Prince Edward, which saw some of the worst police violence used against protesters.

Early in the day, people decorated the station’s exterior with white flowers. The station was closed at 2pm. Police fired tear gas later in evening following clashes with protesters.

“We want to say that we have the freedom of celebrating and protest and speech,” said Ken, a 25 year old designer in a flashing LED skull mask.

“Unless they give us freedom, we can’t take off our masks.”

Remarks by President Trump on the Killing of Qasem Soleimani

World editor - 04/01/2020
0
Editorial Note: The Communist Regime in China has hoped for the swift of public attention from the Hong Kong crisis and its domestic problems...

Wrestling and developments: things are linked together

News editor - 08/08/2019
0
Latest tweets from President Donald Trump on China Donald J. Trump‏认证账号 @realDonaldTrump 8月6日 Massive amounts of money from China and other parts of the world is pouring into...

Guo Wengui: The world has opened eyes to CCP crimes in Hong Kong

Money editor - 11/09/2017
0
Chinese authorities plan to shut down domestic bitcoin exchanges, delivering a final blow to a once-thriving industry of commercial trading for virtual currencies, which...

Lifestyle editor - 08/12/2020
0
Nine Entertainment has quietly dropped an arrangement with China Daily to carry an eight-page Communist party newspaper each month in the Sydney Morning Herald,...

World must ‘wake up to the challenges presented by China,’ says US Defense Secretary

Military editor - 15/02/2020
0
Defense Secretary Mark Esper called on the international community to "wake up to the challenges presented by China," telling an audience of world leaders and...

Business editor - 27/07/2017
0
Baidu Inc said on Friday that it has entered a strategic agreement with PayPal Holdings Inc to tap overseas merchants as Chinese tech companies...

US china editor - 16/05/2020
0
The U.S. ambassador on the spot in an Asian economic powerhouse put it bluntly in a cable to the secretary of state in Washington:...

Business editor - 01/06/2018
0
ZTE, the Chinese telecommunications company bidding for major contracts in Australia, and at the centre of Donald Trump’s trade war with Beijing, was established...

Art & Entertainment editor - 27/08/2017
0
After a long six weeks during which the Chinese market was cordoned off from imports, this was the frame that marked the return of...

The U.S. Trade War with China Has Reached a Dangerous New Phase

Trade editor - 02/06/2018
0
Not so long ago, U.S. leaders predicted that economic development and the birth of a middle class in China would inevitably move that nation...

Economic development still first important in China: may not be all good