Hong Kong: The most visible face of Hong Kong’s peaceful variety of protest marches, Jimmy Sham, was left on a road in a pool of blood after being attacked by men with hammers on Wednesday night.

Sham, 32, convenor of the Civil Human Rights Front, was treated by ambulance officers for serious head wounds before being taken to hospital. Police closed the road at the scene of the attack in Mong Kok.

Sham had been on his way to a meeting of the Civil Human Rights Front, to organise a protest march planned for Sunday. Earlier marches in June had attracted 1 million and 2 million people, and the group has distanced itself from more recent violent tactics by a smaller group of frontline protesters.

Hong Kong chief executive Carrie Lam abandoned attempts to deliver her annual policy address to the Legislative Council earlier in the day, after being heckled by pro-democracy politicians.

Lam instead released her speech, and a pledge to improve access to housing, in a video. But as the chaotic scenes unfolded inside the parliamentary chamber, protesters largely stayed off the streets on Wednesday.

Big numbers were instead expected at the Sunday march, for which the Civil Human Rights Front was seeking police authorisation.

The group’s co-convenor, Figo Chan, said outside Kwong Wah hospital that Sham had been attacked by four to five men at 7.30pm.

People working at a nearby garage had tried to intervene and stop the attack but were threatened by the assailants with a knife.

The attackers fled in a seven-seat vehicle. Police said they were still searching for the car.

Sham had been wounded in the head, hands and feet and was taken to hospital for emergency treatment, his group said.

Masked men had also attacked Sham in August in a restaurant but a friend had intercepted their blows and been hospitalised instead.

Another six democracy figures have since been attacked on the street by masked assailants or suspected hired thugs, including Democratic Party legislator Roy Kwong and a university student leader, Davin Wong, who has since fled Hong Kong fearing for his family’s safety.

“It is not hard to link this incident to a spreading political terror in order to threaten and inhibit the legitimate exercise of natural and legal rights,” said the Civil Human Rights Front in a statement.

Pro-democracy politicians gathered outside the hospital where Sham was being treated. He arrived in an ambulance with his head bandaged and wearing an oxygen mask.

Sham is seeking political office in District Council elections in November, among a large number of pro-democracy candidates who will try to convert the summer of street protests into votes. 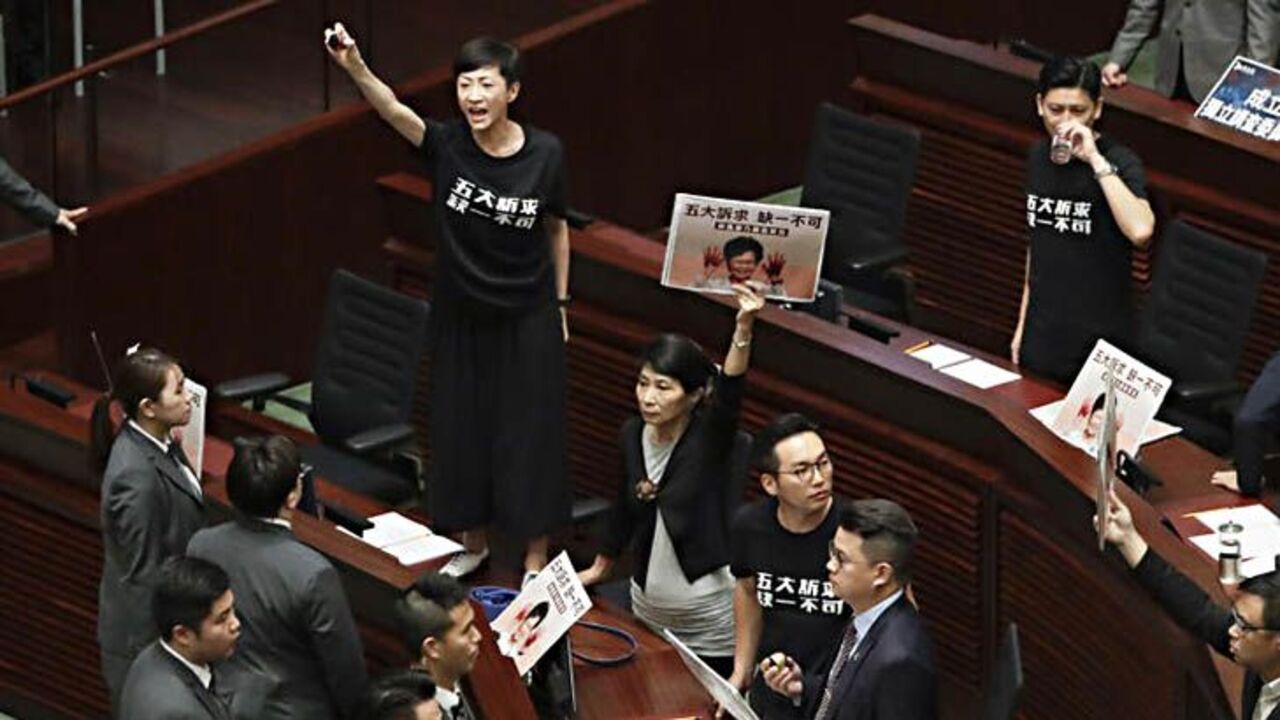 Hong Kong leader Carrie Lam was forced to halt her annual policy address after some lawmakers disrupted the session, shouting and jeering “five demands, not one less” as Lam started her speech.

Many had their political views queried by returning officers this week, with Thursday the deadline for candidates.

Candidates who openly support independence for Hong Kong can be disqualified.

Several had been asked to explain why they had made social media references to the popular protest slogan “Liberate Hong Kong, Revolution of our Times”.

Video taken at the scene of the attack showed Sham slumped on the ground covered in blood as ambulance officers arrived.

His colleagues said he was in a stable condition in hospital around 10pm.

Pro-Beijing politician Anne Chiang, who had been involved in a Facebook clash with Sham over his gay identity in July, wrote on Wednesday night that she urged police to investigate his attack.

China’s historical setting and the fate of the Communist Regime

Xi Jinping and Tedros Ghebreyesus: a couple of liars

President Trump says Biden Family gets $1.5 billion from the Chinese...