Hong Kong on Sunday will likely select Beijing’s favored candidate for its next leader who some say will further divide a city where middle class families have become increasingly disaffected by political tension and economic hardship.

The former British colony, governed under a “one country, two systems” arrangement, was promised a high degree of autonomy and the right to select its chief executive when it was handed over to Communist Chinese rule in 1997.

But on Sunday, 20 years later, only 1,200 people on an election committee stacked with Beijing loyalists will vote for the next leader of the Asian financial hub which witnessed weeks of sometimes violent street protests in 2014 calling for universal suffrage.

Former top civil servant Carrie Lam is widely expected to win, thanks to Beijing’s backing. Former finance chief John Tsang, more popular with the densely populated city’s 7.3 million people, is expected to get around a quarter of the vote.

An evening rally for Tsang on Friday drew thousands who thronged the sidewalks of Hong Kong’s central financial district calling for a populist leader to be elected for once.

“My heart hurts. It really pains me,” said one woman named Leung who works for an NGO. “Why can’t we have a leader who can represent us in Hong Kong? …John Tsang’s manifesto is not perfect, but he can unite us,” she said as crowds waved their mobile phones as in a candlelight vigil.

With Lam’s victory on the cards, some middle class residents see the lack of democracy again fuelling political division and fresh protests, leaving them powerless to tackle livelihood issues such as high property prices and rising inequality.

“The middle class are affected by several problems, the rule of law, governance, housing,” said Nick Chung, a 25-year-old working in the IT sector.

“I think it’s no longer a matter of helping the middle class alone. It’s a structural problem.” 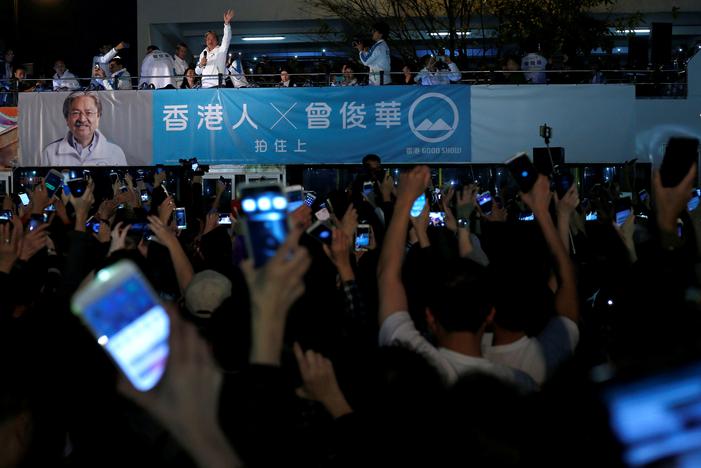 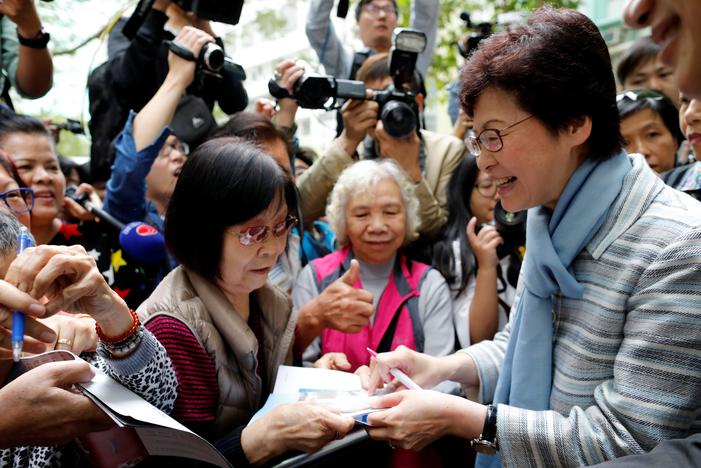 Lam has spoken of unifying Hong Kong as one of her top priorities, but some expect her backing from Beijing to have the opposite effect.

Politicians and insiders say Beijing’s interference in this election has been unprecedented, violating constitutional safeguards of the city’s autonomy.

Mark Pinkstone, a retired civil servant who campaigned for Regina Ip, another former top official eyeing the top job who dropped out of the race, said many election committee members had received phone calls and had face-to-face meetings with Chinese officials who lobbied them to vote a certain way.

Zhang Xiaoming, the head of the Liaison Office in Hong Kong, China’s main representative office in the city, has dismissed accusations of electoral manipulation. The office didn’t respond to a faxed request for comment.

“You see the eventual demise of ‘one country, two systems’, and if the current rate of deterioration continues … it will rapidly become ‘one country, one system,” widely respected former chief secretary Anson Chan told Reuters.

Li Ka-shing, Hong Kong’s richest man, warned this week that the territory’s once humming economy was increasingly being weighed down by political tension.

Li suggested the past five years under staunchly pro-Beijing leader Leung Chun-ying, who took a hard line with the 2014 protests, sending in police to clear the streets after 79 days, had been the most tumultuous since the handover and said there “must not be a repeat” of this for Hong Kong to flourish again.

Annual growth rates for Hong Kong’s $264 billion economy have steadily declined over the past two decades. Last year, fourth quarter growth stood at 3.1 percent year on year, below the median of 5 percent seen over the last 40 years, according to Thomson Reuters data.

While still a low-tax and simple regime for business, the city’s economy remains dominated by developers, lacks cutting edge innovation and is hampered by high costs for commercial and residential property. A regular apartment in Hong Kong now costs around $25,000 per square meter, making the city one of the world’s most expensive alongside New York and London.

The lack of economic opportunity and high costs are helping to fuel a disaffected younger generation clamoring in vain for greater democracy and a more equitable society, driving more talented Hong Kong people abroad in a burgeoning brain drain.

“If I really want a better living standard, of course it needs to be overseas,” said Veronica Chung, a 22-year-old violin teacher.

“When the housing price is so high … it’s impossible to have a high living standard. You get back home from work and you’ll just be facing four walls. You can’t be happy.”

Click tmsnrt.rs/2nLcvnd for graphic on candidates in line for the top job

US releases Report on Military and Security Developments Involving China

Military editor - 01/09/2020
0
The Department of Defense announces the release of its annual report on "Military and Security Developments Involving the People’s Republic of China." The congressionally mandated...

World editor - 03/09/2017
0
BRICS Business Forum, a major side event of the bloc's summit, has kicked off in the coastal Chinese city of Xiamen, with Chinese President...

Business editor - 01/06/2018
0
ZTE, the Chinese telecommunications company bidding for major contracts in Australia, and at the centre of Donald Trump’s trade war with Beijing, was established...

China to pump 1.2 trillion yuan into economy amid panic-slowdown

Business editor - 02/02/2020
0
China is to inject 1.2 trillion yuan ($174 billion) into its economy on Monday as its stock markets prepare to reopen, including providing banks...

The Chinese Fugitive Living In A $67 Million Manhattan Apartment

corruption editor - 20/05/2017
0
“My money is clean. I'm willing to accept everything being in full public view.” After Guo Wengui escaped China, he discreetly paid $67 million in...

World editor - 17/11/2018
0
The trade war, the economic war, the confrontation in South China Sea and possibly an exchange of gunfire across the Taiwan Strait ... This...

Tech editor - 16/06/2017
0
China’s first astronomical satellite, an x-ray telescope that will search the sky for black holes, neutron stars, and other extremely energetic phenomena, raced into...

Beijing editor - 10/01/2019
0
One man spent 15 days in a detention center. The police threatened another’s family. A third was chained to a chair for eight hours...

President Trump says he’s working with China to save ZTE

Dr. Yan’s Report Is Out Today and the White House Is Paying Close Attention...

Torture in secret prisons: The dark side of China’s anti-corruption crackdown

corruption editor - 09/01/2017
0
By James Griffiths The gray, concrete building looms over the street in central Beijing. Completely unmarked aside from a street number, its entrance is buttressed by...

Is China close to a property bubble bust?

Politics editor - 21/08/2018
0
Earlier this week, mayors of five cities Haikou, Sanya, Yantai, Yichang, Yangzhou were summoned to Beijing for questioning by the Ministry of Housing and...