Talk about a U-turn.

On August 18, the Cambridge University Press (CUP), the world’s oldest publishing house, based in the UK, announced that it would purge more than 300 articles from the China-based website of China Quarterly, a leading journal it publishes. This reportedly came after Beijing threatened to take down the site completely unless the essays, mostly about politically sensitive issues, like the 1989 Tiananmen massacre, were removed. At the time, the CUP defended its move by saying it needed to protect other articles and book reviews from also being removed by Chinese censors. Tim Pringle, editor of China Quarterly, was quoted by British media: “This restriction of academic freedom is not an isolated move but an extension of policies that have narrowed the space for public engagement and discussion across Chinese society.”

On August 21, however, the CUP reversed its decision and announced that it would not be taking down the articles, following worldwide petitions and threats of a boycott. As a further thumb in the eye of the Chinese censors, the CUP made many of the articles downloadable for free when they have previously only been accessible to paid subscribers. Reuters quoted one China-based Western academic as saying this was a “big wake-up call” for Western intellectual institutions after more than two years of attacks on academic freedom in China, which has “escalated alarmingly.” 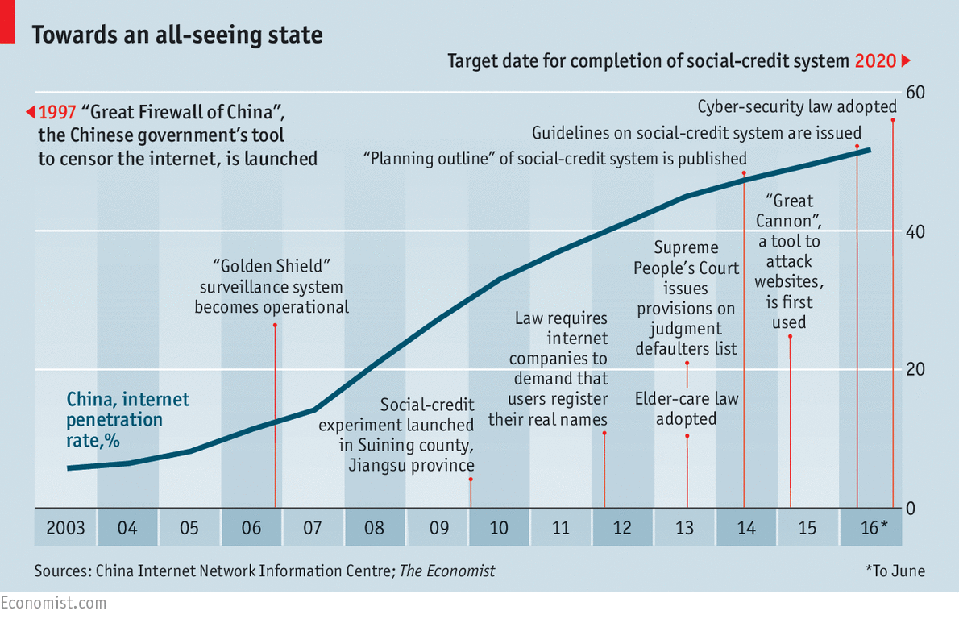 The Economist: As internet penetration increases in China so does state control

The number of Chinese think tanks and academic institutions has swelled in recent years but this hasn’t seen an era of open debate blossom; the opposite, in fact. There are now thought to be 435 think tanks operating in China, the world’s second highest after the United States.  But President Xi Jinping has demanded that local think tanks must be imbued “with Chinese characteristics,” as he described it. Pascal Abb, a Research Fellow at the German Institute of Asian Studies, in Hamburg, put it another way: Think tanks allow the Communist Party to “monopolize the intellectual capital of experts for its own purposes,” he told me.

“What intellectual capacity?” many are left asking. Luo Fuhe, a senior party official, voiced rare opposition to the Party’s censorship in March when he told journalists that Chinese academics have to go to “not normal” lengths to carry out their studies. Indeed, many purchase software to bypass the country’s “Great Firewall” but this still often means certain websites – Luo referenced the UN website, for example – can take as long as 20 minutes to load. He added that by limiting access to international studies China is, in fact, putting itself at an economic disadvantage. One could also add an intellectual disadvantage, as well.

One reason for Beijing’s demand that CUP remove certain articles could be that the ruling Communist Party is preparing for its 19th Congress, to be held later in the year, which some claim could be the country’s most decisive in decades. State control of traditional and online media tends to become more severe as such congresses near but there are reports that President Xi has been particularly strict this year. Moreover, since Xi came to power in 2012 he has sought to embolden Chinese nationalism – the “great rejuvenation of the Chinese people,” his equivalent to Donald Trump’s “Make America Great Again” – and Beijing has sought to play to the CUP incident in terms of nationalism. Before the publishing house’s U-turn, the jingoistic Global Times, a state-run tabloid, gloated over the decision and stated in an op-ed that if publishers don’t like the “Chinese way” they should leave.

The editorial also stated that if Western academic institutions “think China’s internet market is so important that they can’t miss out, they need to respect Chinese law and adapt to the Chinese way.” The CUP’s U-turn, it seems, indicates that reputation was finally put before profit. But it is one of the largest, and most wealthy, publishing houses in the industry and there are some concerns of what might happen if Beijing decides to target a much smaller press.

Academic freedom is precious – so why have UK universities sold out to China?

Chinese students’ applications to UK universities up by 30%

Is China stealing Tech from Europe?