As couples enjoy China’s version of Valentine’s Day on Monday, some businesses are looking to woo a single population that may be unlucky in love but has money to spend.

Alone on Chinese Valentine’s Day? Gift yourself a dried flower. Or better yet, indulge in a cake shaped like a “single dog”. Eating by yourself? A restaurant will sit a teddy bear across from you.

As couples coo over each other during China’s version of Valentine’s Day on Monday, several businesses will woo a single population that may be unlucky with love but has money to spend.

While Valentine’s Day is on February 14 in other parts of the world, China celebrates its version during the Qixi Festival, which falls on the seventh day of the seventh month of the lunar calendar.

Couples go on dinner dates and exchange flowers and cards. And then there are the “single dogs”, as they are nicknamed in China.

Nearly 200 million people are not married in the country of almost 1.4 billion, according to official figures, many resisting family and cultural pressure to settle down.

Businesses have something else for them.

One of the country’s most popular hotpot restaurants, Haidilao, places a teddy bear across from customers who dine alone.

For those with a sweet tooth, the Seven Colour Rainbow bakery makes a cake in the shape of a pooch with his tongue out.

Dubbed “the single dog”, the dessert is 20 percent more expensive than the shop’s more common cake, but it accounts for 15 percent of sales.

“People buy these cakes for their friends as a benign joke,” a staffer surnamed Liu told AFP.

Even US fast food chain Burger King is offering a special discount meal just for singles on Chinese Valentine’s Day: A burger, a fried chicken thigh and a smoothie.

At his flower shop, An Shuai offers singles dried roses encased in glass, which he believes will be a hit on Valentine’s Day.

“People love to celebrate these festivals, and single people can also give flowers to themselves,” An told AFP. 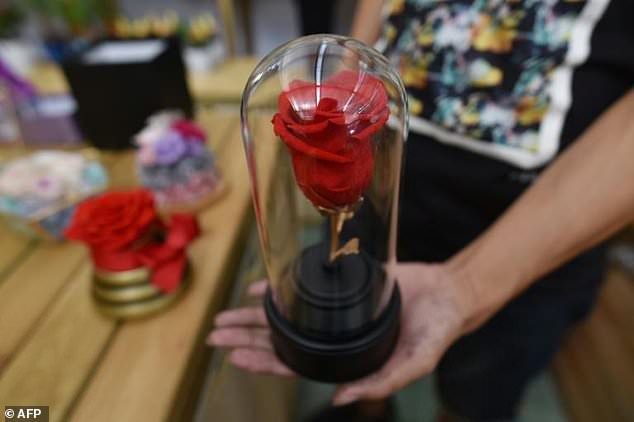 A range of businesses are targeting singles, including travel, dining, online video games, online video streaming, sports apparels and cosmetics, according to Shaun Rein, founder of China Market Research Group and author of the book “The War for China’s Wallet”.

Travel agency Lvmama says the number of bookings for people without a companion rose almost twofold in the first half of the year compared to the same period in 2016, according to the official People’s Daily newspaper.

In the first 11 months of 2016, solo travellers accounted for 15 percent of the millions of travellers monitored by Ctrip, China’s largest online travel agency, according to the Southern Metropolis Daily newspaper.

“More widespread among the young and single population, travelling alone has become a way for people to realise their spiritual pursuit,” Shi Yuduan, chief marketing officer of Ctrip’s tourism business department, was quoted as saying.

“Without the restraint from a relationship or marriage, I can engage more time in personal interests and hobbies and spend more,” Zhou said.

The high-earning urban female population is a major economic player.

Online flower retailer Reflower says almost 80 percent of weekly orders come from female customers, with more than half buying flowers to “comfort themselves”.

“Females who are single especially spend most of their paycheck. Males tend to save more because they want to buy a house later on,” Rein told AFP.

“It’s really being empowered by women, because they are the most optimistic consumers, they tend to have higher paying jobs than men, and they tend to spend more.”

But China is concerned about the accelerating drop in its working age population, a consequence of its declining fertility rate and one-child policy, which was relexed to two in 2015.

The Communist Youth League has started to organise blind dates for young people in an attempt to encourage them to settle down.

In eastern Tianjin city alone, the local league committee has arranged blind dates involving 340 people in four venues across the city for the upcoming Qixi Festival.

“In urban areas especially, parents are saying to their girls ‘don’t settle’. Only marry if you want to marry, only have kids if you want to have kids,” Rein said, adding that the phenomenon is signalling social progress.

“I view that as showing female empowerment… I think it’s a very healthy shift, showing more male-female gender equality than ever before.”

Money editor - 15/09/2017
0
Chinese authorities have ordered Beijing-based cryptocurrency exchanges to cease trading and immediately notify users of their closure, signaling a widening crackdown by authorities on the industry to contain...

human rights editor - 04/07/2017
0
China's latest maneuver in a sweeping crackdown on internet content has sent a chill through a diverse community of filmmakers, bloggers, media and educators...

News editor - 18/08/2019
0
This time, Senator Mitch McConnell played a key role. He used to be a CCP-friendly official. He has finally come to his sense and...

Chinese police order Muslims to hand in all copies of the Koran and prayer...

Religion editor - 28/09/2017
0
Authorities in Xinjiang have ordered Muslim families to hand in religious items Ethnic minority neighbourhoods will face harsh punishment if they are found ...

Business editor - 07/10/2019
0
President Donald Trump must block U.S. financing of the Chinese government by restricting access of American pension funds and other IRS-registered retirement investments to...

News editor - 29/12/2018
0
The Chinese scientist who shocked the world with claims of creating the first genetically engineered babies is being detained in the Chinese city of...

Business editor - 22/10/2019
0
Editorial note: This is absolutely fake news. The following report on the wealth of Chinese is based on fabricated data released by the Chinese...

China’s Dystopian Tech Could Be Contagious

Society editor - 14/02/2018
0
For all the particularities of life in China, its big cities offer a familiar cosmopolitanism. Teenagers giggle over K-Pop videos in a Chengdu Starbucks....

World editor - 28/03/2017
0
China appears to have largely completed major construction of military infrastructure on artificial islands it has built in the South China Sea and can...

Business editor - 21/08/2017
0
Chinese automaker Great Wall Motor Co. told Automotive News it is interested in buying the Jeep brand and has reached out to Fiat Chrysler Automobiles to...

Universities must stand up to Chinese censorship

human rights editor - 27/08/2017
0
Cambridge University Press, or CUP, recently found itself at the centre of a storm of controversy when it tamely acceded to the demands of...

The world needs to hear the voice of truth, says Guo Wengui

Travel editor - 10/10/2017
0
Chinese short-term vacation home rental platform Tujia.com has completed a US$300 million series E round at a valuation of over US$1.5 billion. Existing investors...

Real Estate editor - 20/03/2017
0
A dozen Chinese cities have introduced restrictions on home purchasing and ownership as top policymakers continue to stress the need to fend off the...