Chinese e-commerce sites have removed Dolce & Gabbana products amid a growing backlash over an advertising campaign that has been decried as racist by celebrities and on social media.

The ads, featuring a Chinese woman struggling to eat spaghetti and pizza with chopsticks, sparked criticism from consumers and forced the Italian brand to cancel its Shanghai fashion show.

The situation was compounded when screenshots were circulated online of a private Instagram conversation, in which Stefano Gabbana appeared to make a reference to “China Ignorant Dirty Smelling Mafia” and used the smiling poo emoji to describe the country. The brand said the designer’s account had been hacked. 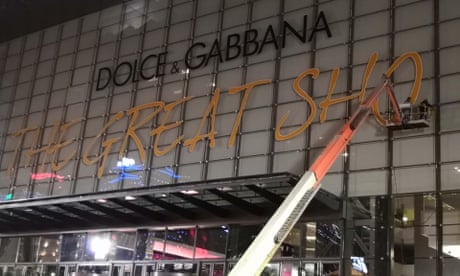 Amid calls for a boycott, the furore threatened to grow into a big setback for the Italian fashion brands in a crucial market, where rivals from Louis Vuitton to Gucci are vying to expand.

In the latest attempt to stem the fury against the brand, Gabbana and Domenico Dolce appeared in a video apology, seated behind a table and addressing Chinese customers directly.

“Over the past few days we have seriously reflected and we are deeply sorry for what our actions and words have brought to Chinese people and the country,” Dolce said. “We hope to seek your forgiveness in the mistake made in our understanding of the culture.”

Gabbana added: “We offer our deepest apologies to all Chinese people around the world. We will never forget the experience and the lessons learned this time, and this kind of incident will never happen again.”

The company previously said the Instagram accounts of the brand and Gabbana had been hacked.

Chinese customers account for more than a third of spending on luxury products worldwide, and are increasingly shopping for these in their home market rather than on overseas trips.

Kaola, an e-commerce platform belonging to the Chinese tech firm NetEase, confirmed it had removed Dolce & Gabbana products, while the luxury goods retailer Secoo said it had removed the brand’s listings.

On Yoox Net-a-Porter – owned by the Switzerland-based luxury goods holding company Richemont – said the label’s wares were no longer available on its platforms within China.

Checks done by Reuters on Thursday morning also showed pages that previously linked to Dolce & Gabbana items on the e-commerce sites hosted by Alibaba Group Holding and JD.com were no longer available and searches for the brand returned no products.

Alibaba and JD.com did not respond to requests for comment, and Dolce & Gabbana did not comment on the retailers’ moves.

Dolce & Gabbana apologised for the ad, saying: “We have nothing but respect for China and the people of China.”

Celebrities including the actor Zhang Ziyi have criticised the brand, while the singer Wang Junkai said he had terminated an agreement to be its ambassador.

The Communist party’s youth league said on Weibo, the Chinese microblogging platform: “We welcome foreign companies to invest and develop in China … companies working in the country should respect China and Chinese people.”

It is not the first time Dolce & Gabbana has caused offence in China. The brand came under fire on social media last year for a series of ads showing stereotypical images of Chinese life.

By Benjamin Hass
The Guardian /Reuters

How E-commerce is transforming rural China

Society editor - 06/10/2017
0
A woman in southern China went blind in one eye after playing a controversial mobile phone game for a whole week. The 21-year-old woman suddenly...

Social media editor - 06/08/2017
0
Enterprising internet users in China fear the tools they use to tunnel through the country's "Great Firewall" may soon disappear, as Beijing tightens its...

Innovative Chinese ‘unicorns’ spring on to the global stage

human rights editor - 20/05/2017
0
Guo Wengui (aka Miles Kwok), a Chinese billionaire with suspected ties to China’s state security apparatus who is currently living in New York, has in recent...

Art & Entertainment editor - 14/11/2018
0
Chinese nuclear scientists have reached an important milestone in the global quest to harness energy from nuclear fusion, a process that occurs naturally in...

Business editor - 06/03/2017
0
South Korea's Lotte Group said on Monday four of its retail stores in China were closed after inspections by authorities, as Seoul protests at...

President Trump says he’s working with China to save ZTE

China complains to U.S. over lawmakers visit to Dalai Lama

Why the Chinese Will Pay for Content That Americans Won’t

Lifestyle editor - 24/05/2017
0
Back in early 2016, Li Xiang was just another overworked magazine editor in Beijing. Then along came an opportunity to produce a business newsletter...

US china editor - 16/12/2020
0
Senate majority leader Mitch McConnell, the most senior Republican in the US Congress, has congratulated President-elect Joe Biden on his election victory, even as...

Trade editor - 03/05/2018
0
A U.S. trade delegation arrived in Beijing on Thursday for key talks over tariffs, with Chinese state media saying China will stand up to...

chinese communist party editor - 31/05/2019
0
Carrie Lam survived the first motion of no-confidence against her with the backing of the pro-Beijing majority in the legislature on 29 May. Democratic...

News editor - 07/01/2021
0
Vice President Mike Pence has formally declared Joe Biden as the next President of the United States of America. It came hours after supporters...

In ‘China’s Jerusalem’, ‘anti-terror cameras’ the new cross for churches to bear

human rights editor - 03/04/2017
0
Christians and government ­officials have come to blows over demands that churches in a city known as “China’s Jerusalem” ­install surveillance cameras for “anti-terrorism...

Politics editor - 25/10/2017
0
The most important political event of 2017, the 19th Chinese Communist Party Congress, has concluded. And while there was much to digest, one image...