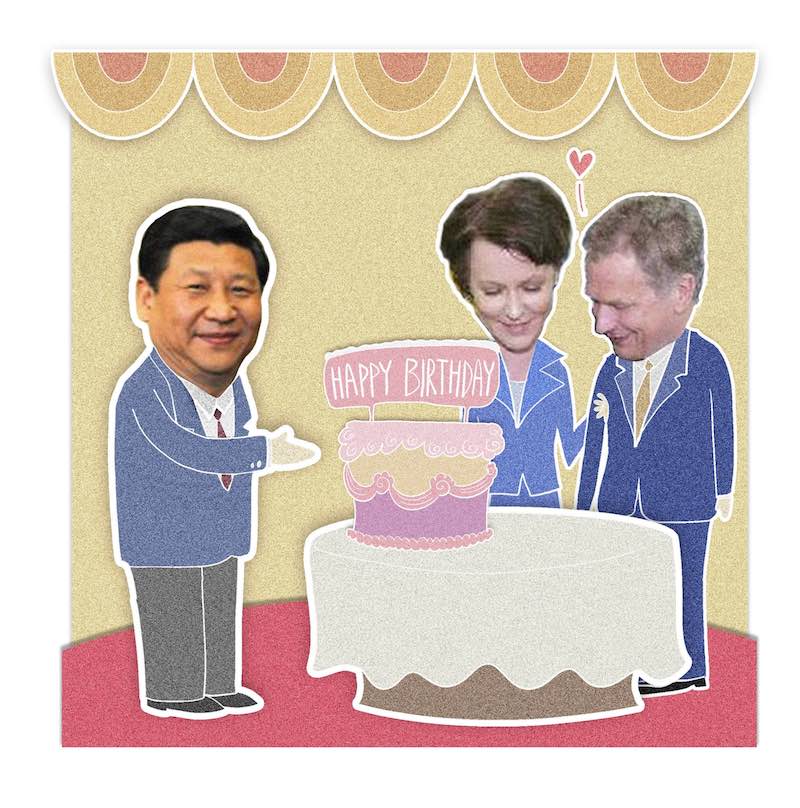 Press. Xi presented a birthday cake to the spouse of Finnish President Sauli Niinisto, Jenni Haukio.
Because the birthday of the Ms. Haukio coincided with the day of the opening ceremony of the Boao Forum for Asia in 2013, they received a gift from Xi Jinping and his spouse Peng Liyuan: a birthday cake. Niinisto said, “We will never forget that moment, such courtesy and surprise was the best gift for us.”

1. He worked as a farmer for seven years when he was young
Xi Jinping spent his youth in the rural areas of northwest China. In early 1969, when he was just 16 years old, Xi Jinping took the initiative to apply to relocate from Beijing to the countryside. He lived a rural life for seven years, ploughing land, pulling coal, building dams, and collecting manure. Xi Jinping would do whatever work needed to be done. The local people said he “endured hardships and worked hard.”

2. He likes to read: He once walked 15 kilometers to borrow a Western classic
Xi Jinping likes to read Chinese and foreign masterpieces. When he was young in the countryside, Xi Jinping once walked 30 li (15 kilometers) to borrow Faust; after he finished reading What is to Be Done? he learned to sleep on a Kang bed-stove through perseverance; and he visited the breakwater where Ernest Hemingway wrote The Old Man and the Sea and dropped by the bar that Hemingway visited frequently in Cuba, which gave him a deep impression.

6. He presented a birthday cake to the spouse of Finnish President Sauli Niinisto
Because the birthday of the spouse of Finnish President Sauli Niinisto coincided with the day of the opening ceremony of the Boao Forum for Asia in 2013, they received a gift from Xi Jinping and his spouse Peng Liyuan: a birthday cake. Niinisto said, “We will never forget that moment, such courtesy and surprise was the best gift for us.”

7. His all-out fight against corruption has gained public support
After taking leadership of the Party at the end of 2012, Xi Jinping declared that he would “fight every corrupt phenomenon,” and since then, a large number of corrupt officials have been disciplined in accordance with the law, including more than 100 officials at or above the ministerial level.

It is the first visit by a Chinese head of state to this Nordic country in 22 years.

In a written speech delivered at the airport upon arrival, President Xi first extended congratulations to the Finnish government and people as this year marks the centenary of Finland’s independence.

“Since China and Finland established diplomatic ties 67 years ago, our relationship has maintained a steady and sound development no matter how the international landscape changes,” Xi said.

“Our relationship has become a model of friendly co-existence and mutually-beneficial cooperation between countries that are different in population and size, history and culture, social system and development level,” he noted.

Xi said he looks forward to having in-depth exchanges of views with Finnish leaders on the China-Finland relationship and other issues of mutual concern, thus charting the course for the future development of the bilateral relations.

“I believe that with concerted efforts of both sides, my visit will achieve a complete success,” he added.

During his stay in Helsinki, Xi will hold talks with Finnish President Sauli Niinisto, and meet with Prime Minister Juha Sipila and Speaker of the Finnish Parliament Maria Lohela.

China and Finland have enjoyed long-term friendship and cooperation.

The two countries upgraded their ties to a future-oriented new-type cooperative partnership in 2013, when Niinisto paid a state visit to China.

The two sides have cooperated in areas such as high technology, clean energy, innovation and Arctic research, and further cooperation on winter sports is expected as China will host the 2022 Winter Olympic Games.

Xi’s visit to Finland is his first trip to a European Union member state this year, and also his first visit to the Nordic region as president.

After Finland, the Chinese president will travel to Florida, the United States, for a meeting with U.S. President Donald Trump on Thursday and Friday.

That will be the first meeting between Xi and Trump as the heads of state of the two biggest economies in the world.

CCP’s three major telecommunications companies delisted by NYSE; what does that...

Xi is willing to compromise anything economically if the U.S. endorses...