Chinese President Xi Jinping has touched down in Hong Kong amid unprecedented security for his first official visit to the city as it marks 20 years of Chinese rule.

Xi’s plane landed at Hong Kong International Airport around 12 p.m. local time Thursday, and a heavily guarded motorcade is expected to take the president to his hotel in the city center.

The handover anniversary is a “huge event for the country,” Xi said after arriving. He praised Hong Kong’s achievements in the last two decades and said he wants to make sure “one country, two systems” — the policy by which Hong Kong retains limited autonomy and freedoms — continues.

On Saturday Xi will address a ceremony to mark two decades since sovereignty over Hong Kong was handed from Britain to Beijing.

Huge banners have been placed over the highway Xi will take to the city, welcoming him for his “official inspection” and celebrating “20 years of Hong Kong’s return to the motherland.”

Chinese and Hong Kong flags have also been hung from windows and buildings, though critics of Beijing have taken angrily to social media to denounce the displays.

Protesters have said they will target Xi at all of his engagements, though it remains to be seen how close they will be able to get to the Chinese leader. 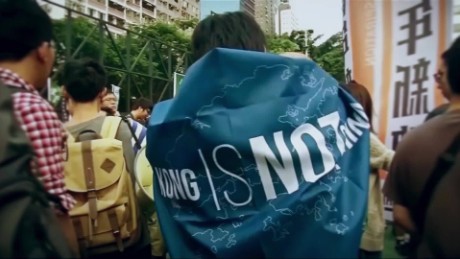 Much of Wan Chai, a bustling business district in the city center where Xi will stay, is on partial lockdown, with 300, 2-ton barricades erected on roads around the Hong Kong Convention and Exhibition Centre. The venue will host many events marking the city’s handover from the UK to China.

Around 11,000 of the city’s 29,000 police officers will be involved in security arrangements for Xi’s visit, according to the South China Morning Post.

During a visit last year by Zhang Dejiang, the third-highest ranked Chinese leader, sidewalks were glued down in key areas to prevent protesters from breaking them up and using them as missiles.

Local media reported this week that police were under instructions to prevent banners and signs that might “embarrass” Xi from appearing within his eyesight.

Barriers were also briefly erected around a statue of Queen Victoria in a central Hong Kong park named for the long-reigning British monarch, but they were removed after complaints. 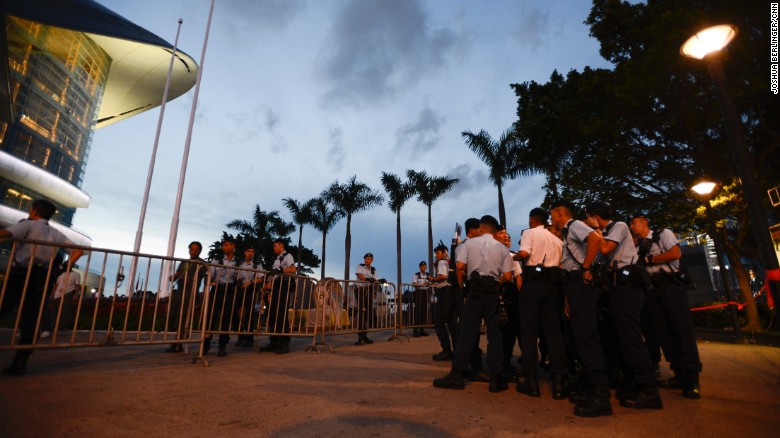 Police arrested protesters in Hong Kong’s Golden Bauhinia Square ahead of the 20th anniversary of the city’s handover to China on Wednesday.

While in Hong Kong, Xi will spend little time anywhere near the public.

On Thursday evening, he is expected to have dinner with Hong Kong Chief Executive CY Leung and his successor, Carrie Lam, whom Xi will swear in on Saturday.

Xi is also expected to visit a People’s Liberation Army base. China’s military has always had a major presence in Hong Kong since the handover, but it has kept a low profile until recently.
An elaborate celebratory gala will be held Friday evening at the Hong Kong Convention and Exhibition Centre, attended by Xi, Leung, Lam and other dignitaries.

Protests are expected outside the event, and at a separate rally by pro-Hong Kong independence activists, who have called for their supporters to gather together and “crush Chinese colonialism.”

Xi will leave the city on Saturday after swearing in Lam and attending a flag-raising ceremony to mark the 20 years since China assumed sovereignty over Hong Kong.

Attention will then turn to the annual July 1 pro-democracy march, which organizers expect to attract hundreds of thousands of people.

Religion editor - 31/08/2020
0
Tens of thousands of ethnic Mongolian students and parents are demonstrating in northern China over unannounced plans by the Chinese government to phase out...

Breaking! Mr. Steve Bannon back to the Capitol Hill as President Trump’s adviser

Donald Trump contracted the coronavirus. How can he get through this?

trade war editor - 01/08/2019
0
Donald J. Trump‏Verified account @realDonaldTrump 56m56 minutes ago ...We look forward to continuing our positive dialogue with China on a comprehensive Trade Deal, and feel that...

Society editor - 15/12/2017
0
A Chinese university has banned Christmas celebrations in an effort to protect young people from what it calls the "corrosive" influence of Western culture. China’s Global...

Guo Wengui editor - 24/09/2020
0
Dear brothers and sisters, good morning. Today is September 23. I have been really busy these two days. Because of the death of Justice Ruth Ginsburg,...

Trump-Xi Summit’s Top Accomplishment: Getting to Know Each Other

Politics editor - 08/04/2017
0
U.S. officials said President Donald Trump’s first meeting with Chinese President Xi Jinping this week was an opportunity for the leaders of the world’s...

Politics editor - 31/07/2017
0
A massive military parade through China's desert overseen by its military chief and president, Xi Jinping, was lauded as a "first" in blanket coverage...

Society editor - 12/09/2017
0
A Beijing court on Tuesday sentenced the architect of the $9 billion Ezubao online financial scam to life imprisonment, and handed down jail time...

Uncategorized editor - 29/01/2018
0
Aggressive lending of hundreds of millions of dollars on discounted terms by China in the South Pacific is leading to financial distress in the...

Society editor - 09/07/2020
0
Heavy downpours continued to wreak havoc across vast stretches of China on Wednesday as the country renewed its alert for rainstorms and multiple provincial-regions...