The Chinese government has been accused of spreading propaganda to British university students and schoolchildren.

The Confucius Institute, which operates in 26 UK universities, aims to help teach the Chinese language and promote culture. But critics say it is a ‘Trojan horse’ designed to spread the views of the communist regime.

Teaching materials show the disputed territories of Tibet and Taiwan as clearly belonging to China, while tutors say they are told to avoid discussing sensitive subjects such as the 1989 Tiananmen Square massacre. 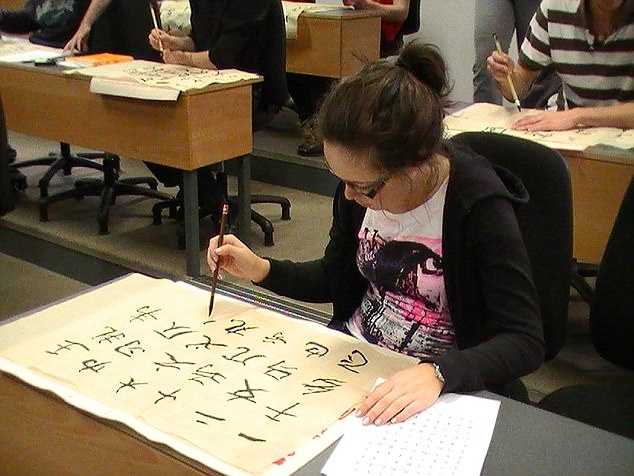 A Student of UCD Confucius Institute for Ireland writes in Mandarin

One former tutor, Sonia Zhao, 31, said: ‘I wasn’t comfortable at all. I should have had the freedom to tell my students what I really thought about those issues.’

The Institute, which also works in primary and secondary schools, is sponsored by the Beijing government. It has previously been expelled from universities in the US, Canada and Japan because of concerns over ties with the Communist Party.

The Mail on Sunday has found that the Confucius Institute at University College London (UCL) had provided the controversial maps for schools.

Former Minister Norman Baker said: ‘The Confucius Institute is a Trojan horse to portray a version of the world favourable to the Communist Party in China. It is very disturbing that the party, through its front organisation, is peddling untrue information.’

Ellen Lees, of Students For A Free Tibet UK, called for an inquiry, describing the Institute as ‘a propaganda machine [that] pushes a false version of history’.

But defenders of the Institute say there is little hard evidence to show it promotes propaganda or suppresses free speech. And UCL said last night: ‘The Confucius Institute’s sole focus is the development of the teaching of Chinese language in schools.’

By Jonathan Petre
DailyMail on Sunday

Social media ban: battle of life and death has begun

Google and Twitter will be punished for their abuses