Two Chinese Su-30 fighter jets intercepted a US Air Force radiation detection plane over the East China Sea Wednesday, according to the US Pacific Air Forces.

The US crew aboard the US Air Force WC-135 characterized the move as “unprofessional,” according to the statement from Air Force Lt. Col. Hodge.
“While we are still investigating the incident, initial reports from the US aircrew characterized the intercept as unprofessional. The issue is being addressed with China through appropriate diplomatic and military channels,” Hodge said.
Earlier, a US official told CNN the Chinese jets came within 150 feet of the US plane, with one of the Su-30s flying inverted, or upside down, directly above the American plane.
However, Chinese officials disputed that claim Saturday, saying the “US version of the event is inaccurate.”
“On May 17, a US surveillance plane was conducting surveillance in China’s Yellow Sea airspace. Chinese military aircraft identified and verified the US plane in accordance with law and regulations. Their operations were professional and safe,” said China’s Defense Ministry spokesman Senior Col.
“The frequent close-in surveillance by US military ships and aircraft is the root cause to the issue of China-US military safety at sea and in the air. We hope the US side will stop such surveillance activities to avoid such incidents from happening again.” 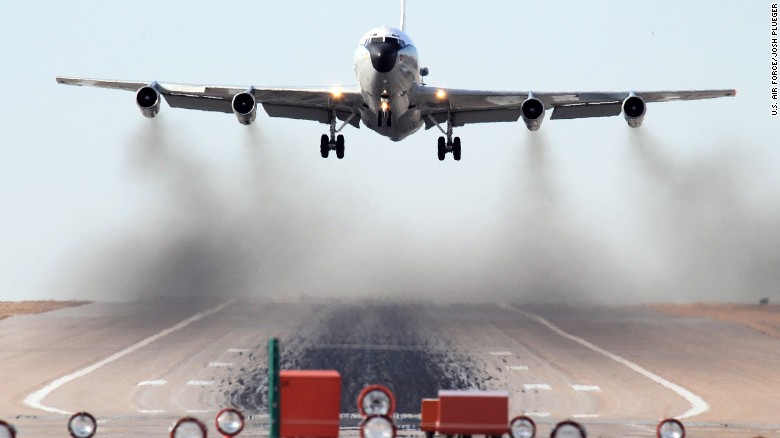 Wednesday’s incident was the second between US and Chinese planes this year.
In February, US defense officials said there was an “unsafe” close encounter between a US Navy P-3 Orion aircraft and a Chinese surveillance aircraft over the South China Sea.
In that incident, a US official told CNN the US Navy plane had to alter course to ensure there wasn’t a collision with what one official said was a People’s Liberation Army Air Force KJ-200. The planes came within 1,000 feet of each other, US officials said.
After the February incident, US officials said close encounters between US and Chinese forces are extremely rare, with no such incidents in 2015 and two in 2016.
Dubbed the “Constant Phoenix,” the four-engine WC-135 jet looks for distinctive elements a nuclear test of any type would emit into the air. The collected samples can be analyzed to determine exactly what occurred.
The WC-135 has been regularly deployed on routine missions in Northeast Asia, according to the US official. The planes have been used in the past to gather evidence of possible nuclear tests by North Korea. The Air Force has two of the WC-135 jets that operate out of Offutt Air Force Base in Nebraska.
By Ryan Browne and Brad Lendon
CNN

Officials fired after being confronted over dereliction on TV

Politics editor - 17/02/2017
0
Three high level officials in Xi'an, Shaanxi province were sacked after failing to defend themselves amid accusations of dereliction of duty during a local...

Money editor - 16/05/2017
0
HONG KONG — A global cyberattack spread to thousands of additional computers on Monday as workers logged in at the start of a new...

More than a third of Chinese millionaires want to leave China, here’s where they...

Money editor - 05/07/2018
0
The U.S. is the top destination among Chinese millionaires looking to move their families, and money, to another country, according to a new study. More...

Uncategorized editor - 01/08/2017
0
China's debt surge shows what's working for the global economy and what could go badly wrong. Without the country's massive stimulus in 2008, one of the...

Guo Wengui editor - 03/02/2019
4
Miles Kwok tells today that the registration of the Rule of Law Foundation is finalised and ready for operation (www.rolsociety.org) with the mission and...

Guo Wengui editor - 30/01/2020
0
I have insight understanding of the Security Ministry of the Chinese Communist Party (CCP). Its military intelligence authorities spent lots of money on World...

Guo Wengui editor - 12/07/2017
0
“Life at the top” is how the penthouse at the Sherry-Netherland hotel is described in marketing materials. But the 9,000-square-foot spread is more like...

How the Chinese ‘red aristocracy’ has snaked its way into the heart of western...

chinese communist party editor - 12/07/2020
0
Top communist party leaders in China are known as the ‘red aristocracy’, and, for all their professed belief in equality, they like to ensure...

Guo Wengui editor - 11/12/2020
0
On 10th December 2020 Miles Guo held a live broadcast for the members of the Whistleblower Movement on gtv.org. He warned again about the dangers...

Miles Guo: Covid-19 is not a virus but biological weapon

Remarks by President Trump and Vice Premier Liu He of the People’s Republic of...

xinjiang editor - 14/05/2019
0
New research suggests that China may have undertaken large-scale destruction of Islamic sites in its western Xinjiang province, where Muslim minorities such as Uighurs live under...

Business editor - 05/05/2017
0
China's first large domestically made passenger aircraft has completed its maiden flight, mounting a major challenge to Boeing and Airbus. After about 90 minutes in...

Society editor - 26/07/2018
0
A vaccine scandal in China began building slowly and then suddenly, this weekend, it was everywhere at once. The story began back in November, when...

Guo Wengui editor - 10/08/2019
0
You may have watched the developments right now in Hong Kong. On the date of August 4, about 30 thousand PLA people have entered...

Business editor - 09/06/2017
0
A newly created institute between the state of California and China's Tsinghua University is planning to push ahead on climate change policies in spite...